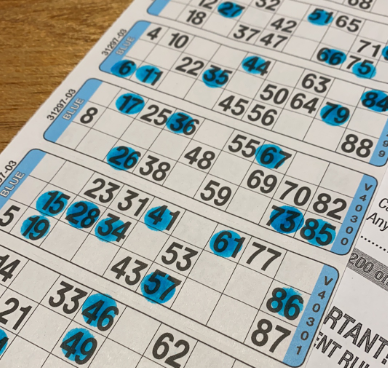 A little while ago a friend suggested that a group of us meet up for bingo at the local RSL club since we were all on holidays at the same time. We had gone years ago and had so much fun, we thought why not?

It was great to catch up, but my god I forgot how serious bingo can be!

I highly recommend that you don’t go after you’ve had a bad night sleep. Like, for example if your son wakes up at 2am crying from a “nightmare” (he dreamt that chocolate was under his mattress and he was devastated that he was crushing it). Or when he then wakes up at 3.30am crying because he’s kicked the blanket off in his sleep and wants you to pull it back up again. Seriously buddy?

I was thankful for the caffeine running in my system that helped me to keep up! I’m a notorious multi-tasker, so the strain of focusing on one thing at one time was intense!

Also, I was shocked to discover they only accept cash! I don’t remember the last time I carried cash in my wallet, and apparently it’s been that long the cards in my wallet had expired. I kicked myself, since the new cards were sitting on my desk at home waiting to be activated and replaced, and the ones in my wallet expired only mmmm….three months ago. Whoops. Thankfully my friend came to the rescue and I borrowed $25 from her to join in.

After bingo I headed to the gym to complete my 10k running sesh. As I was running my hip felt a bit finicky, but it wasn’t painful so I pushed on.

At some point I will learn to listen to my body. As of tonight my hip is extremely irritated and it hurts to walk. I’ve iced it and tried stretching/foam rolling, and from here I’m going to have to rest it.

So, I’ve made the call I’m going to park my run training until the second half of this year. Last week I only just came back from a sore back, also caused by my hips. I know my strength is lacking, especially in my core, and I think I’m now seeing the impacts on my running. I just keep hurting myself over and over again.

So, it’s a 6 month hiatus from running. Instead, the plan will be:

By the time I’m ready to run again I should hopefully be stronger, lighter, and read to kick some serious ass.

I’m surprisingly OK with this decision. I know running is my happy place but there’s absolutely no point trying to continue with it if I’m just going to keep hurting myself. And I’m still absolutely going to be moving, it’s just a bit slower. I want to keep my running events going, there’s no reason I can’t walk them.

So, two steps forward, one step back. Crap pun intended.