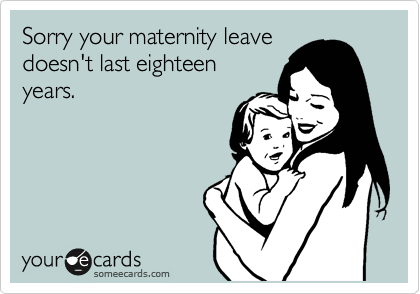 I was thinking the other day about the term “when maternity leave ends”. Does that mean going back to work in any sense? Or part time? Or full time?

In my own mind, it means when I go back part time (at least longer than what I’m doing right now). At the moment I’m doing a measly 5hrs a week. Mum looks after the bub on Monday and Tuesday afternoons for a couple of hours each day, while I lock myself in my study and work. It’s not many hours, but it’s enough just to keep in touch with what’s going on and collect a little bit of coin. 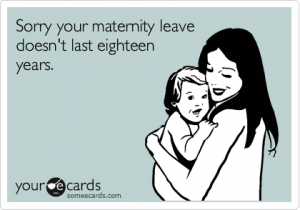 At the start of May I’ll return back to work for 2 days a week. I’m excited by it, but also not. I’m going to miss my little guy! There’s a lot of pros to returning to work, of course. I’m extremely excited to get back to something that I enjoy. It’s great to use my brain and feel useful for something other than my milk supply (sarcasm of course). I’m excited by having adult conversations again that centre around something other than my child, although let’s be honest, I’ll probably just talk about him to everyone for the first month.

“Did you know my son breathes?! Like, actual air?! HE’S AMAZING!”

But, it’s time to go back to work and thus the preparations have begun.

The little man started at daycare this week. He’s only attended half a day so far, but his next session will be a full day. I really love the daycare we’ve selected. The staff are really lovely and welcoming. They’ve been happy for me to visit as often as I wanted in the lead up, and we spent a couple of days there playing in the room with Luca so it didn’t feel so foreign to him.

When his first day arrived I started to feel quite wary about taking him. In my mind I was coming up with all reasons why not to bother, but I knew I had to. I took him down, got set up on the systems so I can get in and out for drop-off/pick-up, then we took him into the room. There were a few more kids there than we’d seen in the past, and the room was a lively hive of excitement. We put his bag away (buying that was an ordeal, he feels too little to have his own bag already) and the breast milk I’d prepared.

Then it was time for me to leave.

I handed him over to one of the girls there, and I was thrilled when he greeted her with a huge grin. He’s been great about being held by various people, so I knew that wouldn’t be a concern. She gave him a bit of a cuddle, then put him on the floor. He instantly flipped onto his tummy and started playing with the carpet.

I knew I had to rip the band aid off, so I turned and walked out of the room without a further glance. Really, all I wanted to do was sit down on the floor with him and play.

Back in the car…

I cried. I’ll admit it. I’m pretty sure I looked like this.

The feeling is so hard to explain. It’s like a cross between feeling like I’m abandoning him, and being selfish. Logically I know daycare is going to be a great place for him. He’s going to be intellectually stimulated, get to spend time with other kids, and build his immune system (I’m fully prepared for him to get sick). But still…I’ve just spent 6 months every day with this little guy, I’m not sure I’m ready for him to go yet!

I rang an hour later to find out he was crying, but while we were on the phone they managed to get him to settle. We agreed I’d call back in about half an hour to see how he was going. If he was still upset then I’d head down to collect him. I hoped that wouldn’t be the case as I didn’t want him distressed, and it would make him getting settled into daycare a lot harder. I updated Mario on his progress, and we decided he would make the next call in half an hour. When he phoned, he received the news Luca was totally fine and sleeping. It seems that when I told the staff he’d be ready for his next nap at about 10am that I was bang on, and his tears were just from being tired. He managed to fall asleep for 45mins – better than his 30min average at home!

I kept myself busy by picking up the groceries, then back at home doing some work, cleaning and having a long and glorious shower. Then suddenly it was time to pick him up again!

When I arrived I was told he’d been fantastic, and they all loved him. There were lots of smiles during the day, and he’d been a great little guy. He’d only been there for a total of 4 hours, but it was enough that it was perfect for his first day.

When I walked in I said “hey bubba!” and he either didn’t hear me, or ignored me. Either way, he stayed laying on his tummy playing with the toy in his hand. When he finally turned and saw me he started whimpering and moved his hands requesting to be picked up. I know it’s silly, but I was so glad he hadn’t forgotten me! I instantly scooped him up for a snuggle.

When we got home he had a big feed, then cuddled into my arms. Within minutes he’d passed out. Normally I’d put him in his bed to sleep, but hey, I missed him and wanted cuddles! I sat watching telly while he slept in my arms. After an hour (a miracle for him on the sleep count), he woke and I shifted him to a sitting position in my arms. He snuggled in again, and to my surprise was out for a second time lasting another hour. 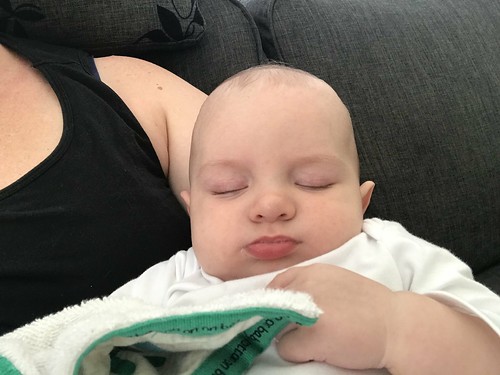 Mario arrived home from work soon after, and eagerly waited his turn for cuddles. When Luca woke, Mario picked him up and carried him around the house cuddling. The next minute – boom, he was out again! Daycare definitely wore him out! In total he slept for 3.5 hours!

There’s still just under three weeks until I return back to work, but we wanted to get him eased into daycare before I go back. That means a total of 5 days remaining that he’ll be in daycare when I have time to myself.

Day 2 is coming up again later this week. It will be a full day this time, so I’ve got a lot longer to get through.

First up I’ve booked myself an eye test for the morning. I’m also hoping to finally use the pedicure voucher I received from my friend. Then I’ll probably head home and do some of the deep cleaning I have planned: washing the windows with the steam cleaner (they’re filthy), cleaning out the oven, and some other bits and pieces. I might also finally get in front of the sewing machine and work on the quilt I’ve been trying to make for ages.

Or I might just have a long sleep in bed.

Ok, that just made me feel a little bit more excited by the prospects of things that I can get done while he’s in daycare. After all it’s been a long time since I’ve had time to myself and not had to worry about him. But I’m still going to miss the little guy!

I guess we can add this as another notch of the road of being a mother.

And I’m also now fully prepared to bawl again on his first day of school. And last. And many, many more times…amiright?

2 thoughts on “First day at daycare…”