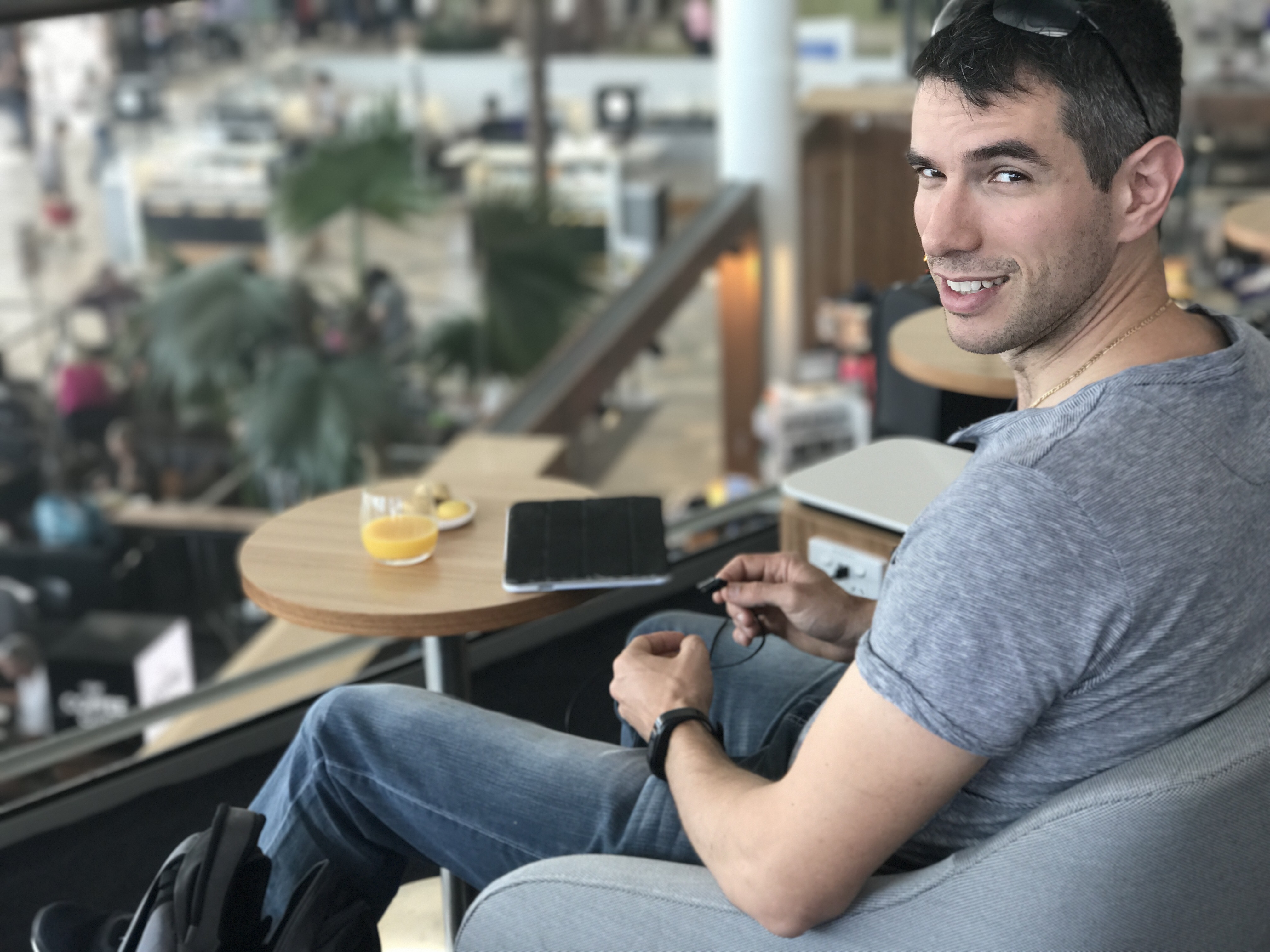 Well, we’ve made it! Today was all about the travel, and the process of getting here. Mario doesn’t fly too well so we booked into a hotel near the airport so that he could get to bed pretty early without fuss. Tomorrow we will be travelling by bullet train to Kyoto, so there will be lots of exciting news to report in!

The downside to booking flights with Qantas is that we couldn’t choose our seats until we had booked our flights, which I had found a bit annoying (unless I did it wrong). Unfortunately all the seats in the exit rows had already been taken, which meant that Mario would have to sit in one of the regular seats. The challenge with that is that he’s 6ft 4, which means for him flying is awkward at best due to the lack of leg room.

I had gotten a bit balsy, and on a whim had contacted Qantas to see if there was any chance of getting a complimentary upgrade to business so he had legroom. I explained that my family had a long history with them – my late Grandpa only flew Qantas, and when he was lost his life in a car accident overseas we flew him home on a Qantas flight. It was my first time flying Qantas as they had always been much more expensive than the others, and so it was so exciting when we were able to fly them for the trip to Japan. And finally, it was our honeymoon!

To his credit, the Qantas staff member didn’t automatically tell me to bugger off. Instead, he organised a complimentary gift to be sent to us, and said that he would pass on the details to the staff on board so they would take care of us. The gift turned out to be two passes to the business lounge at the airport! 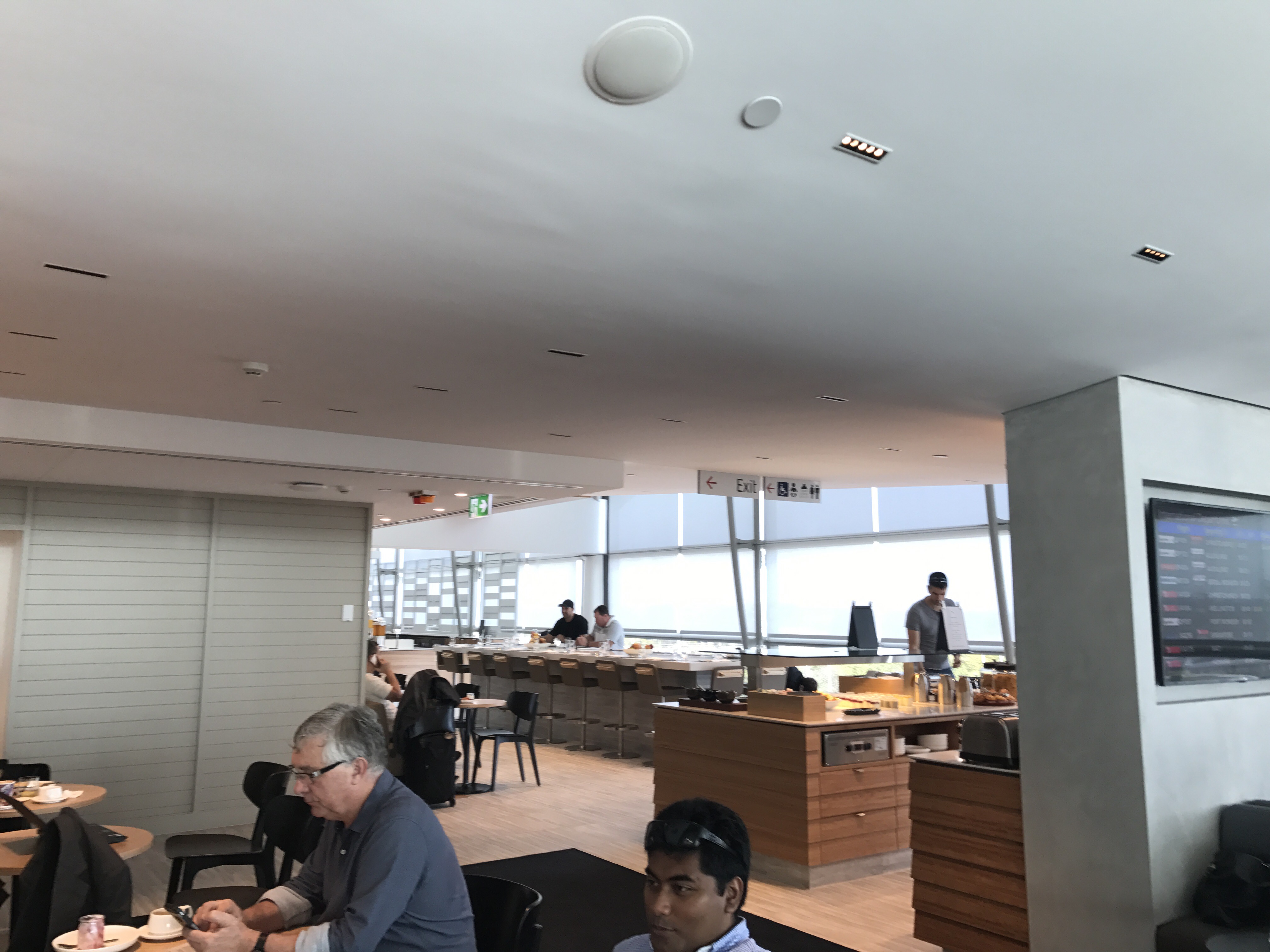 The only time I have been in a flight lounge is on a trip home from Sydney, when my former boss had membership to the velocity lounge and was able to take me in as a guest. That was at my previous job, some 5 years ago. Needless to say I had barely any recollection of it other than thinking it was nice.

Qantas have just completely refurbished theirs, which for me was exciting in itself because it meant I could something before my sister, the world class traveller!

By the time we had checked into our flight, dropped our bags and made it through customs we had just over 2 hours before our flight. We grabbed some breakfast and sat down. I have to admit that while it’s nice that it was free, it was disappointing that it was cold. I had scrambled eggs, chipolatas and tomato with a mango yogurt on the side. The pastries area was much nicer, and they had a great selection of seeds and yoghurts. The bread bar was also great, although in true Kelly form, I burned my toast. Kitchens and I just don’t get along. I also found the cutlery design fascinating. 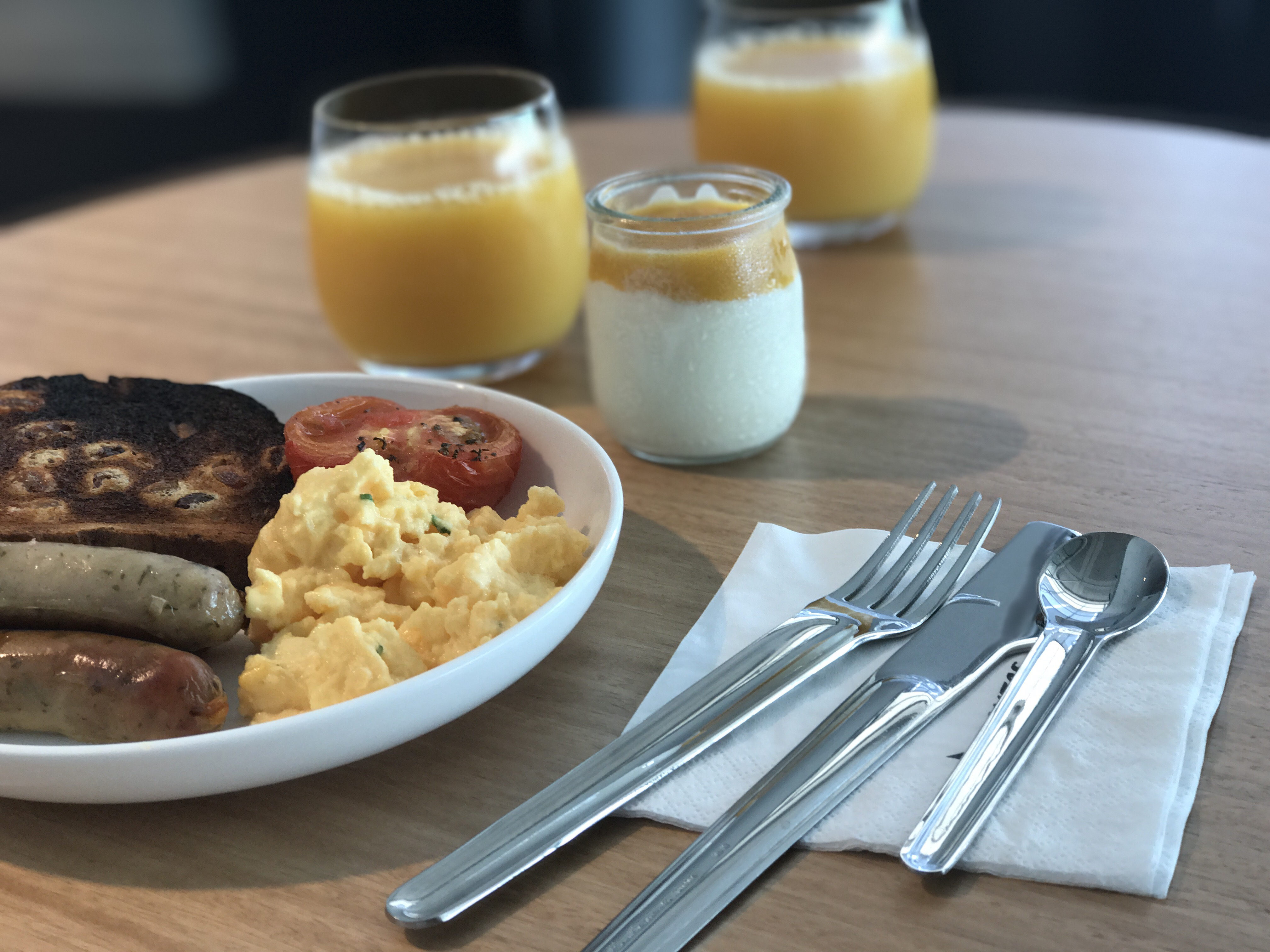 They had a barista there, and while I sat down Mario grabbed me a flat white, which was pretty great. By this time we had moved over to the seats overlooking the international terminal, and it was lovely to just sit and watch planes taking off and landing. I had discovered a tea bar by this stage, a wall dedicated to different teas and syrups. I made myself a tea in a gorgeous cast iron kettle (my favourite thing of the whole experience), did some final charging of my devices on the power points, and settled in. The time passed quickly, and soon it was time to board.

There is one thing I will never, ever forget when flying with Qantas. I share this knowledge with everyone in the hopes that this prevents any issues in the future.

Disclaimer: I had seen an email talking about this but in the craziness of the wedding it had slipped my mind completely. In the lead up to your flight you’re able to reserve a meal online so that you can guarantee your selection. If you don’t, you get the pickings of whatever is left onboard.

Unfortunately by the time they reached us for serving there was only one chicken salad left, and the rest was salmon. I don’t eat seafood and salmon makes Mario sick, so I had proposed I have the salmon meal and just eat everything else but salmon, while Mario had the chicken salad. Instead, the staff were able to get some bits and pieces for us from the business class and serve that to Mario for his lunch meal. I felt horrible though, and he tried to play it off like he didn’t mind. 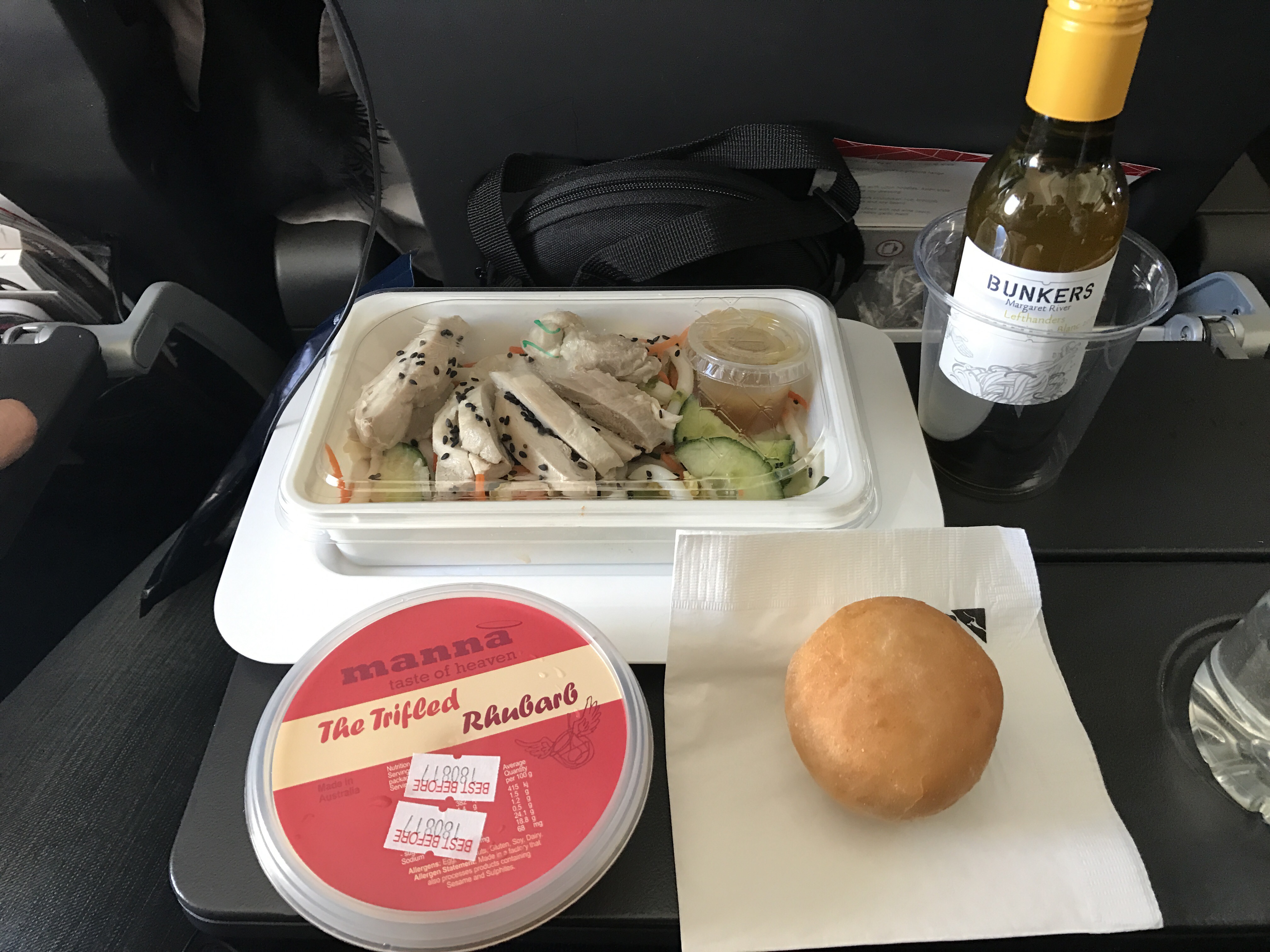 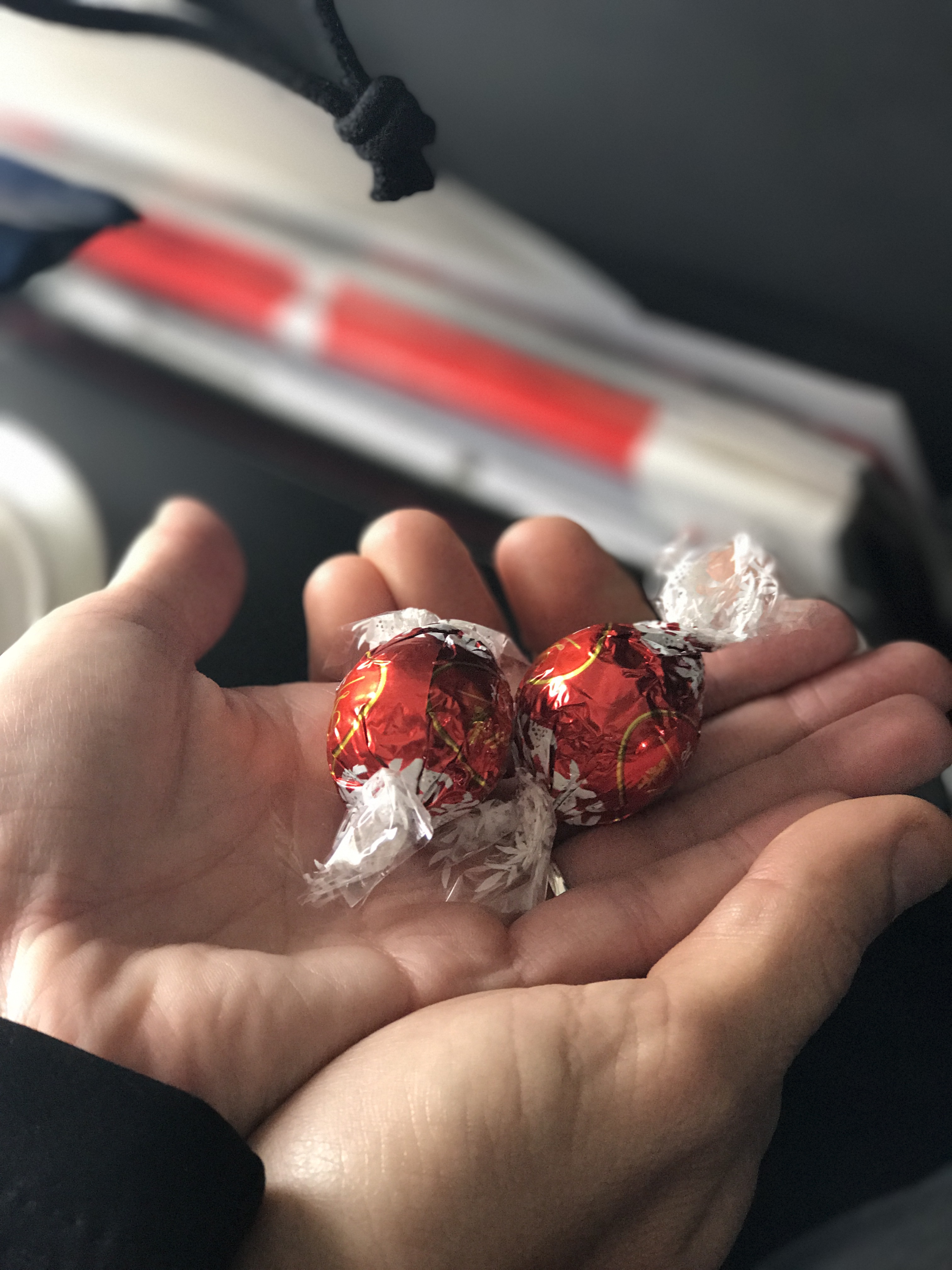 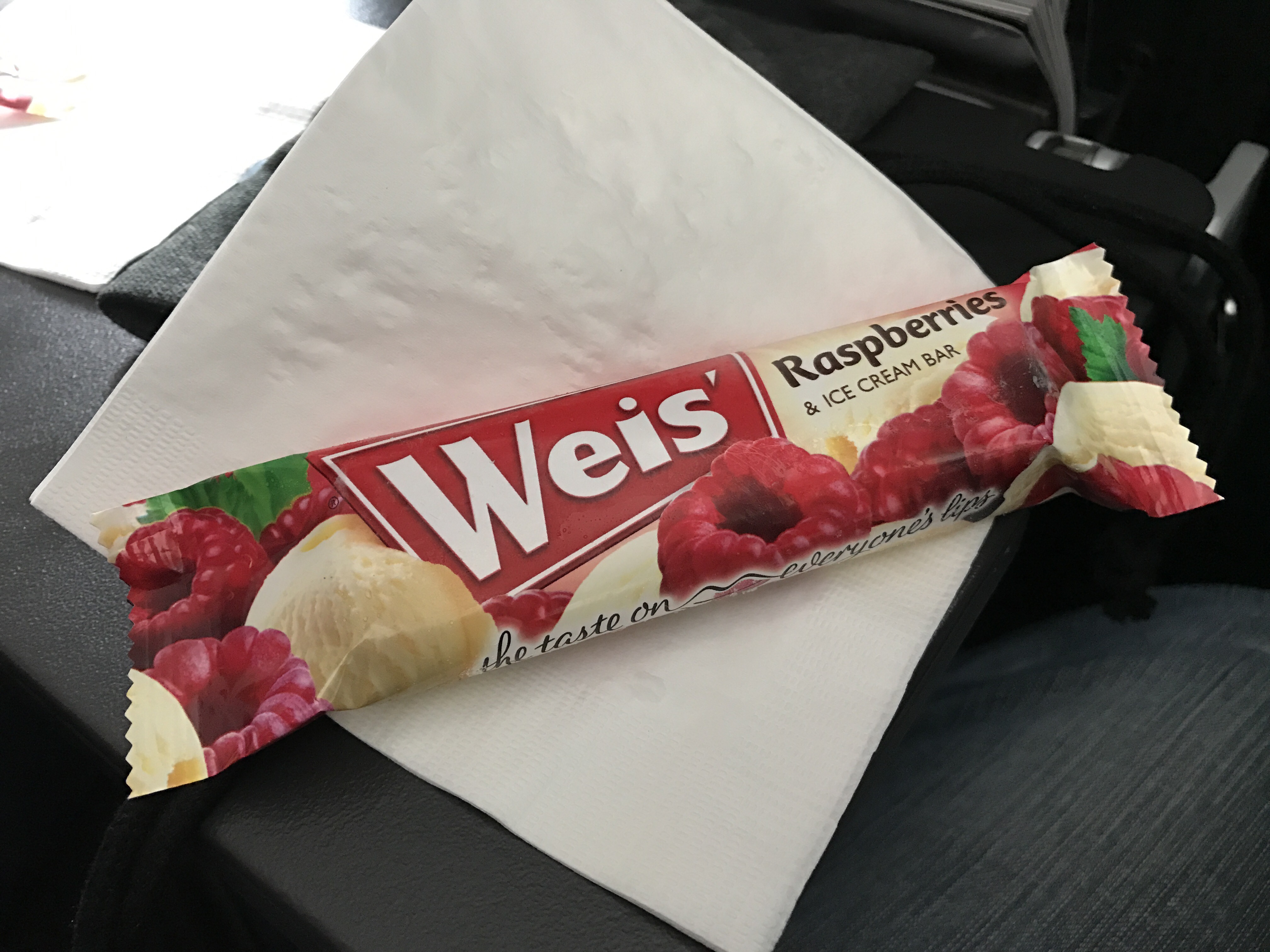 I passed the time on the plane by watching some movies (Central Intelligence – not as good as I was hoping, it felt like The Rock’s character was a bit over cooked – and Bad Moms), and reading. In fact, half of this blog post was drafted on the plane. Another cool side note with Qantas, you get a complimentary 12 hour pass with Press Reader with your flight so I went a bit crazy downloading magazines to read.

The plane was in a 2-4-2 formation, and we were in a 2 seat which was fantastic! We could get up at any time without much fuss, and we certainly took advantage of that. We both drank a fair bit of water, judged by the number of times we needed to pee. I also decided I would use the opportunity to do squats and exercised in the bathroom, not something that I normally do but as we have tons of walking planned I wanted to make sure I wasn’t going to be left with swollen ankles. I already wear compression socks because of the damage to my legs from my knee recon, and after the flight I was glad to see I’ve pulled up well!

All up the flight felt like it went pretty quickly. When we got to the airport we blitzed through customs, and before we knew it we found ourselves outside waiting for the shuttle bus to the hotel. Later we realised we forgot to exchange our JR Pass for our rail pass, but given we can do that tomorrow at Tokyo station it wasn’t a big deal.

The hotel is nice (The Radisson), but no real culture shock yet as it’s pretty westernised. The wifi has come in handy to phone home and report our safe arrival.

In the cards for tomorrow is our first bullet train (Shinkansen) travelling to Kyoto. There’s no guarantees of what wifi we have or allowances, so I’m not sure when the next post. will be. I figured I would just take advantage of the wifi today while I could to report in an update.

Anyone been to Kyoto before. Any hot tips for us?

2 thoughts on “Sofies on tour: Australia to Japan”