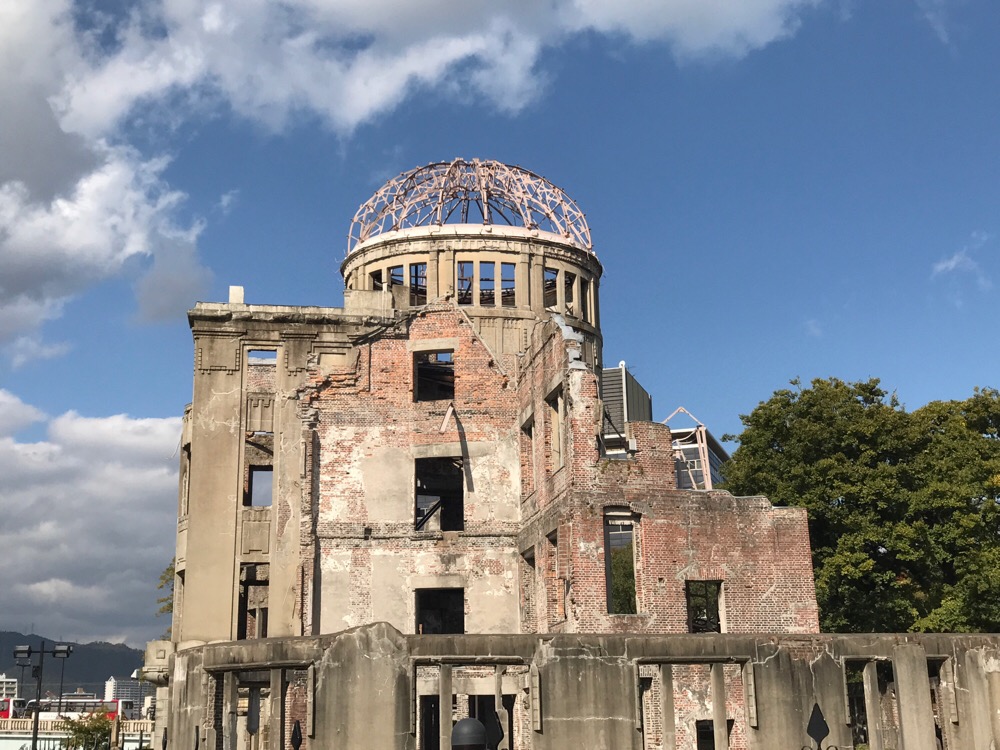 After a mammoth day the day before, we had agreed on having a bit of a lazy morning. We “slept in”, meaning until just after 6am, and I spent the next hour in a blissful state of having a bath and reading my book. Even though the tub was tiny, it was deep, and I really enjoyed being immersed by the water. At home I can stretch my legs out but the water is nowhere near as high, so funnily enough I actually preferred the feeling of the Japanese tub! Afterwards I washed and dried my hair, then attempted to straightened it as an impatient Mario hopped from foot to foot. Apparently I was the only one who had wanted the lazy morning, or he’d forgotten about it.

We got dressed and headed for the station, our backpack full with items for the day. We headed to the train station to reserve our tickets for the Shinkansen to find that we first had to catch a local train, then cross over onto the Shinkansen at the next station. We realised just how comfortable we had become in our surroundings as we had 8mins to get to the next platform, and made it with ease. It was Saturday, and the train station had become remarkably busier. The local train was also quite full so we had to stand, but it was only about 10-15mins to the next station so it wasn’t a big deal. 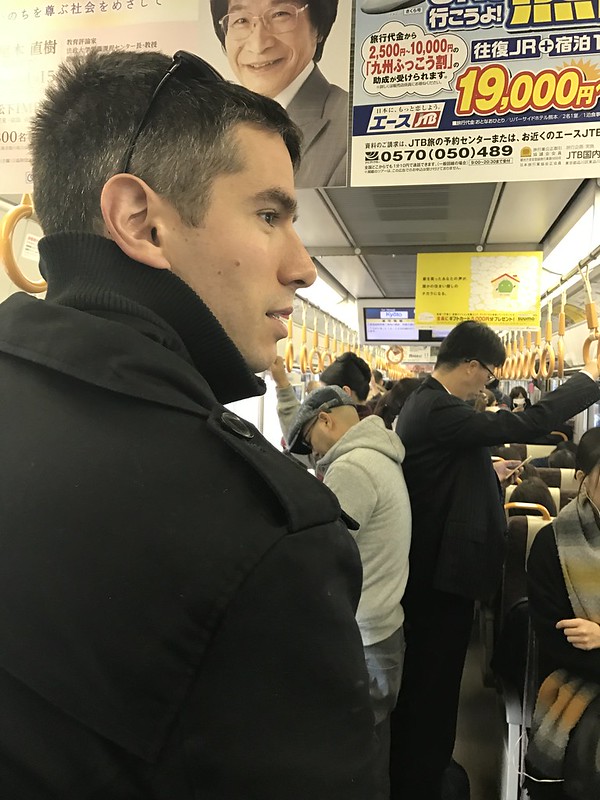 Once we arrived we realised we hadn’t had breakfast yet so we took the opportunity to pick up a couple of bento boxes from one of the stalls, along with Butter Chicken flavoured chips (like Pringles). Thankfully they have the fake food images to select from, so we both grabbed one that looked like it might have been a chicken schnitzel. Mario also picked up some drinks from the vending machine on the platform. 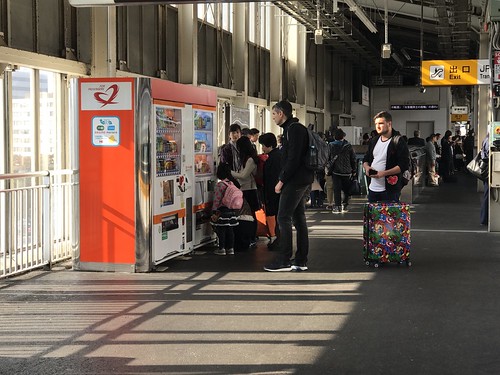 On the train we unwrapped our bento boxes are were very impressed. It was all neatly laid out, containing what was actually pork cutlets (still not seafood so I was happy, and it was quite yum), a massive portion of rice with something that looked like a brain on top (I didn’t eat it, Mario said it was quite salty), picked cabbage and ginger. It was incredibly tasty and quite filling, so a massive thumbs up from me. The butter chicken chips were quite interesting, not something I think I would repeat but still glad we tried. 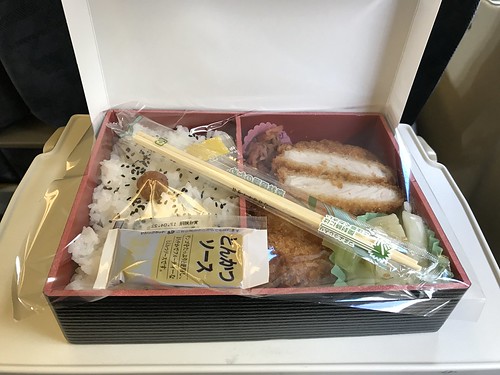 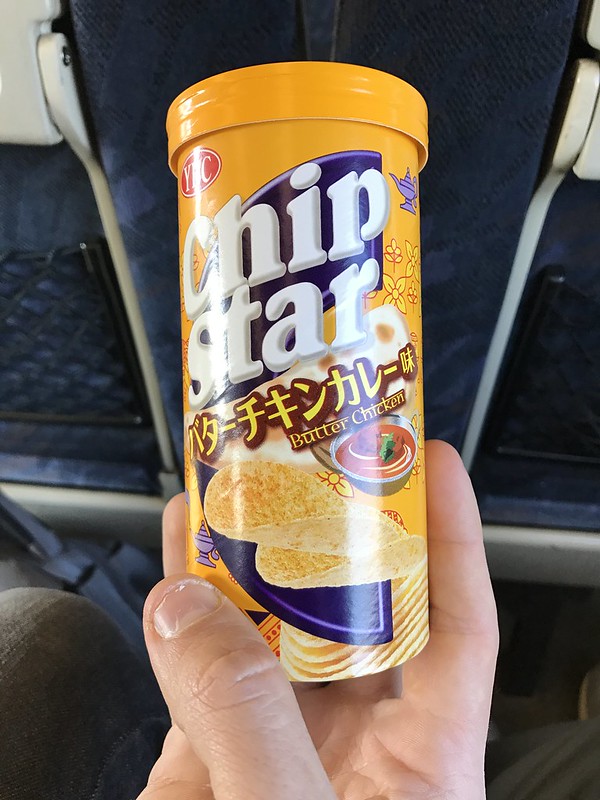 The train itself was an older model train, but still very comfortable and with tons of leg room. I took a few snaps as we travelled along, but most of the time was spent writing a blog post. The trip itself was over quickly. 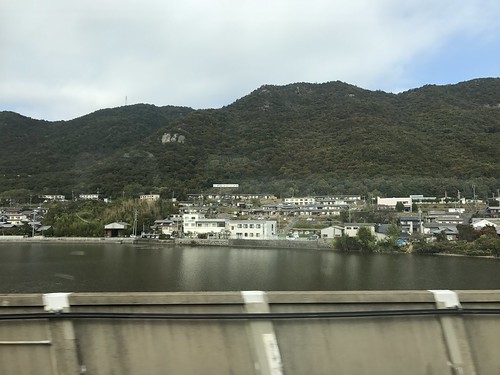 Once in Hiroshima we did the mandatory tourist thing and got lost in the station. We walked one way, got confused, walked back another way. As we headed in for a third time I saw a tourist area, and decided I would head in and grab a map of Hiroshima just so that after we had done the main things that I wanted to do that we could see what else was around. Instead, the woman there not only gave me a map but gave me the heads up on the loop bus that we could buy a ticket for and jump on and off. It worked out to be quite cheap, and perfect for us to explore the city. She also saved us a 30min walk to try and figure our way to the Atomic Bomb dome, and after having walked so much the day before I was incredibly grateful. We followed her directions to the bus, headed straight upstairs and jumped on – perfect timing!

The A-Bomb dome and the nearby peace park are incredibly beautiful, but incredibly sobering. I was grateful to see English signs so that I could read about the history, and we wandered our way around. It was beautiful to just look at all the monuments and memorials, including: 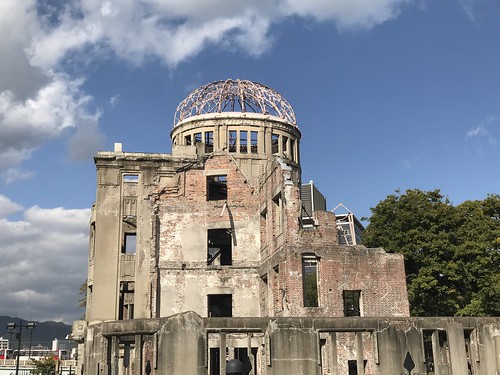 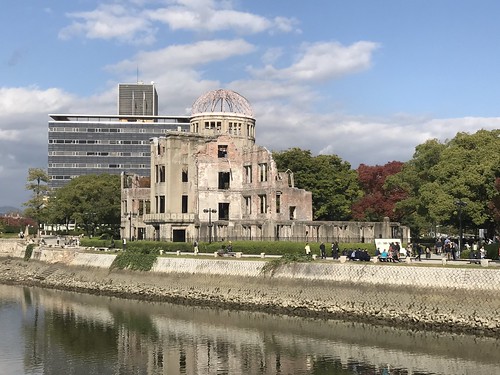 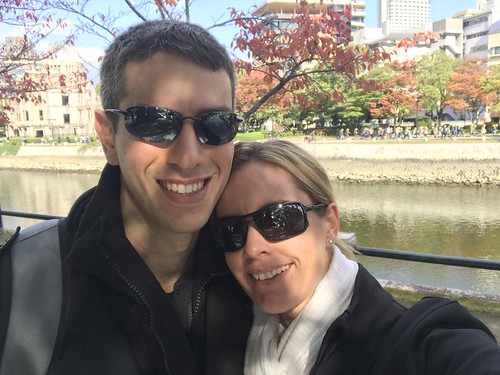 The children’s one is what really got to me. It was a beautiful statue of a girl at the top holding a swan above her head. Underneath was a bell, with a swan as the centrepiece with a rope that all the visitors could use to chime the bell. It was nice to sit back and watch all the young children enjoy playing nearby. 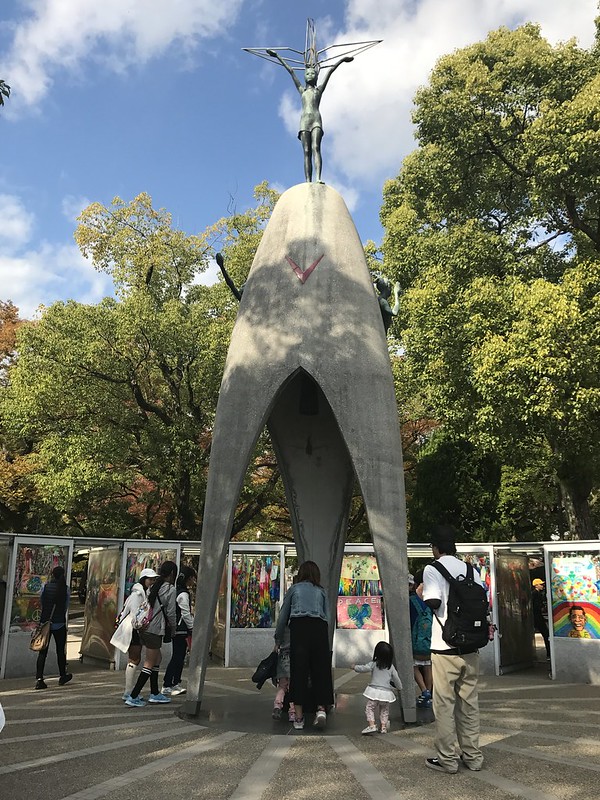 The girl in the statue was Sadako Sasuki, a young girl who had died from Leukaemia when she was 12 years old. When I was a child I had read a book about her, and the story of the 1000 paper cranes. The story told of how when she was in hospital, someone had told her that if she could fold 1000 paper cranes that she would get better, and so she began folding them. When I had read this story as a child I didn’t realise that a) it was true, and b) that her leukaemia had been caused by the radiation from the atomic bomb (she was 2 when the bomb was dropped). That realisation hit me, and later when we visited the museum they had several of the paper cranes she had made on display. 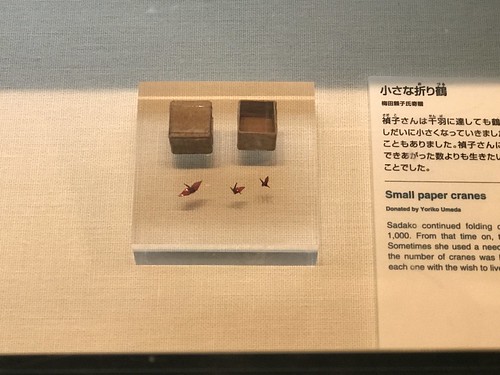 One of my previous 52s was to fold origami, and on that night my friend Bel and I had folded two paper cranes. I still have them on my bookshelf at home. Knowing the difficulty of folding the paper perfectly, and the time it must have made each one, just made her efforts seem all the more impressive, and all the more sad. I also saw several that (current) President of the USA, President Obama had made when he visited Hiroshima, as his commitment to strive towards peace. The man has skills! 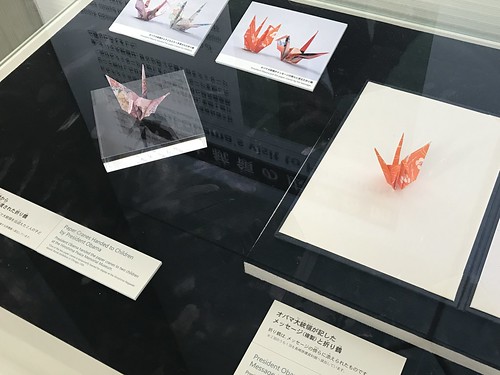 The museum next to the park had a lot of items on display from when the bomb hit. This included iron doors blown inwards, pillars showing damage, clothing worn by numerous adults and children, and walls still bearing the marks of black rain, the radioactive water that had showered down from the clouds following the bomb. There were stairs on display, still marked with the shadow of a man that had been sitting on them when the bomb had hit (he vanished), and even the preserved tongue of a victim still bearing the purple spots that appeared from internal bleeding shortly before the victims passed away. It was a very surreal and upsetting scene in there, and I echo their hopes and desires that a nuclear bomb is never dropped on again. 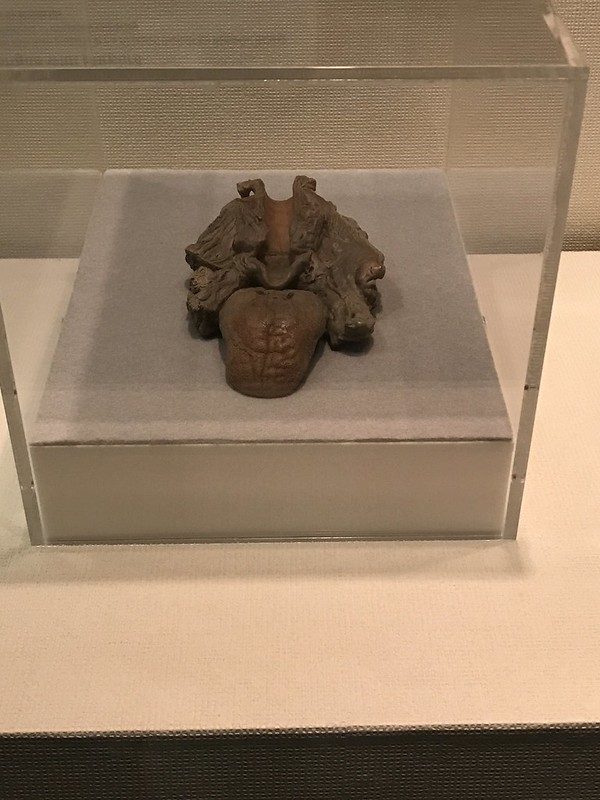 Back outside in the park, once we had our bearings we raced out of there as quickly as we could. In the park were hundreds of school children, all tasked with the challenge of asking foreigners where they were from. It was aimed at giving them a chance to practise their English, and while it was cute the first 5 times, the next 10 after that started to wear a bit. We had found there was a castle nearby, so we headed over to explore there. 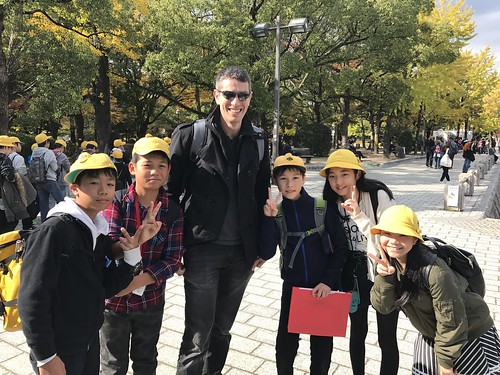 The grounds of Hiroshima Castle were nice, and I was thrilled to see they had a Eucalyptus tree growing outside. I made Mario take a picture of me, then chose to embarrass him by singing “I still call Australia home” aloud – totally worth it 🙂 We were only able to walk around outside though, and after about 20mins we were done. We decided to head home, so we consulted the map. We figured we would jump on the loop bus and finish the loop around the city before jumping on the next Shinkansen home. 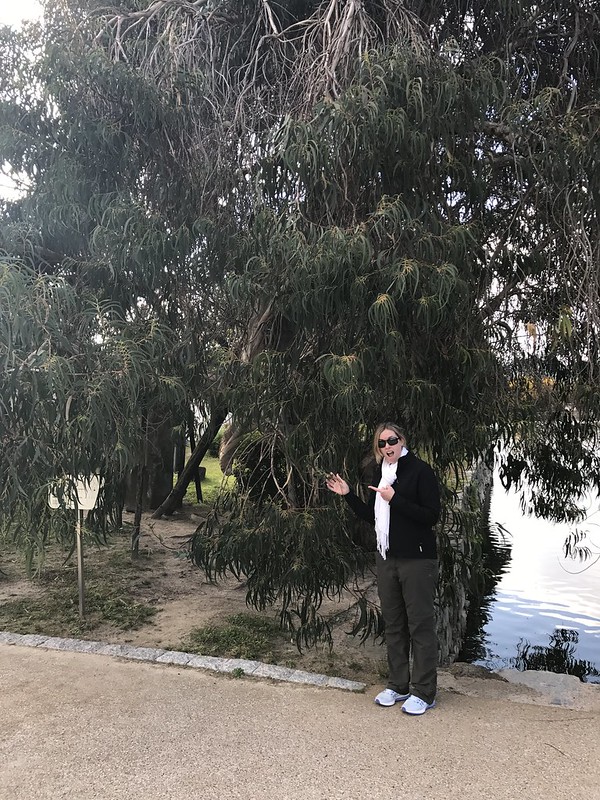 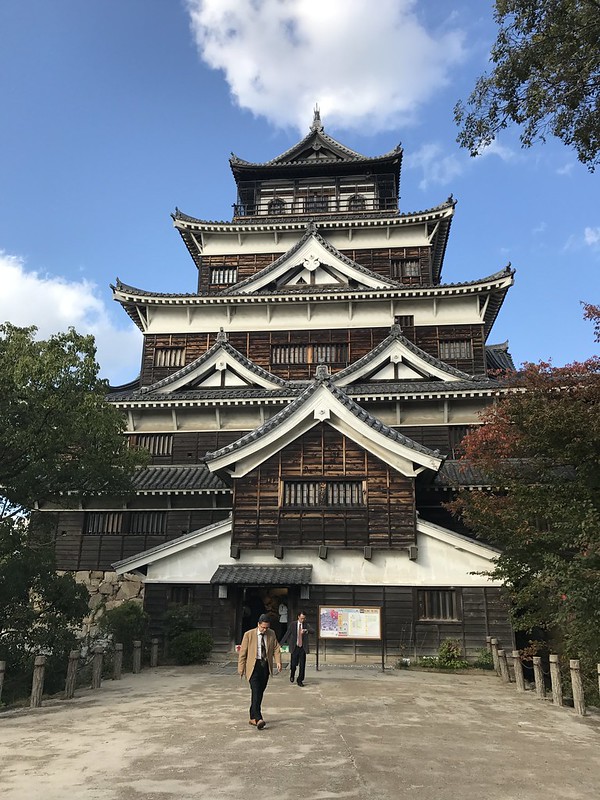 I completely blame it on being tired, because we walked in the wrong direction for about 1km – rookies! I still have no idea how it happened, and the worst part was that Mario had just reflected that we were doing so well using a map instead of GPS, so he clearly jinxed us! We found the next station instead and headed there, and arrived with about 5mins to spare. We waited…and waited….and nothing. 15mins after the dedicated arrival we gave up, and seeing it was only another 1.5km to the train station decided to walk again. I joked we would see the bus, and sure enough 5mins down the street it drove past us! I reasoned that we had been eating a lot of bad food so the walking was doing us good. It also gave me the opportunity to take some photos of the streets of Hiroshima. 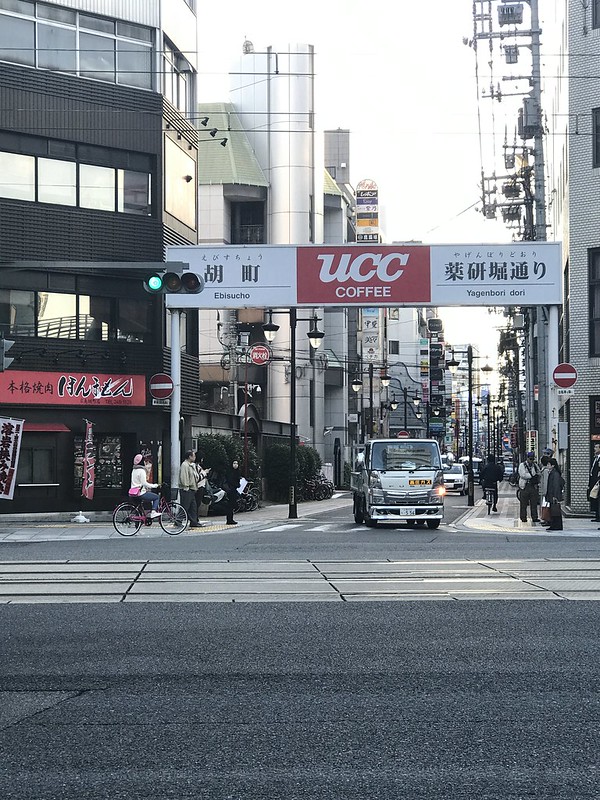 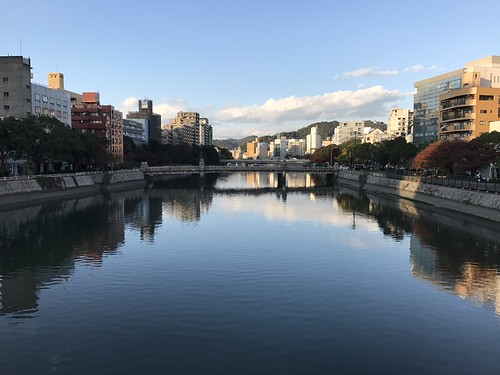 Back at the train station we grabbed some sandwiches to eat and tried to reserve our tickets. Unfortunately it had sold out, so we would have to hope we could get some seats in the unreserved section (spoiler alert – there were tons spare so we did easily). I had seen a green Fanta so picked that up to try, and Mario picked up a salami and cheese snack he had seen and was determined to try. The Fanta was terrible and super sweet, and the salami and cheese were like rubber. 🙂 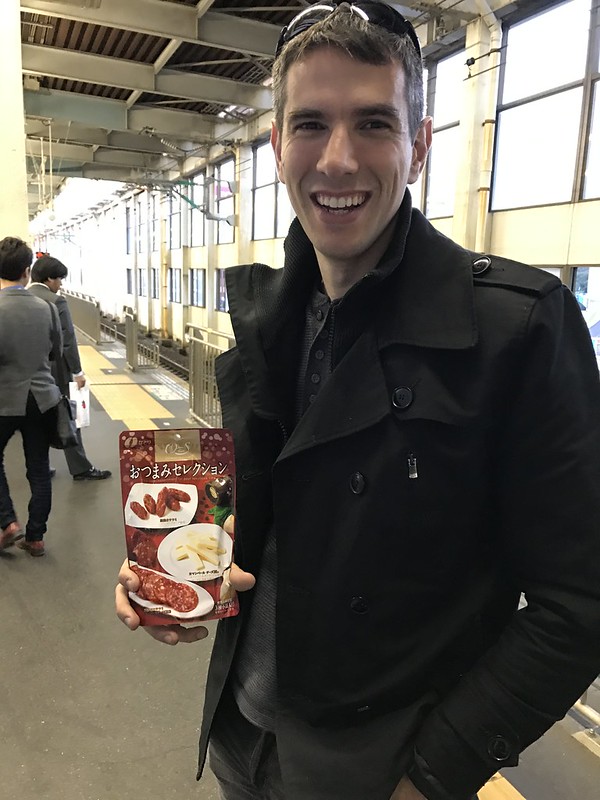 After the trip home (just shy of 2 hours) we arrived back into Kyoto and found we were still hungry. I decided to try an Aunty May’s place selling pretzels (added a hot dog pastry for myself and the onion &a chives pretzel to share with Mario) while he went for more Octopus balls. We took our treats home, and ate them in front of the telly while watching Japan v Oman World Cup qualifier. I love that soccer/football truly is the world game.

For the second night in a row, I passed out quickly in bed exhausted. Bucket list item completed – I had always wanted to see Hiroshima. The following day would be our last in Kyoto, and we had some Wishlist items still yet to achieve.