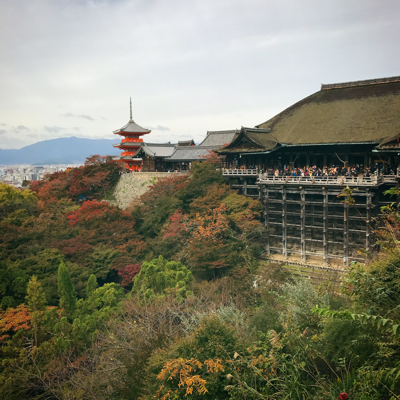 It was our first full day in Kyoto, and boy did we smash it. I hadn’t anticipated to do so much walking, but by the end of the day we had covered over 22km, and 31,000 steps. We were tired, exhausted, and our legs felt like they were going to drop off.

But we got to see a lot of great things, and that’s the point of travelling right?

We started off the day by walking the backstreets following my Apple Watch as it tried to lead us to the food markets we had researched. For future reference, the GPS quality in the back streets is not so great, so it did result in a couple of missed turns on our part while it was working out where we were. Running the GPS on the phone through to the watch also massively eats at the battery life, and so by just after lunch I was running at 50%. I opted to just go straight from the phone then and put my watch on aeroplane mode.

We arrived at the food markets, but it appeared we were a bit early as everyone was still setting up. We had thought 8.30-9 was late enough (we’d been told everything opens late in Japan) but it seemed we needed to wait longer. We’re used to arriving at markets at 6.30am and struggling to find a carpark, so this whole “late morning” is definitely not something we are used to!

To pass the time we headed back to the chocolate cafe that Mario had spotted earlier. It was a freezing cold day (I was wearing the gloves and beanie that we’d purchased the day before) and so a hot chocolate sounded divine. We hadn’t had breakfast yet either, and so when I spied what looked like a cheese toastie I figured that would suffice. Instead, it turned out to be a custard sandwich! What the heck?? So that combined with my extremely decadent hot chocolate meant for a super high fructose breakfast. I knew that my friend Mari, of 4 passengers fame, would have loved the cafe so I took some pictures of the sundae samples in the window and sent them back home to her. 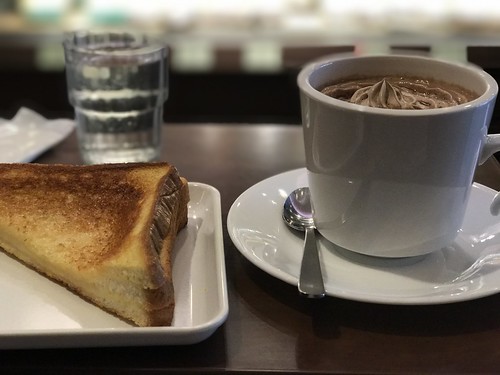 We made our way back to the markets at 9.30 only to find that half of the places still hadn’t opened the doors. I didn’t want Mario to travel all that way and then only experience half of the shops, so we made the decision to go and visit a nearby temple and then come back later. Once more we headed off into the back streets.

It feels like 2km in Japan is so much further than back home. We walked and walked, and eventually started to head up hill. We were surrounded by the locals just heading around town, and just as I started to wonder if we were going in the right direction, we suddenly came across a large amount of tourist buses parked off the road. Then BAM, people everywhere. The street was suddenly crowded with school children and tourists alike. It was chaos! 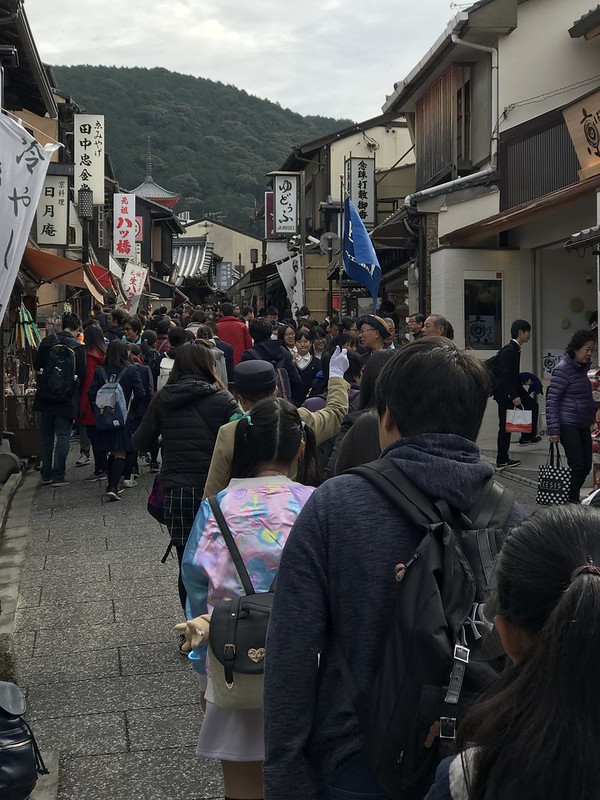 We joined the surge of people continuing up the street, lined with dozens of tourist shops selling everything from kimonos to kettles, and thousands of different types of sweets. We ignored all of it and kept heading for the temple. Once we hit the steps we took some photos and continued our way in. Entry passes in hand, we kept following the sea of people walking around the grounds and taking photos. 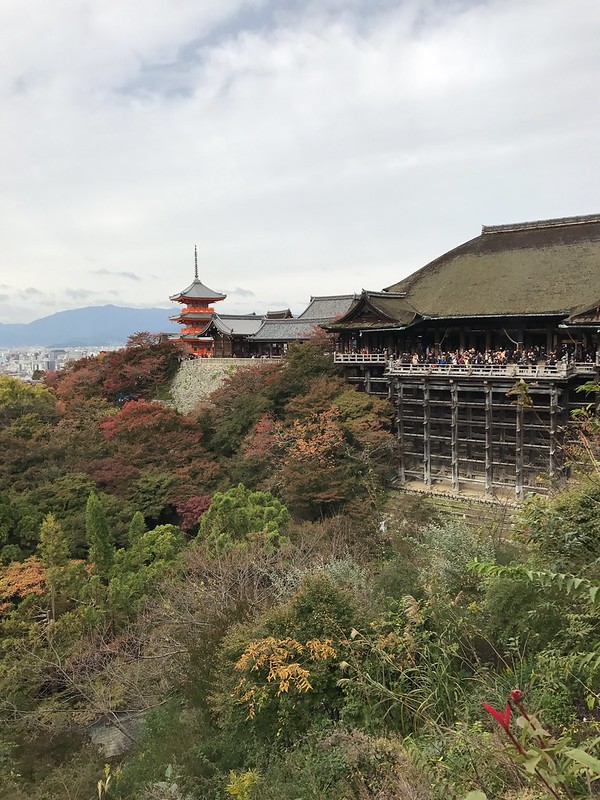 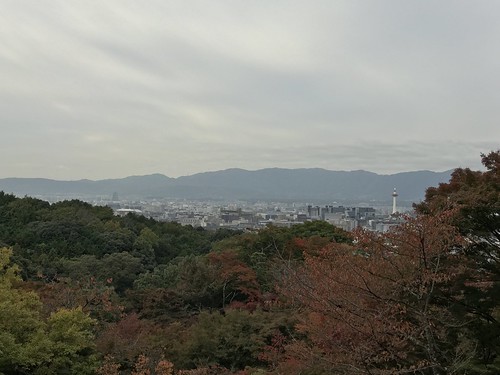 My only complaint, and it’s a relatively selfish one, is that once we started to wander around the temple there weren’t enough signs in English. I know I know, it’s a foreign country where English is not the main language so it’s a bit rude to expect some special treatment. My desire just comes from the place where I love to read the signs and really grasp the history about the location I’m visiting. Instead I was left to commit as much as I could to memory so that I could google it later. There were a couple of signs towards the bottom telling a story about a woman there, and one that I found quite funny pointing us to the “Easy Childbirth Pagoda”. I made quite a few jokes abut children to Mario. Then suddenly nature called.

From my experiences in Malaysia, I had subconsciously created a rule to not go to the toilets at temples. I’m spoiled; I like my creature comforts and I can’t say squat toilets are one of my favourite things. So when I saw this sign I cringed, because I knew there was no chance it was advertising any sled rides in the area. 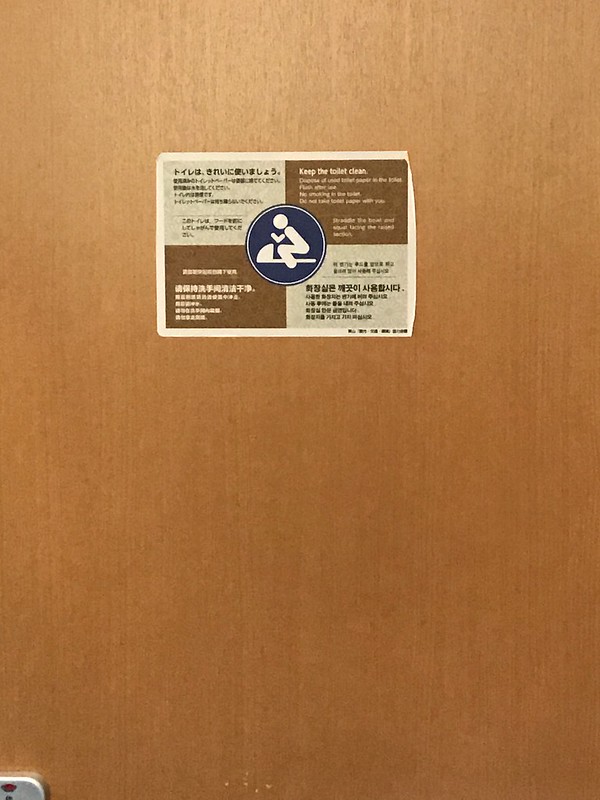 It turned out to be one of the best squat toilets I’ve ever used. There was toilet paper (not a bucket and cup), and a handle to hold onto when you are crouched down. From one time in Thailand, I was always paranoid I was going to fall in. This squat toilet actually felt comfortable to use, almost luxurious! Before using it, I made sure to snap a photo so that if anything happened, I had a great “before” photo I could use to share, but unfortunately for everyone back home I came out relatively unscathed. 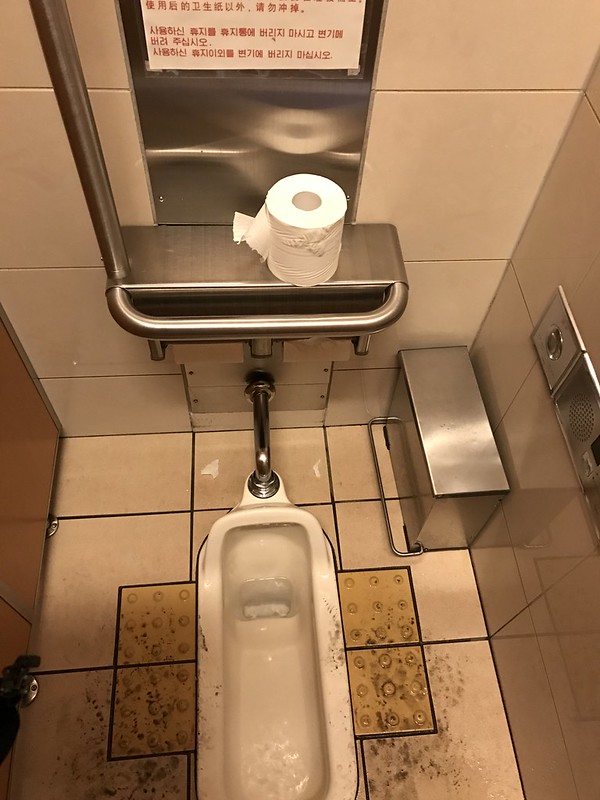 We finished looking around and headed back down to the markets for Mario. This time everything was in full swing. Before travelling over to Japan we had watched some documentaries, and Mario had zoned in on a knife store that he hoped to visit and buy his own. They even engraved the buyer’s name into them. So when we happened to find the store, it was like a kid in a candy shop. I stood back and watched as he paced the room, hands behind his back, the look of complete awe on his face. Together with the female assistant he made a selection, paid for it, and had his name engraved. You can see from the look on his face that his dream had come true, and no matter what we did in Japan would top this moment.

Then he found the octopus balls. 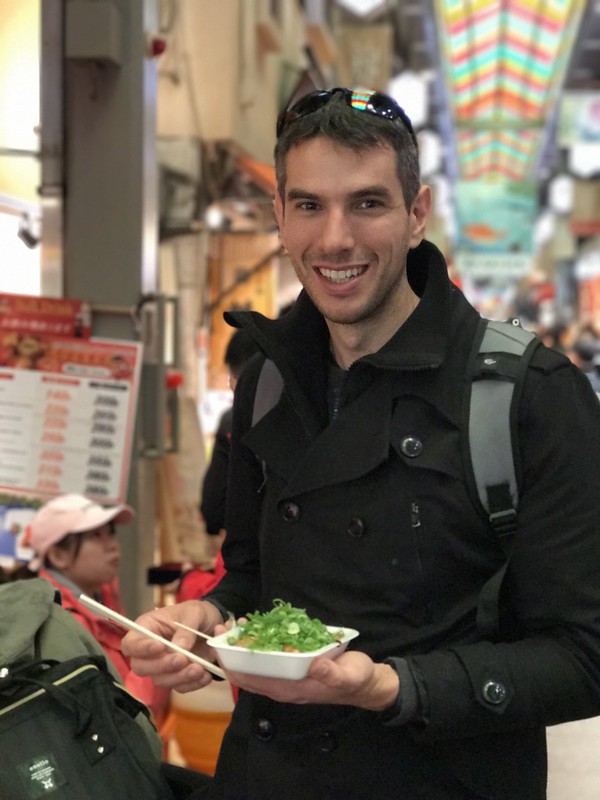 He joined the queue of people, made his selection from the machine, and took delivery of eight octopus balls topped with cheese and spring onions. I tried to bite into one, but we failed to coordinate Mario controlling the chopsticks and me trying to bite, and the ball just hung mid air (not a sentence I ever thought I would say). I ended up spitting it out in my very classy way. I’m still very determined to try them, but next time I will be controlling the chopsticks 🙂

After we finished at the markets we caught a bus to Ginkakuji, where we would follow the recommendations of a half day in Kyoto. We found the top of the Philosopher’s Walk, and started to head down. The walk follows a creek running down the mountain, and is lined by beautiful trees and foliage. In the spring the Cherry Blossoms are meant to be quite beautiful, but as we were visiting in their autumn season everything was in the process of turning from green to red. It was still beautiful to see, and very peaceful. I did find the path a bit uncomfortable to walk on so for a large part of it walked on the road beside the path. 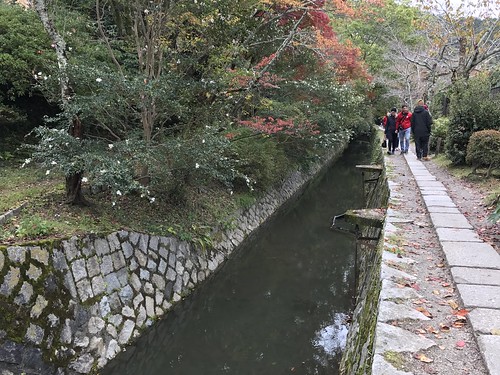 We arrived at Nanzenji and had a quick look around. We took the opportunity to light some incense sticks together out front, which was fun. The shrine also had a beautiful roman aqueduct that we had a look at, and although there was a trail we could follow to the Keage Incline, Mario preferred that we head back to the main road and go from there. My navigation skills kicked in again, and I lead us the wrong way up the hill, which meant that we accidentally stumbled upon a very cool memorial on the side of the road. It was a model of a railway system, where they would load a boat onto the trailer from the canal, push it up the hill, and load the boat into the next water system higher up the mountain. The effort that must have taken would have been unreal!

Finally back on track we walked down hill to the Heian Shrine to find ourselves in the middle of a Ferrari car show. We perved on the cars, and I remarked to myself about a couple of females that obviously owned two of the cars, and had casually thrown their hand bags on the front seats, or stuffed the boot full of gear. Oh to have that sort of money and not care about damaging your Ferrari! 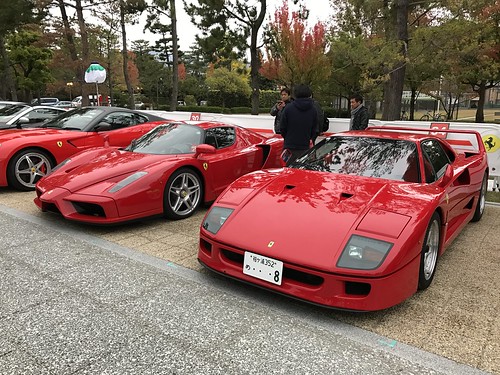 The shrine was nice; it had a great big front area that we imaged to be some sort of samurai training area. The gardens were meant to be beautiful, but due to the current season and that we would have to pay to go in we opted to just keep going. We reasoned that there is only so much greenery we could handle, and had it been all of the flowers in full bloom it would have been incredibly colourful and worth it. Instead we continued on to our final destination, and the one I was most excited about: Gion. 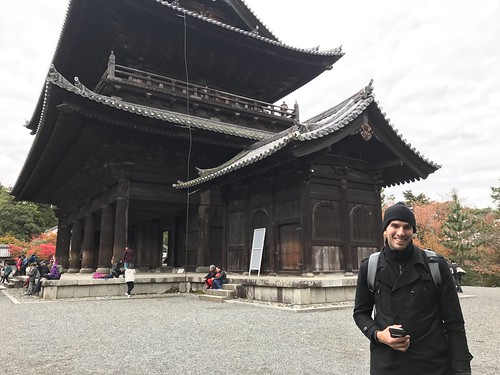 This was the traditional area with the wooden buildings, and if you were lucky you would spot a Geisha. I had read that tourists had become quite unbearable and harassing the geishas for photos, so when we did actually witness one (she stood near us at the lights waiting to cross the road) I chose not to take a picture.

We explored the streets and had planned to stay for dinner (it was dark by this point), but fatigue had well and truly set in. At this point all I wanted was to sit downl I still felt I had been able to appreciate the beauty and history of the place so when nothing appealed to us for food we decided to just head home. I tried to search for the buses to get us home, but we got confused and ended up walking home since it was “only” another 2.5km. 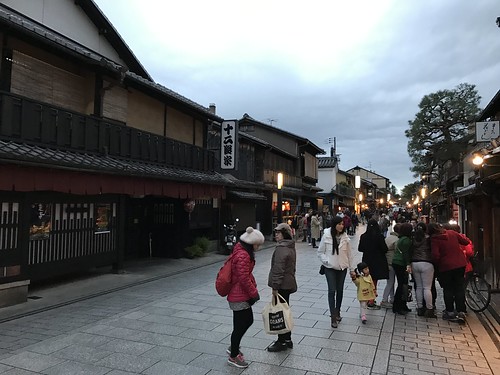 It was the longest 2.5km of my life, and I’ve done a triathlon with ten blisters on each foot. This hurt more.

I have never been more grateful to arrive back to our hotel. We dumped the backpack which by this point felt like the weight had increased tenfold (thanks to Mario doing the majority of carrying it for the day), and headed off in search of food. We returned to the nearby dining hall of the shopping centre, but since I’d had ramen for lunch and we couldn’t see anything else appealing I requested we head to the Italian place. It was the worst pizza I’ve ever eaten, but it hit the spot.

We picked up some more random bits and pieces and headed back to the hotel, and after making a packet hot drink and trying some random sweets, passed out on the couch for the deepest sleep I’ve had in a long time. We had been on the go from 8am, sitting down for no longer than 20mins for lunch. I knew the following day we would have to take it much, much easier. 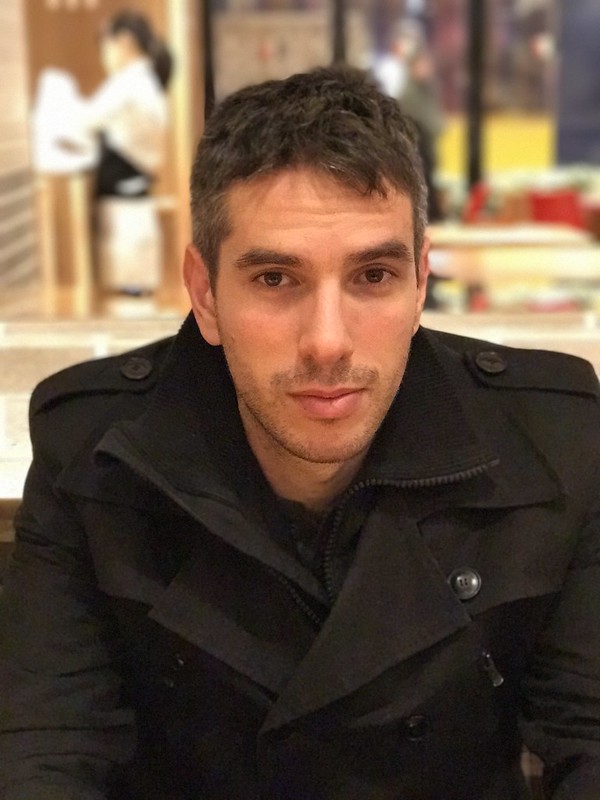 **This post was written while wasting 2 hours traveling to Hiroshima on another Shinkansen, hence links to locations etc is a little difficult**

1 thought on “Sofies on tour: Kyoto”