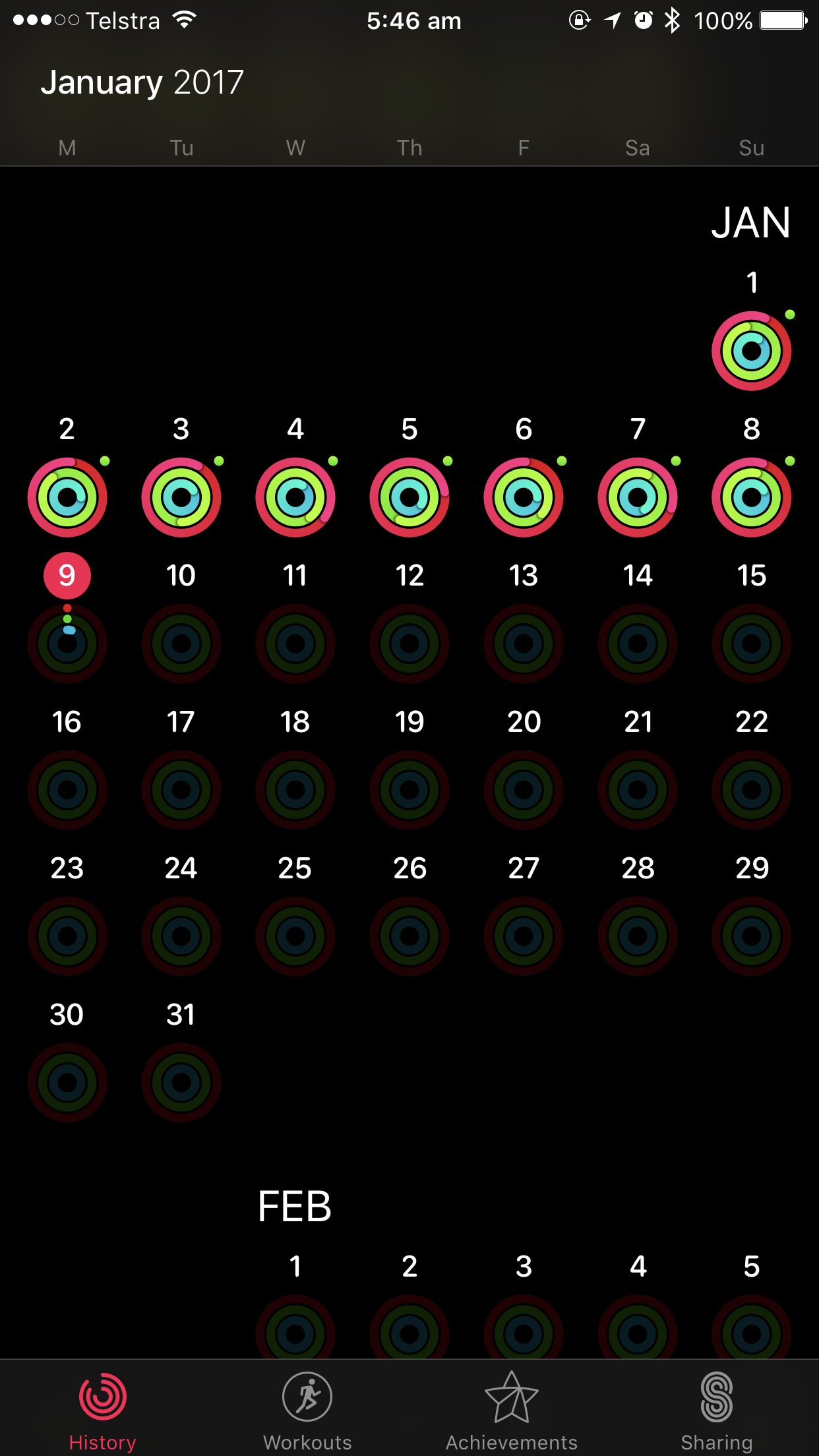 Coming off the back of the Christmas period, I knew I needed to stop being such a sloth. I had put on a few kilos and it was time to shift it.

I didn’t expect to have such a great start to the year, but the motivation was high. Suddenly, I became a bit obsessed with filling the rings on my watch. It also helped that Apple announced a special badge you could earn, “Ring in the New Year” – earned by closing all three rings for a full week in January. I’m obsessed with stats and achievements, and that gave me the extra kick I needed. Even though all I could do with the badge was look at it in an app (or send it to others to gloat) I wanted it. 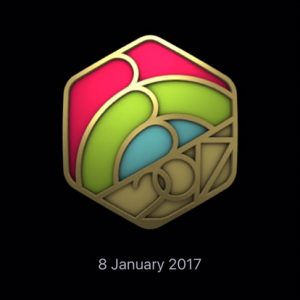 I’ve explained below on how these rings work. In the past I had religiously worn my Garmin 920xt every day to keep myself accountable. I figured now would be a great time to compare the standard fitness tracking of my garmin vs the apple watch. I don’t know enough about fitbits or the other garmin fitness trackers, so I haven’t included them here.

How do the Apple rings work?

In the post below you’ll see there are three colours: 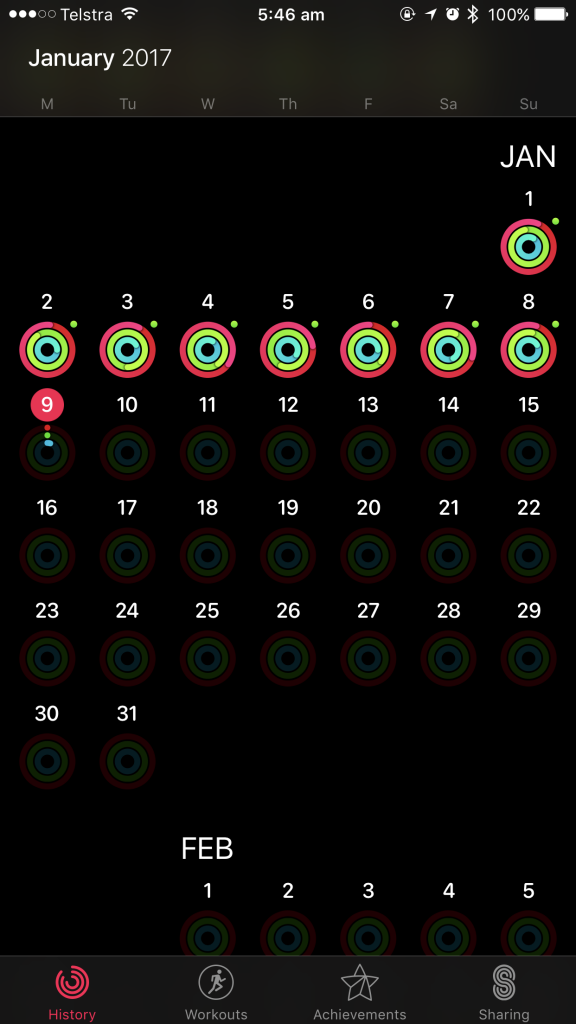 This is essentially your daily goal for calories (or kilojoules depending on your settings) that you need to burn during the day. You can increase it/decrease it based on how you fared the previous week. The higher it is the harder it is to reach the goal, and so on. You can earn calories through doing exercise, and general movement during the day. They’re active calories, so sitting on your butt all day isn’t going to cut it.

When I first got my watch, I was stunned by how hard it was for me to achieve this. With my garmin, it was based on steps. It was easy – go for a morning run or walk, and I would have hit the 10,000 steps by lunch time/mid afternoon. With the apple watch, it’s great to go for a run, but if I didn’t move around the office during the day I wasn’t hitting it. The move goal has certainly been much more effective than a steps counter.

Apple requires 30mins of exercise a day to achieve this goal. There are stories online of how people can cheat to hit the goal, but that defeats the point. Days like today, where I’ve woken up feeling super groggy, exercise is the last thing I want to do. Having a daily exercise goal reminds me that exercise doesn’t have to be all high intensity. Using the apple workout app, I can do a good 30min low intensity yoga session and hit the goal. It’s perfect for rest days in that sense – a rest day isn’t just sitting on your ass. You don’t have to use the apple app for this one – strava and other running apps all contribute to it as well. If I had my garmin, yoga doesn’t count for steps, and thus it wouldn’t have helped me with my daily goal. Neither would cycling, and I can’t tell you how frustrating it was to go for an hour ride, only to then have to do steps to hit a goal when I was already fatigued.

The only one that you can’t cheat on, and the only one that has cost me in the past from hitting my  daily rings. Once an hour you have to get up and move around, which will count as 1 out of 12 for the day. Do it for 12 hours and you will hit the daily goal. Wait until 7pm at night to realise you’ve only hit 6/12, and your day is gooone. I had a stand reminder in my garmin before, but I never had a statistic I had to hit each day. The standing goal been super effective in my getting up and moving around in the office. I’ve taken calls on my headset and walked around just to hit this one. People say you can “cheat” by standing up and swinging your arms around until it counts. Honestly, I don’t think that’s cheating. The point is to stand up off your desk chair and move, right? Standing up and swinging your arms around is definitely giving you the movement to shake off sitting in a desk chair for 8 hours straight. I’m all for that cheating, although I will still typically go get water or a coffee to hit my goal.

All up, apple runs “rings” (I’ll keep my day job) around the Garmin. The garmin is all based on steps, with zero accountability for general daily movement. It was easy enough to hit my goal, and still be sitting down way too much.

The issues that I have with my hips right now stem from sitting at the desk too much during the day. With my apple watch, I’ve got the motivation I need to get up during the day. I’ve got the reminders to keep moving and be healthier all day. On the days I don’t want to run, I have something encouraging me to still do 30mins of something.

Hence when it comes to my choice in watch for a general daily fitness tracker, the Garmin doesn’t even compare to Apple.

Props to Apple for yet again thinking outside of the box and redesigning a system for a daily fitness tracker.

Oh no – I’ve just discovered there’s a badge for hitting all three goals every day for a month. Better go and do that yoga today – I want the sticker!