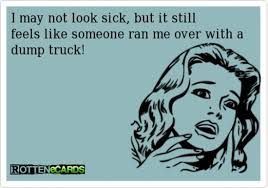 What a frustrating, frustrating week. Despite my best efforts and strong willpower, I started to feel worse and worse. My weight didn't move, and overall I just felt very heartbroken and let down.

I had started on this diet with the hopes of coming out of it feeling better, and unfortunately it didn't seem like that was going to be the case. I didn't know if I was originally feeling bad because of a poor diet or food sensitivity, but I was sure that going on this diet would answer that question.

I had a great diet over 4 weeks, and I hadn't yet reintroduced some foods. I didn't know why I still felt so fatigued all the time, had the runs, and generally like I'd been hit by a truck.

In the end because I was so frustrated, when it came time to reintroduce foods I said “screw it” and didn't bother waiting to introduce anything slowly. The first day off the diet I had eggs for breakfast, with some bacon and sour dough toast (new things being the egg & the sour dough). It was divine. As the day wore on I didn't feel any worse for it. The previous week we had both been craving a curry, so again I said “screw it” and got us some from curry bowl. It was amazing, although I went to bed with a stomach feeling heavier than any other time that year.

I'm now writing this a week later, haven't returned to a normal diet, and the question about my health has been partially answered. During the week after I finished the diet I went and had some tests done: blood, urine and stool. It showed the rotavirus, which explained the relapse around the 3 week mark where I thought it was a relapse but it was actually the setting in of the gastro. In addition to that, it also turned out that my white blood cell count was slightly down. I'm going back for another blood test in about 6 weeks to make sure there number hasn't continued on a downwards slide – the doctor suspects it's just low from the rotavirus since it's only just on the low side. We've also thrown in a few more tests for any other viruses.

Other than that, my health seemed great. So what was causing me to feel so flat?

My doctor explained that by all definitions I have “Chronic Fatigue“, although he really doesn't like that term. He feels it's a bit of a cop out, and saying “you're tired but we don't know why”. So for the moment, he's asked me to really focus on my lifestyle until the next round of tests are over. Basically that means a healthy diet, exercise, no stress and rest when I can. Mario has interpreted this to mean that I'm not allowed to do any housework, which I don't agree with. While it probably sounds like not doing any housework is every woman's dream, I don't like feeling useless. So in other words, I'm ignoring Mario and still doing housework.

Returning to the point of this post, even though I didn't get out of the Autoimmune Protocol what I wanted, I did find it provided me with other benefits:

For those that are thinking about trying it for their own reasons, here would be my tips:

Kelsbell's tips for the Autoimmune Protocol:

If you aren't prepared with your food each day, it's going to be very difficult for you. Eating out is near impossible, and unless you have somewhere nearby that is going to make you a salad or steak for lunch, trying to buy lunch anywhere is also going to be difficult.

Think ahead of what you want to eat, and if possible, cook a lot for dinner and prepare portion sizes. Freeze them or put them in the fridge, then reheat the following day for lunch.

Be prepared to be anti-social

I had to turn down quite a few social engagements during the month. My friend had a birthday celebration, but when I realised that I couldn't eat anything off the menu at the restaurant, and afterwards when they were out for drinks I could only have soda water, I realised I wasn't going to have fun. Not wanting to be a downer on the night, I apologised to her and said it may be best to stay home.

Other events I went to were just some barbecues with friends, but Mario was kind enough to prepare my own little salads to take so that I still had something to supplement the meat on my plate.

You will need to enjoy being in the kitchen

We spent more time in the kitchen preparing my food than ever before. If it comes in a packet, forget it. If it's easy to make, forget it. The food processor became my best friend during the month. I have never chopped or baked so much before.

You will discover new recipes, but it's worth it

I am now obsessed with baked sweet potato chips. It takes 45mins in the morning, so if you're short on time this isn't going to be easy. But I've found what works for me is putting them on in the morning while I go have a shower and get ready. Pull them out of the oven, throw them in a container and off to work I go. Perfect for a snack at work, and eating chips makes it feel like it's a treat.

You will get frustrated

Pinterest is your best friend when looking for recipes

I invested in a $30 cookbook at the beginning of the month, and I think I looked at it about three times. Pinterest has so many recipes that you will cover everything you need. I found sweet treats, savoury treats, main meals, drinks and snacks. Other than stock standard meat & veg, almost everything else I ate was from a recipe on pinterest. You can find my board here where I collected a lot of recipes.

If you're planning on giving the protocol diet a go, I wish you all the best of luck. A lot of people have had a lot of success with it. For me, it turns out my health issues don't appear to be food related so I don't need to remain on so strict a diet. I'm going to return to having some of the items not allowed on the protocol, and possibly align my diet with just regular paleo (although I want to have dairy).

If you have any questions about my experiences, please feel free to ask. I'm happy to provide advice.