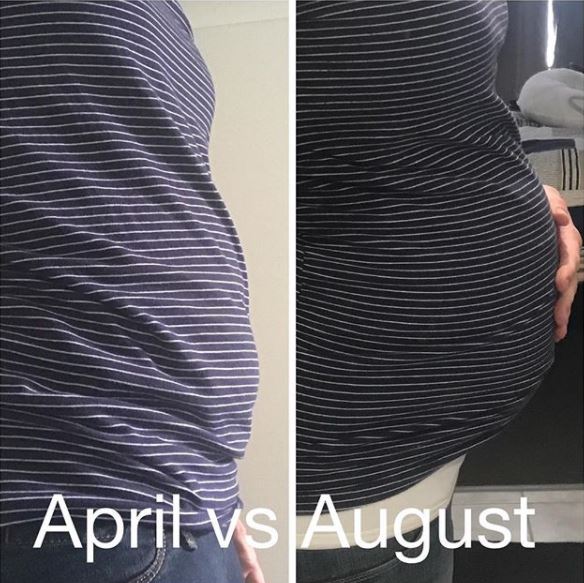 I blinked and we're on the home stretch! So much has happened with this pregnancy since my last update, so bear with me because this post is going to be long.

How bub is progressing

He's great! Even through all the sickness and viruses I've had, he's soldiered on like a champion. He's getting bigger and stronger every day. We haven't had any recent ultrasounds so I don't have any pictures to share, but if you look at the comparison of April and August you can really see just how different my belly is. To think I felt so fat back in April; I really had no idea! 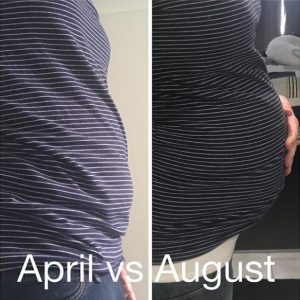 According to the baby apps on my phone he's currently the size of any of these things:

The last one really makes me laugh – it compares his size to toys. Early in the piece he was the size of a GI Joe!

It's been really nice to get used to feeling him squirm in my tummy. Rather than kicks anymore it's more like waves across my belly as he shifts position. He is still sitting super low, which sometimes when I'm climbing stairs or trying to ride my bike I feel like I'm hitting him in the head! He's a fan of snuggling into my hips, or against my bladder. As I type this I can feel the familiar pressure of him up against my right hip; it's like he knew what I was writing about! I can't wait until he gets to the point that we can see a hand or a foot, or moves enough that my friends can feel it. Mario has been able to feel him quite a lot, usually when we're laying in bed at nights relaxing.

I'm finally not sick with anything, and it's been so long since I felt good that I'm not taking anything for granted. I haven't hit the point yet where I'm getting fatigued again easily, although there have been the odd nightly naps on the couch here and there. Energy wise I feel great.

Mentally, I'm in a great place right now. The bigger my belly becomes, the less I feel self conscious about my size. In fact I've gone the other way, and I've begun to appreciate it. Let's be honest though, I'm the fattest I've ever been and I don't mean on the scales. I have back fat rolls, and my hips are huge. My butt has its own post code. But I'm OK with that. I haven't weighed myself in months, and that has contributed significantly to my ability to get passed my body image issues.

On another note, I actually have boobs now! It's weird – they touch my tummy when I slouch over! I am discovering what I've missed all these years, and I think I enjoyed not having boobs to be honest haha. I've jumped from an A cup in November (due to my weight loss, some of that came from my chest too) to a DD. That's before my milk comes in. In about 4 – 6 weeks I'm meant to start massaging them to try and encourage the colostrum production; the juice before the milk. I'll bet Mario will be willing to help with that! To date at my largest I was between a B and C, and that was when I was at my (now second) fattest time in my life.

I think the reasons behind my contentment comes down to my gratitude towards my body and everything it's doing. I've had a bit of a shit health run, but throughout that whole thing my body has continued to provide a safe haven for our child. He's developing as normal and with zero complications. If my body needs to get big and fat and reject normally "healthy" foods in order to achieve that, then so be it. My body's time to come first will come. For now, I've found that if it's on a sandwich I can eat it, so I've been able to get more salad back into my system again. Veggies are still largely a no go.

Around week 26 we had organised for ourselves to spend a long weekend in Sydney as our babymoon – the final "holiday" we get to ourselves before bub comes. As of week 27 or 28 (I forget which) you need a medical certificate to be allowed to fly, and that was something Mario wasn't keen on risking, hence the early holiday. We're also trying to save his leave for when the bub comes, so we opted for a long weekend rather than a week or two.

The weekend was amazing. We spent a day to ourselves in Manly (we found the most amazing cheese shop in doing so), and the rest of the weekend we spent with my sister, Amy and my self-declared sister in law, Claire. We got to do all the things we love – explore, try some new random foods, and spend time with loved ones. I'm sure that when bub comes we will still be able to do the same, it just won't be all day affairs; well, not without carrying a mountain of luggage in the way of spare nappies and changes of clothes!

The nursery is coming along nicely now. We've bought the "big ticket" items, being:

We've also bought the pram and car seat as well, though obviously they're not designed for the nursery!

We have been so blessed by our friends and family already, we are very spoilt! We have already been given sheets, a mobile for the cot, nappy bag, beautiful hand-crafted clothing and blankets, toys, books, countless little outfits and more. I'm so very honoured and humbled, thank you everyone!

Our baby shower is next month, at which I'm pretty much guaranteed to cry. I'm awkward with receiving gifts at the best of times; the combination of being centre of attention with a hatred for making people feel obligated to buy us stuff (that idea has never sat well with me). I'm honestly just more keen for a catch up with everyone to celebrate this incredible transformation and progression of our lives.

We ended up going with a jungle theme, mostly inspired by toys that a friend of ours gave us right at the beginning of our pregnancy (thanks Chere). We just found all the little animals so cute, so Mario went online and ordered some wall stickers for us to apply. It just grew from there, and of course, it helps that my beloved football/soccer team is Brisbane Roar, with a mascot of a lion! It's all part of training the baby early who he has to support.

Mario has even crafted an LED lighting system behind the nursing chair and change table, controlled by an app on our phones over the wifi! It's fantastic! his theory was that way we could have coloured lighting in the room, dimmed down at night, so that we can see what we're doing without it being bright enough to truly wake baby. Plus it makes for a great night light. There was an article that came out about the colour choice of night lights can ruin sleep, but this way we can control the colour ourselves, depending on the situation. It's very cool.

There's still just a few decorative pieces I want to do, and then we're going to be finished. Just a few photos/pictures up on the wall above the cot, and some bookshelves, then I think we're done!

Once everything is in, I'll have to do a proper feature on our set up.

Now we're on the home stretch we're having to start thinking logistics. I've realised it's probably a good idea to get a hospital bag ready, just so that if anything happens unexpectedly we're slightly prepared.

We were out yesterday and discussed what would happen if we did go into early labour. We do have a large amount of newborn nappies purchased during a sale at Baby Bunting, and a few 0000 singlets. Other than that, we really don't have much else figured out!  I think we'll get the car seat put in soon as well, which will feel extremely weird to see it there every day. That's definitely going to give us yet another reality check.

If anyone has any suggestions on what we need and should do to get prepared, I'd love to hear it!