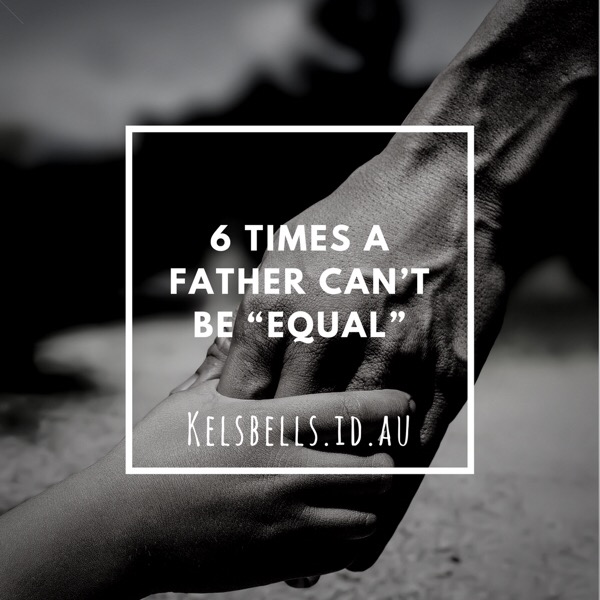 Today I read an article about a father who was threatened to have security called on him when he was using a parents room to change the nappy on his child. Thankfully, another mother in the room came to his defence and addressed the woman that was attacking him.

Understandably, this has caused a lot of outrage online. The woman who spoke up is part of one of my Facebook groups, and everyone was in agreement that she did the right thing.

I started the discussion on my own Facebook page, and it was a similar sentiment. Everyone agreed a parents room is for parents, whether that be Mum or Dad. In fact, one suggestion was that it should be renamed “Carer’s Room” so that anyone responsible for the care of a child could use the facilities. Great idea!

This got me thinking further beyond this. What other extremely uncomfortable situations could my husband potentially face in the future? What else was he missing out on because an equal opportunity or expectation wasn’t there for males? What about two gay males that are raising children together? What situations would they face?

There were a few scenarios that immediately jumped to mind based on what I’ve seen and heard. I put the same question to my husband as well. Without having had our first child yet we don’t know what else he could potentially face.

My husband is the clucky one out of the two of us, and is nearly bursting out of his skin waiting for our child to arrive. He’s not the stereotypical male. He knows more about parenting and looking after a child than I do. He’s the cook of the house. There are going to be days where he looks after our child without me. No doubt he will be presented with some of the situations mentioned above, and more. I’ve already told him that I would encourage him to address it directly with anyone who makes him feel out of place.

I think if we can continue the conversation about the role of fathers, and come up with some coping techniques, that he and a lot of other males will be extremely grateful.

For parents of children now, have you experienced any of these situations before? How did you handle it? Any tips for the future fathers (and mothers) out there?