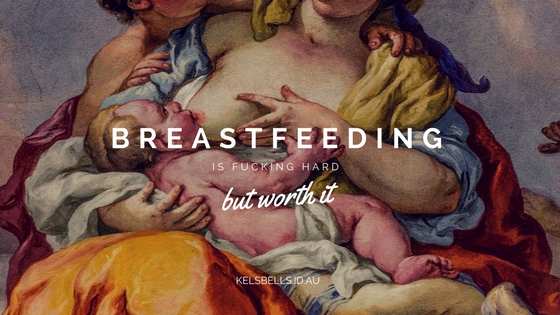 I’m three weeks into this parenting gig, and so far breastfeeding is the biggest thing that’s threatened to break me. We’ve been pretty blessed with a wonderful son:

Breastfeeding has totally caught me by surprise though. They said it was hard work, but I just never really grasped exactly how hard. As I write this I’ve just finished pumping some milk as we’re trying to build up a backup supply (for emergencies, top ups etc). I applied breastmilk to my nipples and let them air dry, then followed that with some Lansinoh cream (imagine the nipple equivalent of lip balm).

My nipples are still sore.

Now before everyone starts to throw advice at me (which is always welcome, but I just want to cover my bases first) please note:

To clarify, the reason for this post is that I wanted to share my story. At some point I will look back and remember this – the whole purpose for my blog. Hopefully I will be able to say it got a lot easier after this. People keep saying it gets easier when the nipples get used to it, so hopefully that happens soon!

Too much information can be overwhelming

The first few weeks of breastfeeding is overwhelming. Every midwife in the hospital had a different perspective of the techniques, whether we should be pumping, against pumping, whether we feed baby on a routine or demand (we’ve gone with the demand), ways to increase your supply blah blah blah. There was a lot of information thrown at us.

The challenge here is that you’re trying to incorporate everyone’s advice, while trying to feed your baby. It’s scary!

Then when you try to figure out the position of the baby there’s even more to think about:

If your baby isn’t latching properly, then it can get extremely painful. Not just during the feed but after. I’ve had moments where the feeling of the sheets rubbing against my boobs was enough to make me jump. The water pressure in the shower too!

I’ve resorted to using the following to get through:

The only way I can explain what it feels like, is to imagine you’re dragging your nipples across coarse sandpaper. Sounds awesome right?

I’ve spoken to my aunt about the nipple shields as well as read up online about them. I’m now opting to only use them if absolutely necessary. If I’m at the point where my nipples hurt too much I’m pumping instead and bottle feeding, just to see if that works better. Then if bub still needs a top up, attempt breastfeeding then. Shields are the last resort.

After all of the above, you’re then at the point where you’re wondering if all of this is actually working. There’s the stats you need to be monitoring:

On top of that, your partner doesn’t have the gift of milky boobies.

If you don’t get this right your baby is going to starve.

Of course there’s options. There’s always options. I actually ended up buying a tin of formula and stashing it in the cupboard just in case. I just wanted the peace of mind that if for some reason my supply dried up one day that our baby would be fed. I didn’t want to be that mother that let her baby starve.

No matter how much I try to tell myself we’re on the right track because the stats are in our favour, it’s still hard. I’m constantly doubting myself, and wondering if I have enough milk, do I change position, is my latch correct. If he feeds, then twenty minutes later wants another one, have I done something incorrectly? Are my boobs not working? Why isn’t my baby transparent so I can see how much he’s drinking?

So why not give it up?

I have friends that are having a bloody hard time right now with regards to their milk supply. They’re either struggling to provide enough, or didn’t have it come in at all. They’ve ended up swapping to formula to feed their bub, which in my opinion is great! There’s a new catch phrase here replacing the old “breast is best”.

There’s so much judgement around on whether people are breast feeding or formula feeding. Then if you’re breastfeeding there’s the judgement and looks when you’re out in public (that’s a post for another day). Note to all – I cover myself with a wrap, I’m not a public boob flasher.

I don’t want to make the mistake of assuming formula feeding is easy either.

I’m sure there’s a lot of challenges that come with formula feeding. If we’re out and about and the bub decides he’s hungry, I don’t have to stop to try and prepare anything – I can whip a boob out right there and then. Formula feeding (bearing in mind I’ve never done this before so I’m guessing) I understand there’s the mixing of the milk and the water, carrying bottles and other supplies around, and the constant sterilisation of equipment. That’s a lot of organisation that’s required!

Of course there are benefits too – nipples are saved, and partners can also join in with the feeding process. I know Mario appreciates the bonding time when he does the bottle feeds. That’s not enough for me to swap over though.

3 Replies to “Breastfeeding is fucking hard (but so worth it)”