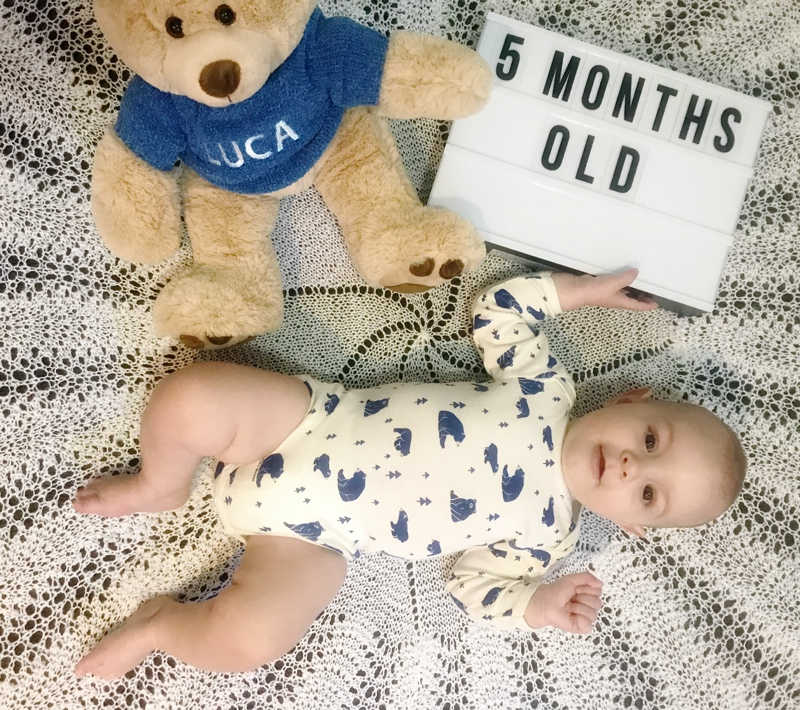 5 months. Officially over half the amount of time you were in my belly. Those 5 months felt like a long time. These 5 months feel like they’ve gone by in a flash. Let’s take a look at what happened in the past month.

It’s the first time something other than breast milk or medicine has passed your lips! And the reactions every time you ate something were hilarious. But it wasn’t exactly smooth sailing getting you started on solids.

So far you’ve had carrot, pear, apple and potato.

At first it didn’t seem like you liked carrot as you screw your nose up and pull a face. That has since progressed to you grabbing my hands and try to shove the food down your mouth as hard as you can. I guess that means you like it! The silicone feeder we’ve been using for you has been great, and way more successful than trying from a spoon. 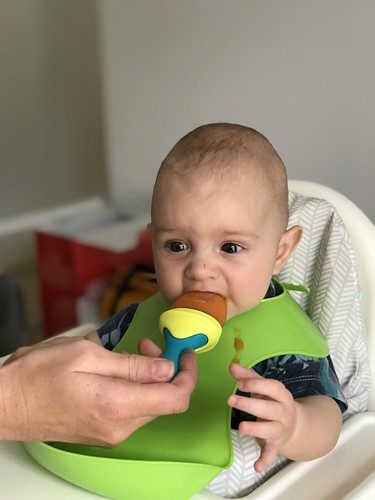 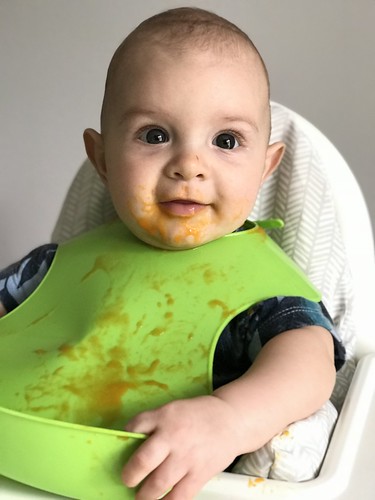 Potato you’re really not a fan of. I don’t blame you, it’s a bit starchy and boring on its own. Hopefully one day you’ll try mashed potato and like it (your dad makes an awesomely creamy one). The apple you didn’t like either, which I thought was odd, until I tried it myself. Daaaaaang it was bitter! I promise we’ll get you a nicer one next time. The pear was sweeter, and you enjoyed that more.

Next up we’re aiming for some sweet potato and pumpkin. It’s important we get you enjoying your veggies! Fingers crossed that all goes well.

Oh and by the way, do as I say and not as I do. I can’t eat zucchini at all (makes me gag) but you can bet we’ll be getting you to eat it.

Compared to your first cold at 4 months, your second cold at 5 months was a lot worse. It sort of blew out of nowhere, and we don’t know where you picked it up from.

There was a lot of mucus running down your throat. It was irritating your stomach, and so for about 3 days in a row your father and I each copped a barrage of vomit at least once daily. One time I was on the couch when I got hit; I gripped my legs together as tight as possible and waited for it to soak into my clothes before I stood up. It was the only way I could ensure it didn’t go onto the couch or the rug. It was gross. You didn’t seem phased though, cheeky monkey. 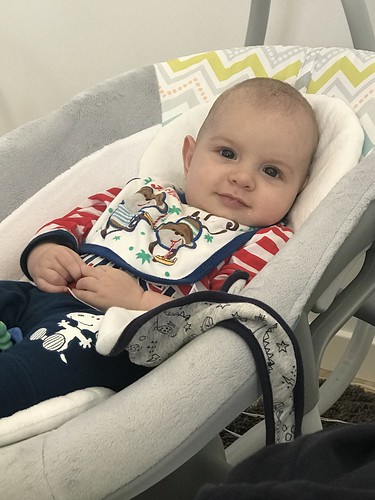 Your cough was horrible from the mucus, and a few times we got worried about whether you could breathe. We would race into the bathroom and turn the hot water in the shower on so the room would fill with steam. Then we’d stand in there with you until your breathing returned to normal and we were sure you were OK. One night your dad even slept on the floor next to your cot just so he could be sure you were OK. The vaporiser really helped too.

The good thing was that you didn’t seem too bothered by it. The only personality change we saw was that you were more quiet, and you were so tired. Suddenly you became great at falling asleep wherever you were, which was incredibly rare before then. 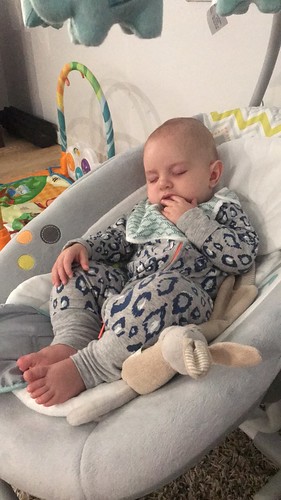 Once again the Nose Frida really helped with your mucus, and once we started using that nearly every hour we noticed a massive difference to your breathing. However you discovered how to hit our hands away, so we had to pin you down a few times. Sorry mate. Thankfully the cold only hung around for about 3 – 4 days at the most, and once you got better, you returned back to your full vocal self.

The first time it happened you were zooming around the living room in your car, stopped, and screeched. I immediately stopped what I was doing and ran over, thinking you had hurt yourself. You looked at me, gave me the biggest grin and a look of sheer joy, and let rip with another screech. You were so proud of yourself.

Time will tell whether I’m fond of this new skill, but I’m thrilled you’re progressing all the same.

Other cool things for the month:

We’re still not having the greatest of sleeps during the day. You’re pretty consistent though, as you’re ready for bed 2 hours after you wake up. But still only 30min cat naps. It’s enough time for me to have a shower though, so I’m happy!

At night you’re a bit random still. Some nights you might sleep through until about 12.30, some nights 2.30. I tried doing the dream feeds at 10pm but I’m giving up on them now. It doesn’t seem to make any difference. So I’ll just go to sleep and wait for you to tell me that you’re ready for your next feed. Eventually I know you’ll space this out when you’re ready to.

The funniest thing is that you really enjoy sleeping with your bum in the air! I vaguely recall doing this as a kid, and apparently your Aunty A does it as well! Sleeping on either your tummy or with your bum in the air does seem to have helped with your wind issues though. It’s rare that you wake up in pain in the early hours of the morning anymore. The other night I decided to eat some broccoli to see what would happen, and that night my stomach was gurgling with wind so loudly (my friend that was over at the time could hear it). Sure enough, at 3.30am the next morning you were hit with wind pain. Thus no more broccoli for me for now! 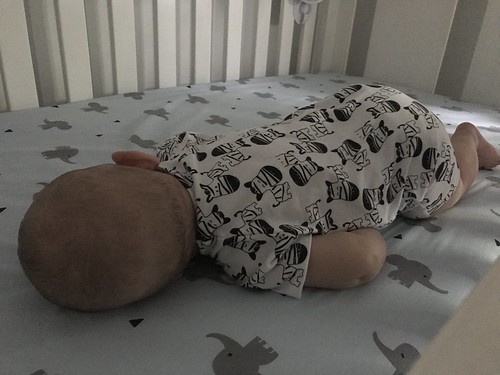 Uh…I should probably have checked that. Right now you’re asleep (the only chance I really get to do anything on the computer) so I’ll have to check that when you wake up.

Guess who is working on becoming one hot mumma! That will probably gross you out by the time you’re old enough to read this, so uh, sorry.

I’ve gotten back into training now, and for 6 weeks have joined a boot camp group. During training you’re with the other kids in the child minding area, and seem to really love it! It’s a great chance for me to work out and for you to have a new sensory experience. By the time I’ve finished training you’re tired, and we go home. You have a nap and I have a shower – win!

So far training is going great, and I’m really enjoying being back into it. My strength has completely gone though, and I’m the most unfit I’ve ever been in my entire life. But hey, all that means is that it’s time for my greatest come back ever!

As for your father, he’s doing well. He’s trying to work out when he gets a chance, but as usual has been working on more projects. Shortly we’ll be going away for our first camping trip so he’s been busy organising that (by the time I publish this we’ll have already gone, but more on that in another post). He’s also been amazing to me, doing a lot of meal prep and helping me to eat better every day (it was time for me to lose my baby weight). He’s still got a few projects on the go, and I keep telling him it’s time we get him a shed. So far he’s dragging his feet on it, probably from a combination of spending money and (my secret opinion) enjoying being inside in a comfortable spot. But otherwise he’s being his usual sensitive, caring, work-himself-to-the-bone-to-keep-everyone-happy self. 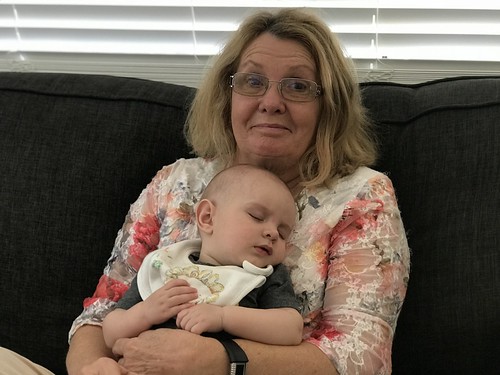 Your nana and aunts have been looking after you two days a week while I started back at work (working from home). You’ve been really good for them, and I know your nana has been enjoying the experience. She actually leaves at the end of next month for a 6 week trip overseas, and is going to miss you so much. You’ll have changed so dramatically by the time she gets home! 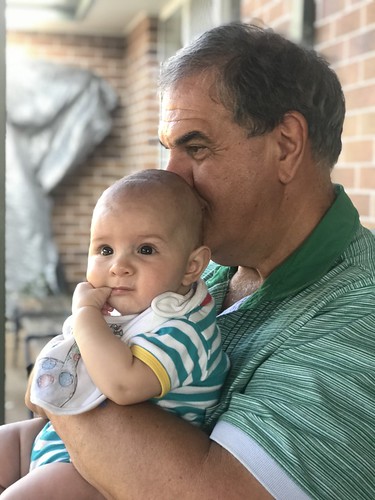 On the other side of your family, your Nonna, Biz Nonna and Nonno equally adore you. Every time you visit you’re smothered in kisses and cuddles. Nonno is secretly working on an amazing present for you that you’ll love (and I’ll be scared about), but I’m not going to spill the beans! It’s hard that we don’t live closer to them, but we are grateful for all the trips north they’ve made. The trips south are still a little tough with you, but we’ll get there!

So that’s it for another month! Next month you hit the big 6, half a year old! Wowsers!