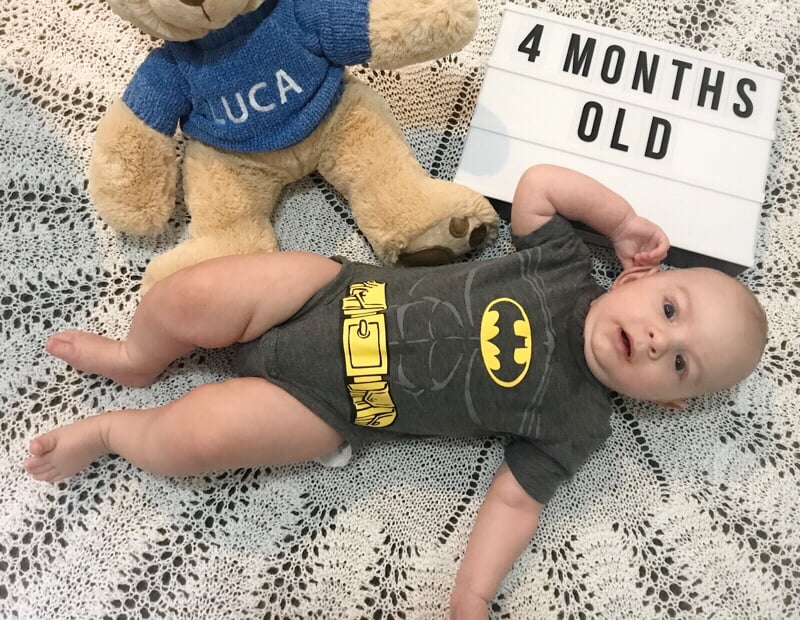 This has been a busy month this one! Not only with developments, but also just in activities. It’s been nonstop! Let’s get into it.

This month you went on your first holiday down to the Gold Coast, which I wrote about here. You were such a good boy! You slept in your port-a-cot, and almost religiously napped every 2 hours. I daresay it was because you were pretty exhausted from being out and about a lot,  although you were back at the hotel for most of your naps. 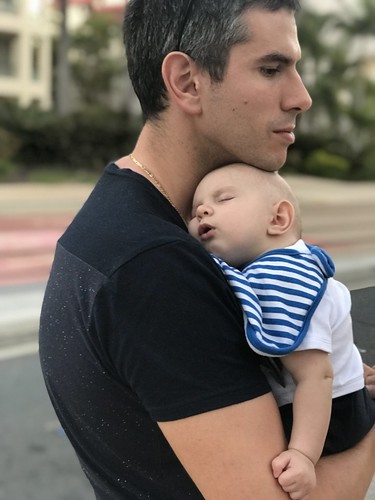 On the holiday you got to feel sand for the first time, and your expression was priceless! It was a mix of confusion and curiosity. Your toes are so long, and you were digging them into the sand, feeling the grittiness. We had to do a bit of work to get all of the sand out later!

Here’s a few pictures from your adventures at Surfer’s Paradise: 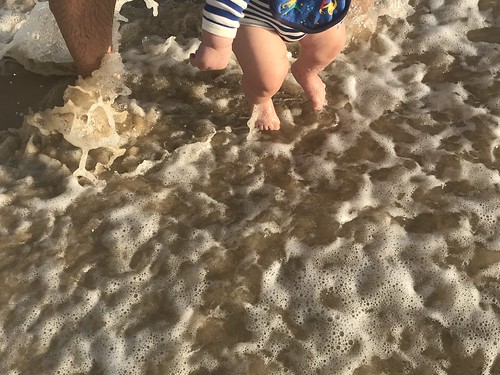 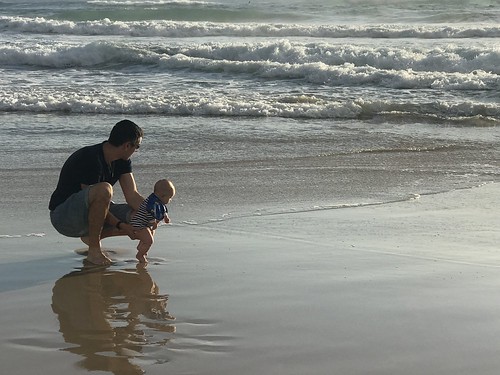 Speaking of the water, you’ve started swimming classes. You’re doing really well for the most part, the teacher has been very impressed. The one time she used you for a demonstration, you wriggled around on her! Instead she used you as an example for persistence, how if you keep trying the baby will settle down and eventually float around as intended. I think you have FOMO, a Fear of Missing Out. You were only wriggling because you want to see everything, and on the roof there were patterns of fish.

(Later in another class she used you for a demo again, and this time you were perfect.) 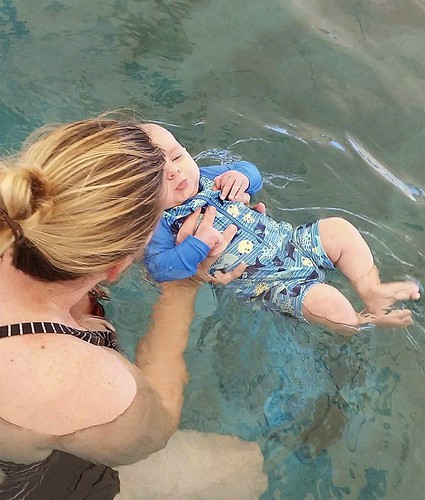 I’ve been really lucky about how chilled out you are in the water. You’re happy to float around with me, and you smile when we sing songs together. I’m hoping you develop a strong love for the water. If you’re keen, I’ve even got some wonderful kite surfing teachers that can show you a thing or two when you’re ready!

On top of the weekly classes, we’ve taken you swimming a few times by ourselves. Each time you seem to really enjoy yourself. This photo we’ll blame on dad’s timing, because neither of us look like we’re ready! 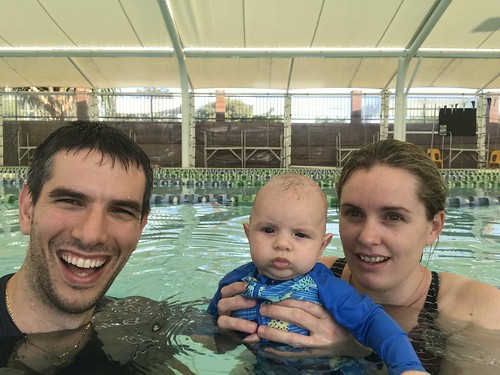 Your aunts, Amy and Claire, have finally had their pool installed and you’ve had a few swims in there so far. The first time you only lasted 10mins before you were hungry, then you passed out straight after. I’ve made a mental note of that for the days when I need to wear you out. 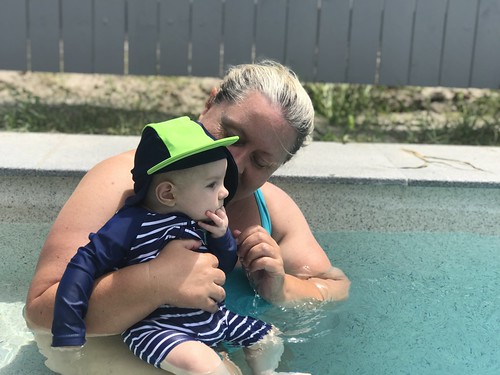 Rolling from your back to your tummy

This month you rolled from your back to your tummy! Now you’re so quick at it that you flip over a few split seconds after I lay you down on the floor on your back. It’s great, and we’re very proud of you, but geez has it made changing you that much harder. 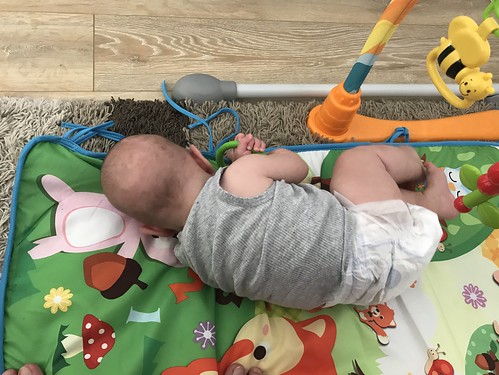 I used to have a trick so that I could easily have a shower every day. I’d put you on your play mat, and you’d happily lay there for 5 – 10mins kicking the buttons and batting at the hanging toys. You played, and I showered. Now that you’re rolling? Forget about it! Back to the drawing board.

You took the dummy!! I can’t tell you how much of a lifesaver this has been on the odd occasion.

The first time you took it you were absolutely exhausted but refused anything and everything. It’s was a first time for me too – it’s the first time (and only time so far) I actually cried out of feeling helpless! Out of desperation I offered you the dummy, you took it, a few sucks later and you’d passed out – you were so tired and just needed that comfort suck. To which I then cried again, but this time out of relief.

Since then you’ve been happy to take it on occasion. We don’t give it to you all the time, purely because you don’t need it. Mainly when you’re tired, want to suck but don’t want milk. In the past week you’ve maybe had the dummy twice? It’s pretty rare but still great that you’ll take it.

Regarding the picture below, check out the mighty scratch you’d given yourself on your forehead and just under your eye. We’ve had to be diligent with your nails because you’re great at scratching yourself! 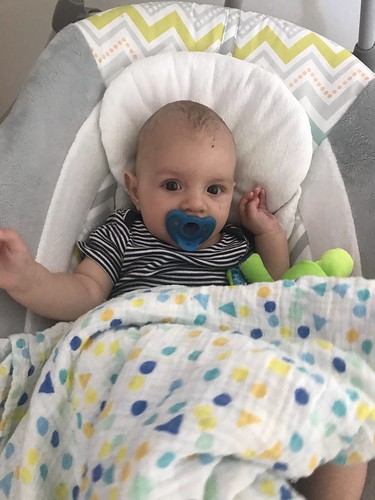 Moved to your own room

This was a sad day….well, for me at least. Now that you can roll you frequently roll over in your sleep – that’s how easy it is for you. The problem was that when you were sleeping in your bassinet you’d hit the side, wake up and cry. I don’t blame you – you were half on the side and half on the bottom, on this weird precarious diagonal angle. It wouldn’t have been comfortable!

Since we moved you to your room you’ve had more space. You’re rolling in your sleep still, but because you have the room to roll onto your tummy you get comfy and fall asleep again. You actually seem more happy in that position! And don’t worry, I’ve been checking on you so that I’m confident you can breathe when you’re on your tummy. You have a lot of strength, so if you need to lift your head, you do. But if you need me it’s just one call and I’m there. I’ll probably get in trouble for that, and I know eventually we’ll teach you to self settle, but right now I want you to know you’re safe.

For the first week you were in your cot we slept in the spare bedroom right next to yours. I wanted to know that if the baby monitor didn’t work for any reason I would hear you. I had to get used to relying on the monitor. It was just as much of a learning exercise for me as it was for you. 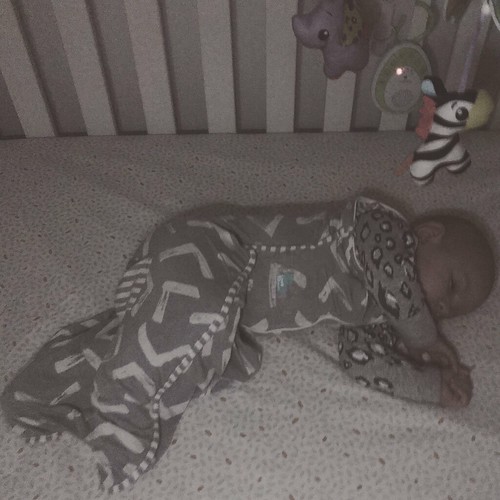 We’re comfortable with you sleeping in your cot now though. You’re still waking up several times a night for a feed, but you haven’t had any super horrific nights at all. Having you in the cot means the nursing chair is right there though, so I’m able to use it at night. It’s a lifesaver! While you’re feeding I can recline back if I need to, instead of trying to feed you in my bed. Your dad is sleeping better than ever…I’m jealous 🙂

I’m not entirely sure if you caught a cold, or if it’s a symptom of teething (you’re showing other signs of that right now too). Randomly one day you woke up and had a runny nose.

Now, when you read this you’re going to be older, and you’ll understand the gravity of this statement.

I had to suck the snot out of your nose.

For the rest of it, you were a little champion. You didn’t seem bothered in the least. You still slept well, although one night you struggled a little with breathing, but once in daddy’s arms you settled. After a few days you were over it and you were back to normal. I know it will get a lot harder than this in the future, but for now that was pretty smooth.

So remember how last month I thought I jinxed it? Yeah, I jinxed it. Whether it’s to do with the latest leap that you’re in, or the sleep regression, or just in general, there’s been some exhausting nights.

As it is, you’re still averaging about 8 hours overnight, and 30min cat naps every couple of hours during the day. You’re still up by 5am in the morning too. Definitely an early bird like your parents.

Just over a week and a half ago you were weighed in at 7.5kg, 1kg since last month. You’re growing big fast! The swim teacher has to keep reminding herself how old you are, because you’re so long and look older than you are.

There’s not too much to report in this month that isn’t already mentioned above. The trip to the Gold Coast was a huge highlight, and after speaking to your aunt and Nonna, it looks like it will be a yearly tradition now with the whole family. I’m already impatient for next year.

Your father has been busy again working on new equipment for camping. We have a new “holy crap” light that will be visible from space, called Sun 2. On top of that, he went crazy at Bunnings and the op shops buying various bits and pieces. He plans on making a sensory board for you so that you can have a lot of fun. It’s things like locks, light switches etc. I actually suggested to him that we should create little “licenses” for you. As you grow up and you’ve shown that you can use something responsibly then you’re awarded your license and can use the real thing. It’s my cheeky way of avoiding you hopefully getting into everything you shouldn’t!

I’m trying to find some time to make a quilt for you. You seem to enjoy rubbing your little hands on all different fabrics and textures, so that’s my goal for the month. I’m not really finding much time for it at the moment though. In between play time with you I’ve been focusing on making sure the house is tidy, and the odd time here and there to write some more blog posts.

I return back to work next week, but only for minimal hours. It’s just over 2 months earlier than expected, but it’s just so that we can get a little bit of coin coming in. We’ve not been great at sticking to the budget while I’ve been on leave unfortunately. Coming back earlier for a few weeks allows me to catch up on everything I’ve missed, earn some money, but also not have much time away from you so that I don’t miss anything. I’m really lucky that my work is so flexible and allows me to work from home. I’m also really lucky that your Nana is happy to look after you (she’s really excited actually).

I think that about sums up this month. Right now as I finish typing this you’re asleep in your cot with your butt up in the air. I’ve got the monitor on permanently so that I can make sure you’re OK. I’m pretty sure you got that sleeping position from me – I had some odd ways of sleeping as a kid! If you truly take after me you’ll sleep half on the bed and half off when you move to a proper single bed. I was pretty strange…. 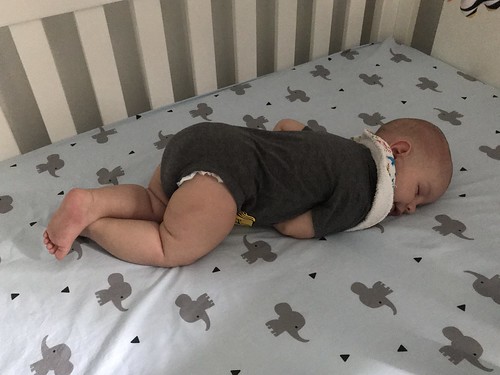 Adios little man. Time to take your monthly photo and get this post live!