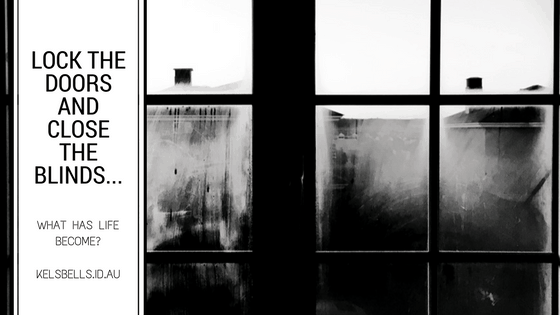 Ever since I started listening to true crime podcasts I became more freaked out about being by myself in our house. I heard the story of the East Area Rapist (aka “The Original Nightstalker”), and ever since then I’ve found myself locking all of our doors and looking around when the garage door closes. One of the women had pulled up in her car at home, when he grabbed her in the driveway. How scary! Admittedly it was in America, but still. It could happen anywhere.

The girls from “My Favourite Murder” (whom I saw live last year) have a catch phrase “Stay sexy, don’t get murdered” which I’ve implanted into my hubby’s mind too. In fact, they have so many freaking great catch phrases:

Whenever I yell to my hubby to lock the door he replies “I know, stay sexy and don’t get murdered!”

Anyway, I digress. Go listen to their podcast. It’s amazing.

Back to my point.

In the past 24 hours I’ve gone from being aware but uncomfortable, to full blown “no one should be able to get into our house at all, much less even see into it”. There were two specific incidents that have caused it.

Both of those stories scare the s**t out of me.

On another occasion last year one of my friend’s mother’s was the unfortunate victim of a violent bashing when people followed her inside, beating her up and robbing her. She was hospitalised with some very serious injuries, not to mention the mental trauma.

I remember the days of being a kid and running in and out of the house. I’d visit the neighbours, run home and grab something and take off again. I can’t even imagine that being possible anymore! Now, I feel like my doors need to be locked at all times. How is that going to affect my child as he grows up? If he’s playing in the backyard, is someone just going to come into the backyard and confront him? Help themselves to the house? Do I have to lock the door after my child and make sure he’s always got a key? Am I affecting his childhood by taking these precautions?

All I can say is that for right now I’m revisiting our setup at home. I’ve already identified a couple of areas that need to be improved already. They’re things that I had been mildly uncomfortable about before now now that I’ve heard these stories it’s gone beyond mildly uncomfortable.

I want these things fixed now.

I’d like to feel safe in my own home and not have to lock every single door. Sadly, I think we’re beyond that now. I don’t think it’s possible. I probably am going to affect my child. I’d much prefer that than have him traumatised by a peeping Tom or a robber. What a shame.

What has life become?

1 thought on “Lock the doors and close the blinds…”