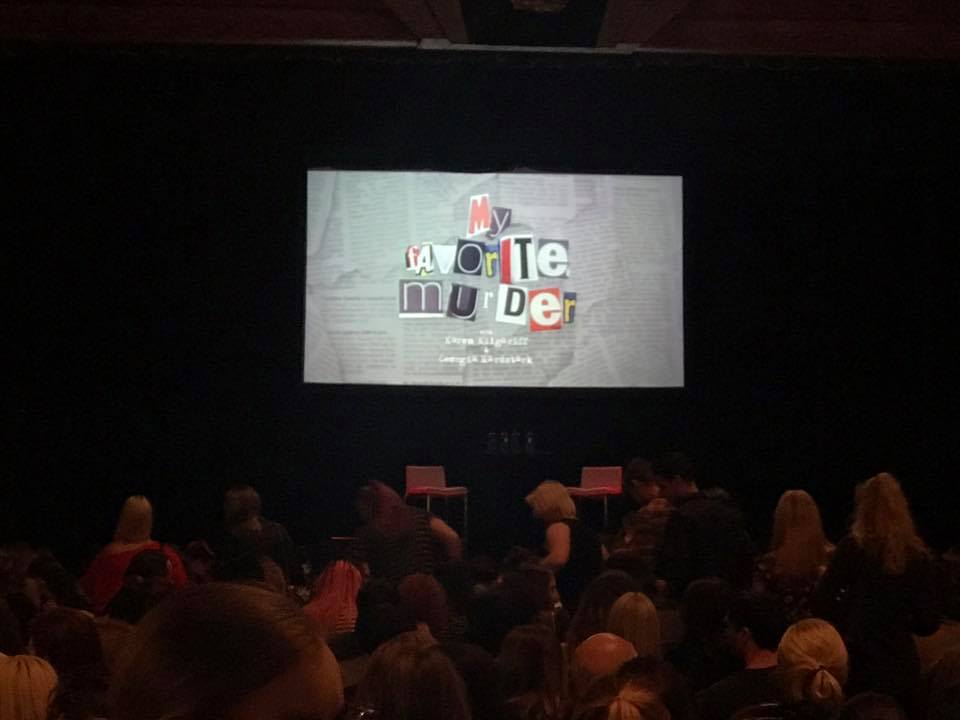 Last night my friend, Ness, and I headed down to Brisbane to the Tivoli. The plan was to sit and listen to people talk about murder for a few hours, then come home. Sounds like an amazing night, right? Especially on a school night – look at us crazy party people!

To put things into context, there’s an amazing podcast that Ness introduced me to a while back. It’s called “My Favourite Murder” (click here to subscribe to their podcast on your apple devices). It’s hosted by two women, and is a true crime comedy podcast. Essentially, without sounding weird, they talk about murders but react as they tell a story to each other, and come out with some hilarious lines.

Some of the quotes they’re known for:

If you’re into true crime I really strongly recommend checking it out.

The girls have been touring around in the US for a while, but finally decided to do an international tour. Australia and New Zealand being the destinations – lucky us! As soon as I heard they were coming, I just knew I had to go. Even though I’m over 34 weeks pregnant, I knew we’d be sitting down so I’d be fine (provided my water didn’t break of course haha).

Ness and I left shortly after work, and drove the hour down the M1. While it mentioned 7pm on the tickets, they actually didn’t take to the stage until 8pm. That’s nearly bed time for me these days!

When they came out it was like you were seeing a concert – lots of cheers and screams. They told us some stories about their flight over, and things that had happened in the short time they had been in the country. We were their first Australian show as well, which was exciting! They were extremely witty and hilarious, and I really enjoyed listening to the banter on stage.

After this show, they’re off to New Zealand briefly before heading back down to the southern states in Australia. I had introduced my sister to the podcast, and she and her partner were going to be seeing the girls when they reached Sydney.

Karen was the first to get under way with her story, and covered Katherine Knight. What a way to start the tour with a bang! If you’re not familiar with  the story, Katherine is the first Australian woman to ever be imprisoned without the possibility of release. To get a bit gruesome here, and to directly quote Wikipedia, this is what she did to her partner (after all the other stuff she’d done mind you, which is an amazing story in itself):

She stabbed him to death and then skinned him. She then put his skin on a meat hook, cooked his head and parts of his body, and placed them together with vegetables on plates with placecards with his children’s names.

Yep, Katherine is pretty memorable! Karen had the crowd completely engaged. As she read the story, we all gasped in horror, or laughed at the tangents we went off on. It was an hour of gripping story telling.

Following that, Georgia then went for a story that’s a little bit more local to me personally, that of school girl Sian Kingi. She was actually kidnapped and murdered on the Sunshine Coast, my home town. I was only a few years old at the time so have no recollection of it. It was back in the days when the area was still a bit of a coastal town, and so had those small town feels. If something didn’t feel write, you take note of it. Thank god someone had written the rego down of the car from the “strange man at the beach”. That’s how they tracked down Barrie Watts, and his partner, Valmae Beck. It was a very high profile murder on the Sunshine Coast, and there were a lot of people that were relieved when the two went to jail.

Finally, they covered a home town murder – a tradition at the live shows. There’s a regular episode on the podcast where readers write in with their own stories of home town murders and the girls read them out, so this was the live interpretation. They picked a member from the crowd who had written to them with their own local story. The girl they chose had a confusing story about a murder related to a Cat Society. It was hard to keep track of what was going on, but it was the banter on stage again that kept things interesting. To satisfy my curiosity I had to go and google the story this morning so I knew what it was actually about.  Props to the girls for choosing something different though, there’s a few popular crimes that I thought they may have gone with instead (Daniel Morcombe or the Bayden Clay murder).

Following that, the night was over and it was time to go home.

Overall it was an enjoyable night and I’m really glad I went. I’m not sure if they’ll be releasing a recording of this live show (they’ve shared live show podcasts in the past), so if they do I’ll be sure to update the post with a link. My final impression was that Karen’s story was amazing, Georgia’s felt a little rushed (maybe related to how much time was left). Yet I still feel it was worth the trip down.

For her redeeming factor, Georgia had recounted an amazing Theresa Knorr story in the most recent podcast about , a woman who should have never been allowed children. It’s extremely gruesome so I recommend only listening to that one under warning. Georgia talks about the Cold Case episode as well, which you can watch on youtube if you’re interested (amazingly they even show crime scene photos with the bodies).

If you haven’t listened to the podcast before and you enjoy True Crime then I highly recommend it. I’m excited to see if they do release recordings of their shows in Australia, and I can’t wait to hear what stories they covered when my sister goes to see them!

Are there any home town murders that you know of that you would share if you were hosting a similar show?