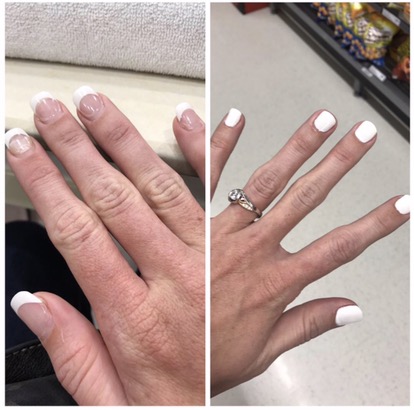 I got married 8 weeks ago (it’s our 2 month anniversary tomorrow and we are going out for dinner – woohoo). I knew that from that day, I would be taking away a husband.

I didn’t expect to walk away with a newfound love of fake nails.

See, I have man hands. Seriously.

Nothing wrong with men having hands of course, they’re extremely useful. A lot of men have done productive things with their hands. I can’t say they’ve had beautiful phalanges though.

Generally when I think of man hands, I think of long digits and rough skin. There’s usually a scar or two, and some sort of callus. That’s my hands in a nutshell.

Knowing that my hands would be on display with a new shiny bit on it, I got the fake nail set. Then for two days I struggled to pull up my pants and pick up anything in general. Just last week I spent about 2mins bent over trying to pick up 5c off the floor. I became an expert at putting pressure on the end of an object with the hope that it would flick up the other end instead.

When the nails were first applied (the day before the wedding) I freaked out about how much pain I was in. It felt like some bastard was biting on them incessantly. I can only compare it to the feeling of someone trying to pull your fingernails off entirely. It was not fun!

Thing is, despite all the pain and inconvenience I loved them. They brought a femininity to my hands I’d never had before. It was mutton dressed as lamb, but mutton has its place in the market. There were other benefits too:

But they’re a bitch to type with. Hence now back at work full time, and trying to get a ton of stuff done, I finally gave up.

I went and got them removed today, and in my wisdom decided to get shellac so I still had long lasting nail colour and wouldn’t be tempted to bit my nails.

Not in my wisdom I decided to get white, thinking that white isn’t a bright colour and it would keep them subtle.

I totally forgot that white is only BLOODY BRIGHT. If it was dark, I could light up the room with them. If the office needs someone with skeleton hands to point something out, I’m their lady. I can capture someone’s attention incredibly easily with these index fingers now!

Look at these manly babies!! I know you’re secretly jealous.

I spent the afternoon rediscovering the sense of touch, since the tips of my fingers hadn’t felt anything for 8 weeks. Scratching my head suddenly felt interesting. And oh my goodness, the freedom in typing on my work computer! The alphabet never felt so good.

I don’t foresee myself going back to fake nails unless there’s a specific event that I need to look good for, and willing to feel the sensation of something tearing apart my skin cells. I’ll pretend it’s a massage.

I’ll keep with the shellac though. It’s easy.

Maybe next time I’ll go sparkly pink. You know, so I don’t stand out. Because I’m smart like that.

10 thoughts on “The time Kelsbells stayed girly for 8 weeks”