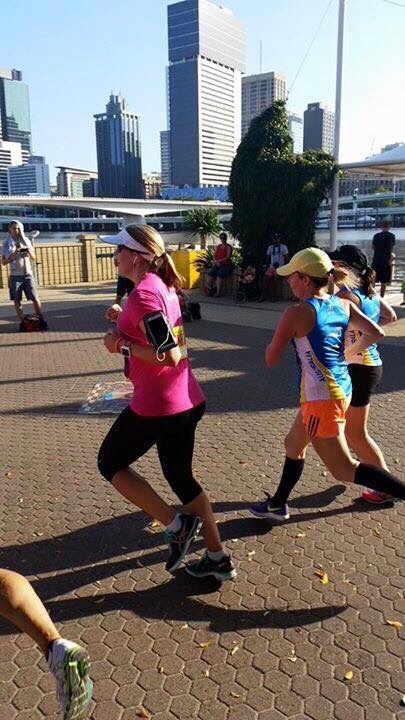 Two weekends ago was the International Women's Day 5km Fun Run, a running event held in Brisbane. It's a beautiful run, starting at South Bank, making it's way across one of the bridges over the river, around and through the Botanical Gardens, over another bridge, then back alongside the river through South Bank to finish back where you started.

If you're not familiar with Brisbane, that run basically means you're running through some nice greenery in the middle of a concrete jungle.

It's my second time running this event, and it's a bit sentimental for me. It was this event where I finally summoned the courage to enter in an event by myself. I can't even begin to explain how huge that was for me. At the time it felt so natural as well; I didn't need a running buddy, or someone there cheering me along. I ran it myself, then went for breakfast with my sister afterwards before driving home. This is the same girl that used to be upset if the boyfriend (at the time) wouldn't come to the shops with me – I didn't like doing anything alone.

This event also raises money for the Mater Hospital, with funds aimed at going towards assisting people with cancer (e.g. wigs, babysitters for single mothers etc) plus a cure for breast cancer, which I'm proud to say my mother is a survivor. I've also had friends affected by the terrible disease, and my own scare. I was touched to see they now provide “Tribute Cards”, so that you can dedicate your run to people. Afterwards, they collect the cards and put them on the “Tribute Wall”. I had donated my run to my mother, my friend “E” (I didn't write her full name in case she didn't want a mention), and most importantly, to the future generations who won't know what Cancer is. Thanks to those that donated for me, I really appreciate it!

One of my 52s this year is to run 5km in under 30mins. I had entered the race last year thinking that with enough training I would have been at that point by now, so optimistically entered myself into the “Under 30mins” group – the sub-30min official time would have been perfect for ruling off the 52 item. The reality was that I haven't been running while I got my core and my hips into shape, as they have been troubling me lately. I've actually only run 5km once in the past 6 weeks, and that was a 36min effort on Thursday. So as it was I approached Sunday with the mentality that I didn't expect to get under 30mins, and that I just wanted to focus on having a safe and enjoyable run.

That's how much I was out by.

I had the race of my life and finished in 30mins and 9 seconds. A new personal best by at least 2.5mins. I was stoked at how fast I went, but gutted that I missed it by only 9 seconds. Now I'm on the hunt for my next race so I can beat that time!

I had such a great time running the race, and was thrilled that Mario was keen to come to the race with me. Even though he wasn't running (although men were allowed), it still meant the world to have him at the finish line cheering me on. We had set up my garmin to live stream my position via my phone (hence why the huge brick on my arm in the photo above – I don't typically run with my phone) so that he could keep track of where I was at. He was surprised with how fast I was going, and having gone for a walk around the grounds he had to quickly retreat to the finish line to make sure he was there on time!

If you're ever keen for a nice, enjoyable fun run, this one is it. Everyone in the entire race is always having a great time, with smiles on their face.

Who's keen for next year??