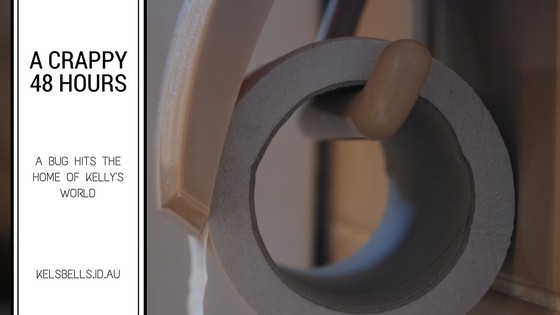 It’s been a bit of an interesting 48 hours here at Casa De Kelly’s World. I got hit with a bug, and we’re still not sure whether it was gastro or food poisoning, but it’s not been pretty.

On Wednesday I spent the entire day out with the little man and his aunties at the zoo. When we got home I was exhausted, but felt OK. Mario got home from work, he took Luca and the next thing I knew I passed out on the couch for an hour. It was nice, extremely rare, but unexpected. I had developed a bit of a headache too, but at that point it wasn’t an issue.

That night just before bed I grabbed a bottle of water and had a drink. Suddenly my stomach started churning. I complained to Mario, but managed to fall asleep. Overnight I had the usual wake ups to feed Luca, but nothing out of the ordinary.

The next morning seemed normal. Mario went to work, and I got on with things at home with Luca. I had all these grand plans of playing with him, and while he was napping, doing a ton of housework. I had written a big list on the chalkboard and was ready to kick some ass.

Then the rumbles began.

Suddenly, I found myself having to go to the loo. Repeatedly. I was still able to get stuff done, but the toilet sessions were becoming a bit too frequent. Thankfully Luca is a great bub, so whenever I needed to go I was able to either lay him on our bed and go in the ensuite, or if we were down the other end of the house, strap him into the swing and go to the regular toilet. I was starting to feel a bit low on energy as well, despite trying to keep fluids going.

Finally things started to come to a head. I had been rocking Luca trying to get him to sleep, when I knew I only had seconds to get to the toilet. I walked quickly (with my butt cheeks clenched very tightly) to the bedroom, put Luca on the bed and went to the loo. From the ensuite I could keep an eye on him and make sure he was safe.

On this occasion he lost it. He was tired and needed a sleep, and didn’t appreciate being put down. We’re talking the full blown scream “I’m very unhappy” version. Unfortunately I had to let him ride it out, because in my state there was no way I was able to get up from the toilet without making a mess (unless of course it was an emergency like if he were to look in danger of falling off the bed, in which case nothing else mattered).

Mario to the rescue

Usually when I’m sick I try to suck it up and press on. I was a workaholic before I went on maternity leave, so if I was sick you needed to physically take the laptop from me to prevent me from working.

With a baby the game has changed.

I had to suck it up and ask Mario to come home. Thankfully the boss gave him the all clear to take leave and after about 20mins Mario arrived home. He took Luca, and I laid down. Straight away I passed out for an hour.

The rest of the day passed in a blur. When I was awake I was on the couch, the toilet, or feeding Luca. I had zero energy. I tried to stand to rock Luca and was quickly told to sit down. Thank god, because I felt dizzy every time I stood up. Mario did everything, and I did nothing. He looked after me so well!

That night I started to feel like things were getting better, so thought he’d be fine to go back to work the following day.

Early this morning disaster struck again. I had gotten up to feed Luca, so at the time was sitting in the nursing chair.

I felt my stomach rumble again.

It wasn’t an overly large rumble, not like the previous day. However on this occasion I had a baby laying over my stomach putting pressure on my intestines. I thought I could ride it out, feed Luca and put him back to bed then go to the toilet.

I don’t know how long I sat there nursing, but let me tell you, it was the best workout for my butt! My buns of steel were clenched so hard. When I thought Luca was ready to be put down, I braced my abs and my butt and leaned over the cot to put him back down. Just as I thought I was in the clear he awoke.

I picked him up and started rocking again, thinking of the fact my husband was sleeping blissfully in our bedroom. I was mentally cursing him. I finally began to contemplate waking him and asking him to take Luca.

Mario to the rescue vol. 2

Appearing out of the darkness, our hero of the day appeared. I nearly threw our baby at him, and charged down the hallway to the toilet.

I barely made it.

Reluctantly, I admitted I may need his help again for the day. And he really has helped. It would have been extremely difficult looking after Luca today. There would have been tears, and this time from me.

Thankfully right now I’m feeling better. Another day of rest seems to have done the trick. We still don’t know whether it’s gastro or if it’s salmonella poisoning, but I’m leaning towards the salmonella. I haven’t vomited, and the only nauseous feeling was that bit on the first night. Other than that it’s been all intestinal. There’s also only one food that I ate that no one else did, and the timing of it matched salmonella.

I’ve rested again most of the day, and drank fluids to keep up the hydration levels. I’ve also had a probiotic to try and help my gut recover.

I really don’t like getting sick, and it’s been a long time since I’ve had any bugs of the toilet nature. But they suck! I’m just so grateful that Mario was able to stay home and help me, I know that other people aren’t as lucky with their own partners. But trust me, I do not take it for granted.

At least it was fun to drop the poo jokes on facebook though! Go on, anyone got some great poo jokes to share?