You know those all-time bucket list items that you constantly think “one day I’ll do it”? Not like my 52 list, which is an everyday kind of list with the odd big ticket item. The list of the big scary things that you hope one day that you will do but you’re not ever sure you’ll actually make the effort to do it. Running a half marathon was in that list for me.

I signed up for the Sunshine Coast half marathon for a couple of reasons.

I have 38 weeks until race day. At first, I started looking at doing a 5km training plan, then a 10km training plan and then a half marathon plan. One successively after the other. All up that was going to be about 30 weeks even.

Then I realised the Nike Running Club app has a half marathon training plan. You can configure it to be a variable number of weeks, with a max of 26 weeks. All up that gives me a buffer of 12 weeks.

Considering my training, I need to account for the fact that I’m going to get injured. It’s a given. I’m going from nearly 0kms a week to gradually increasing mileage week-by-week. At best it will probably just be my knee playing up a bit, for which I’m already doing my VMO exercises to build up the strength. I’m also going to be doing yoga to loosen my hips and stretch out the rest of the muscles. But I expect there will come a time where I need to take a week off here and there.

Giving myself a 12 week buffer means that I can afford to take injury breaks and not screw my training plan. If all things going well (and it would be wonderful if they did) I could finish my half marathon training plan, run a test longer run and see how I go. Maybe not the full 21.1km, but somewhere around there. Then I can take a week off, and do a smaller training plan to prepare for race day.

To help myself get motivated and keep going I’ve created a calendar for myself. It worked well when I was training for the 5km race I did in August, so thought I would do it again. Thus, behold my plan for November! 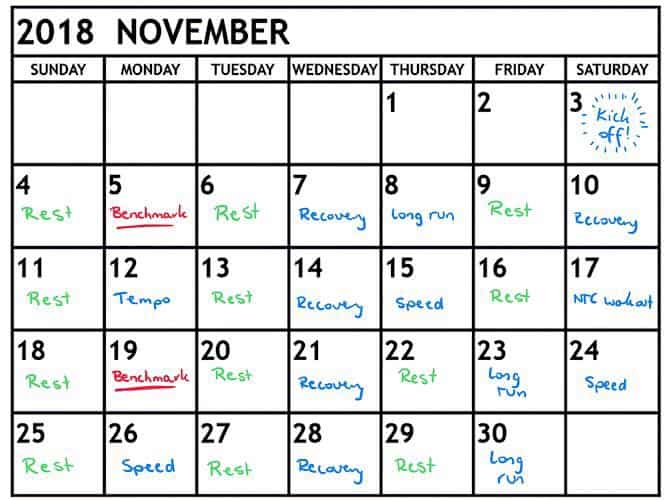 I’m quite new to this training. I’ve done MAF training before, and just random running. This time I’ll be running with purpose. From what I understand about the NRC training plan it adapts based on your fitness and how hard/easy you found the sessions, so it will be interesting to see how it changes.

I’m going to try and blog my preparations, although it’s highly unrealistic to imagine I’ll be able to do it weekly. I’ll keep checking in every now and then. But it will be fascinating to see what I think of the app, given I’m normally a Garmin runner and this is making me use my Apple Watch a bit more (hello convenience from integration).

Of course, it’s way more fun when friends are involved!

I’ve already convince a friend of mine, Lenore, to sign up too (it was a bucket list item for her as well).

I’m also planning on dedicating one of my 52 items to Park Run next year (the weekly 5km free running events). I’ve discovered that one will be starting up in my home town next year, and have already offered to help with volunteering. I’ll be running in them regularly as well.

And finally, I’ve reached out in the group Running Mums Australia. I’ve introduced myself to some of the other women based on the Sunshine Coast. At the moment their weekly runs they do together are longer distances than I can do, so I’m holding off joining them for now. But as soon as I get some mileage and run fitness I’ll be sure to join them when I can. It relies on hubby being happy to hold down the fort at home when I do.

Nothing else to do but start…

So that’s it. Here goes! I’ve done my first run already, and tonight is the benchmark run. I’m going to be running inside on the treadmill tonight since the baby is already in bed. The temperature has been disgustingly hot today and the house is still sweltering, so I’ll be definitely sweating tonight!

I would say wish me luck but I want to earn this, not luck. So wish me good health instead!