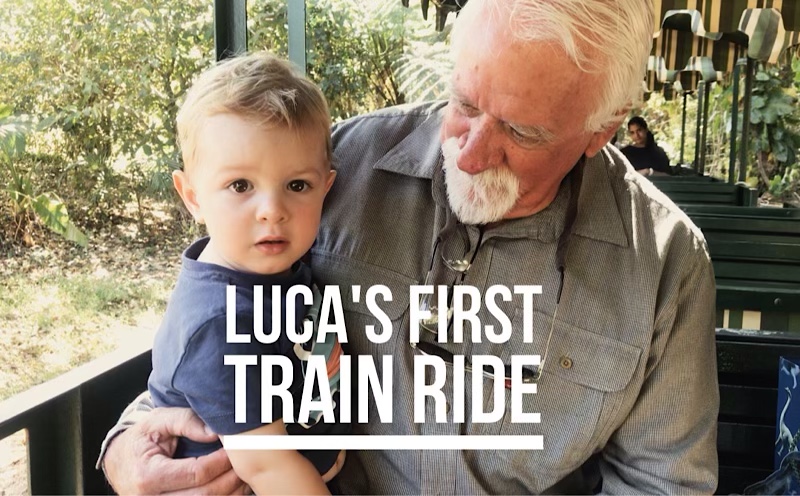 After watching him play with Thomas yet again, this week I randomly decided I wanted to take him on a train. Not just any train, a proper train train. Not just our metal cage commuter trains. Ideally it would have been the beautiful Mary Valley Rattler, which I have never been on but would love to one day (bucket list).

There were a few problems with that idea.

The first was that it’s a fair drive for us, and I just wasn’t keen on doing that mid-week. The second was that my husband works on Wednesdays, while I don’t. He was already going to be missing out on this experience, and to do it with something as special as the MVR just didn’t sit right with me. Especially for $60 a ticket. I wanted to save that for a family activity day.

So I decided that I would take Luca to the nearby Big Pineapple to ride the train there. And secondly, I would invite my dad. It was recently Father’s Day, and on top of that my grandfather was a station master, so the trains bring back a lot of memories for my dad – they’re pretty special to him.

We had a wonderful time! There’s not much to the Big Pineapple at the moment as there’s a lot of building work and renovations going on, so there wasn’t too much to do. There’s the train, the zoo, and a small cafe at the front. Oh, and a high ropes course.

I made sure Dad got some quality time and sat with Luca on the train, while I hung back and just took some video footage of it. And admittedly felt my heart swell watching the two of them together – to be honest I’m not sure who was providing the most commentary! Luca was initially pretty concerned, but soon warmed up to it all.

On a separate note, I’m trying to make an effort to record more and improve the quality of my videos. It’s all because we’re taking our first family international holiday later this year, and there’s going to be lots of memories that I’d love to share with Luca when he’s older. I plan on recording our holiday a lot.

The thing is, because of my lack of desire to get in front of the camera I find the videos don’t really capture the emotion of the moment. I mean, it’s fun to watch, but you’re sorta guessing what we’re thinking.

I’ve been watching my friend, Tamara from the Relatable Mum, make amazing vlogs and grow her YouTube channel. I love seeing the excitement on her face, and hearing the stories from the moment. I love, love, love her videos (if you haven’t seen any I strongly recommend going to check her channel out, she’s super cute and her excitement about things is contagious).

Inspired by her videos, I’ve decided I’m going to give talking to the camera a crack. Properly. I’ve tried one already that I spoke about on here (I think) that I haven’t gone through with publishing, which is no longer relevant so it’s not worth sharing. But it at least brought my discomfort to the surface and I dealt with it by editing a video of myself. Man it was hard, and it put me in the worst mood! I’m not going to consider myself a vlogger though. I’m not creating a channel, and I’m not abandoning my blog.

So, stay tuned…you’re going to be seeing this face a bit more often now. Not just behind the words.