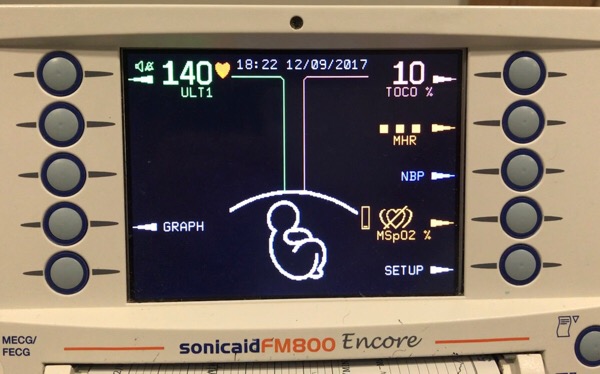 I swore that when I started writing about my pregnancy that I would cover the good, the bad, and the ugly. When I fell pregnant, I searched for blogs of people going through the same emotional roller coaster that I was. Instead, I found tons of “pregnancy is wonderful and glowing and rainbows” – the complete opposite of how I was feeling. So I made my promise to cover it all.

This is one of those stories.

Warning – if you can’t handle gory details, maybe skip this one.

The night before last, Monday night, was another typical night in that I struggled to get any quality sleep. Acid was in my throat again, and I felt like I was going to throw up. As a result Tuesday was a hard day for me, and I ended up coming home from work early. The plan was to have a sleep, then catch up on work that evening (at home). It’s my final week in the office before maternity leave (there’s 2 weeks I’ll be working from home), and I didn’t want to get behind.

Instead, when I came home and laid down sleep just wouldn’t come. Finally at 5pm I decided on a new tactic. You get sleepy after sex right – so maybe that would work? I was not wise in my sleep-deprived wisdom. Either way, Mario was down for some frisky business.

Well, it was not as sexy as it sounded.

In the middle, we realised there was blood. About 50c worth immediately visible, and when I went and wiped, more coming out (it wasn’t a cut on the surface). It was bright red – fresh blood.

I tried not to panic (not very successfully) while Mario rang the hospital. He described the situation, and the call was made that we should come down for some monitoring and just check in on bub. The nurse explained that bleeding in the third trimester after sex was quite common, but to err on the safe side we should come in.

All things came to mind – had we just brought on labour? Should we be putting our packed bags in the car? I fed the dog, we cleaned up, and we were on our way. I messaged my boss to be safe just so he knew what was going on if I wasn’t online that evening.

When we got there, we were led into a room. We were left alone for about 20mins (Mario remarked that if they weren’t rushing it was a good sign). I tried to calm myself down and sat there quietly in the recliner. If you didn’t know me you would have thought I was being patient. If you know me well, you’ll know that my being quiet is me stressing out (or I’m extremely angry).

Eventually they brought some machines into the room, and I was checked for both my blood pressure (128/78), and my pulse (80 bpm, higher than normal but I was anxious, so it made sense).

I was also connected to the ECG machine with straps around my tummy so we could listen to bub’s heart rate. He was fine, and we could see his heart rate spike every now and then as he moved around inside my uterus. We waited for about half an hour or so to see if he would go back to sleep so we could see his resting heart rate (he didn’t – an omen of things to come perhaps). I did have a few cramps/tight feelings, and a tender spot on my uterus.

We were allowed to record the ECG machine too, so if you wanted to have a listen to bub’s heart beat, I’ve posted the video below. The clicking sound is the print out that appears just out of the view of the video.

The midwife phoned our OB to run him through the results, and took a urine sample so they could make sure everything was fine there. The OB was happy with the results, which was good. They said I could stay in the hospital for another hour for monitoring if I still felt uneasy, or since we lived so close, head home. If anything concerning happened we were to phone and come back. We opted to head home.

To sum up the findings, their gut feeling was that the cramps were just a “post-coitus cramp”. The bleeding was probably just an irritated cervix, which is common due to the increased blood flow. We probably would have encountered this issue earlier in the pregnancy, but unfortunately for Mario it’s been uncomfortable for a while, so it’s been quite a dry spell (sorry Mario!!).

We came home, and I laid on the couch just feeling my tummy and making sure bub was moving around. The cramps hadn’t occurred again since the hospital, although there had been more blood. It was starting to turn brown, which was a great sign. It meant that it was old blood, and tied in with the irritated cervix theory.

I was able to get to sleep by about 10pm, although we’d decided Mario should sleep in the spare bedroom for the night. That way my tossing and turning wouldn’t wake him. Our mattress is soft too, so we had a theory that his body being in the bed was also contributing to my lack of comfort while sleeping too.

I have managed to have a decent sleep (better than anything in the past week or so) but I’m feeling quite drained today. My body feels heavy. Bub hasn’t been as active as other mornings, but we put a doppler on him and he was kicking along at 150bpm. 15mins later I could feel him shifting around in my tummy, so that was a good sign.

I’ve opted to stay home for the day, and will work from here instead. That way I can keep my feet up and rest when required. I’ve been asked to call my OB once the office opens at 9am to try and get fit in for an appointment today where possible, instead of the scheduled appointment we had for tomorrow.

Even if it’s just the irritated cervix, I just want to try and not stress out, hence the working from home instead of the office. I’m lucky to have a great boss and flexible working arrangements, otherwise it would be a lot harder.

To look for a bright side of all of this, it meant we’d had a test run for the hospital. While we had been sitting there I had realised all the things I wish I’d packed in case we went into labour. We didn’t think it was labour so hadn’t packed any of the bags. In hindsight, that was probably a bit stupid.  I also realised I hadn’t thought about hygiene. I had hairy arms and legs, and for some reason that was what I was most concerned about! I’ll be pulling my finger out and reviewing my hospital bag, and certainly keeping familiar with the razors!