When we moved into our house we always knew we would be redoing the backyard at some point. There were a few things that bothered us. Mostly, that it was on a slant with only a small amount of flat, usable ground. There was a random garden that jutted out of the middle of it as well. When we started pulling out the weeds that were there when we first moved in, we found so many random things in there – bird baths, lights etc. It was completely neglected.

In order to get it under control we knew there would have to be some major work. There would be excavators, and a lot of hard work.

Last week, we finally got things under way. The plan was to have it all done by the time baby came along, since we knew it was going to be noisy.

Here’s the before and after:

We had an excavator arrive and work through both Thursday and Friday. He ripped out that horrible random garden, as well as some of the tree stumps. In the  far back corner we had previously had a huge palm tree, which we had removed as soon as we moved in. The stump remained however, so the excavator helped us to get rid of that. Once it was gone, it looked like we had a meteorite landing zone! Mario is 6ft 4, and you can see just how big it is in comparison to him. From a stump. 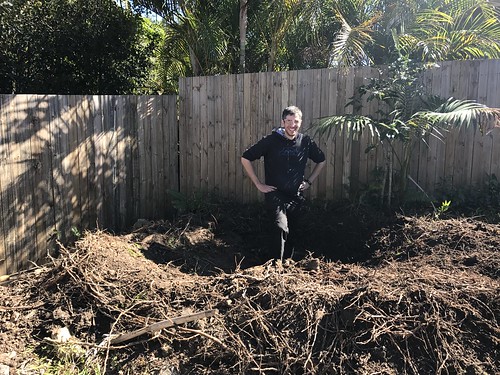 The remainder of the each day was spent removing all the excess dirt and gardens by the excavator. They also cut out some excess cement from the slab at the other end of the house, and removed that too. While all of this was going on, there wasn’t too much anyone could do at that point – it was all the excavator. All up, he did 12 tip runs of just dirt, and another of green waste. In my mind that’s a lot.

Unrelated to the backyard, our new couch arrived on Friday as well, where I now write this post from. I love it. 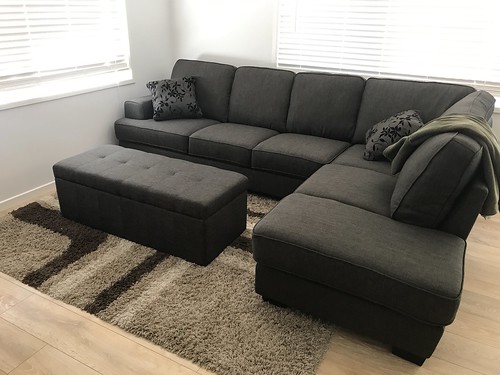 Saturday started early. My father-in-law was helping, and a friend of ours, we’ll call him T, came to lend a hand as well. The boys got stuck in early. We had removed our front fence while the excavation work was going on, and the plan was to move the fence line forward to our boundary and rebuild it.

While all of this was going on, I went out for a walk with a friend and had breakfast. I came home, then it was my turn to get stuck into the house work. There was no point trying to vacuum, dust or mop. Our washing line was on the other side of the house, which meant it was protected from the work they were doing. That meant I was able to do a ton of washing and finish off folding the remainder of the new baby clothes we’d been gifted. I cleaned bathrooms, and started on a general tidy up. I also made sure the boys were well hydrated, and made lunch for them as well. In the afternoon when I was sure there wasn’t going to be more dust flying around I vacuumed and mopped the house.

Soon enough, the fence was up in its new location. To give you an idea of how much room we had gained, all of this space in this picture is additional land.

Previously the fence had been situated just after the hose reel you can see on the right. With all the extra room forward, we now have a yard that stretches 27m front to back – nice!! I tried to tell Mario that we could build my own 25m lap pool, but he wasn’t interested – dang.

They also started on the retaining wall, which in the pic above you can see the  start of it with the posts and white mat stretching around the edges. The excavator had returned Saturday morning, and had removed more dirt for us as well as dig out the holes for the steel posts. My FIL had been busy mixing the cement, putting the poles in and filling them up with the cement.

Another big day, this one focused on just the retaining wall. The timber was cut, and the first row was slotted in around the edge of the yard. There was something related to pipework that was done, and finally gravel. You can tell I really know my stuff about this, can’t you! *grin* I can only really describe the end result, not the process they went through.

My mother-in-law arrived late Saturday afternoon, so on Sunday she was outside helping the fellas.

For me, I again busied myself inside. I did more washing and folding, dusted and vacuumed, cleaned up some neglected places in our bedroom (the side tables that seem to collect random stuff), finished addressing our thank you cards from the wedding (one of my 52s), posted our old couches and coffee table on gum tree/facebook, and more. At one point I even baked banana chocolate chip muffins! Even though I hadn’t been outside as busy as the guys, by the end of the day I had sore feet. There was no way I was going to complain to them though.

Mario had dismantled the bali hut that was at the end of the housel, which we managed to sell online. That was collected on Sunday, so one more thing out of the way for us. Previously that was Mario’s outdoor cooking area, so for now it means that all of our outdoors stuff is now crammed under the pergola. Eventually that will be extended and they’ll find their new home.

At the moment this is how the backyard stands: 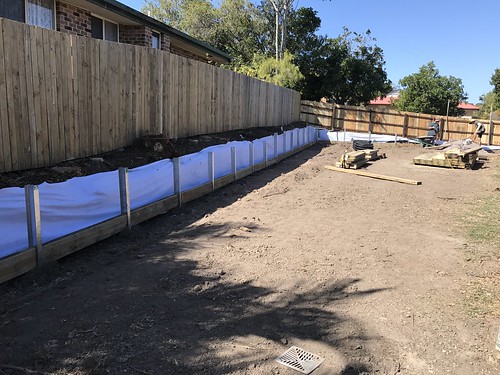 There is still a lot left to go, and it’s going to take us a while!

I’m so proud of what they were able to achieve, and thank you to my in-laws and T for all that you did. Thank you to Mario for your never-ending energy!

I think they need another weekend to recover now!