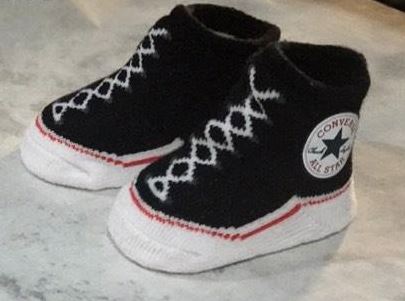 After what has felt like forever, we finally made a public announcement yesterday that we’re expecting a baby. Hooray!

We had been discussing how we wanted to do it, and ultimately it was important to me that we were both represented in the picture. Me appearing in the picture though? Hell no. Mario is known for his baking/cooking skills, and I’m known for my love of converse. So we put our heads together and we came up with this: 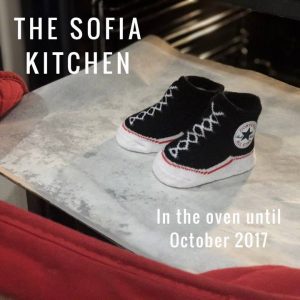 I can’t say how much of a weight has been lifted off now that everyone knows. I’m not great at not sharing things about myself – I write a blog about my life after all! I had started telling more and more people, especially as my belly started to come out. We made the announcement at work yesterday as well, and it wasn’t much of a surprise to anyone!

How we found out

I’m sure people have all of these beautiful stories of telling their partners. In the typical Kelsbells way, it wasn’t beautiful (although it makes me laugh).

We had figured something was up when we were just starting out with the renovations. I had vacuumed a room and wiped down the window sills, helping to try and prep the room for painting. Just that small effort alone blew me out, and I had to sit down for over an hour. I was exhausted. Over the next few days I noticed I had moments of feeling off, and one day I walked past a thai place and the smell made me feel off. Suddenly it clicked. I spoke to Mario, and we decided I should pick up a test that day.

Mario’s dad had been staying up at the new house while we were renovating, and as he was now painting, had moved to stay with us. Which meant it was going to be extremely difficult to take the test in secret – we wouldn’t be able to hide our emotions from the results (one way or another) . The opportunity arose when Mario and I came to the new house at night (Mario’s dad stayed at our old place) so that we could put in the new down lights. Mario got to work, and I went to the bathroom.

I had only just enough time to pee on the stick and wipe before it came up “pregnant”.

I quickly finished in the bathroom (washed my hands too mind you) then ran out to Mario. He asked “how did you go” and my reaction was to just throw it onto the table in front of him. He looked, said “great!” and kept working! He claimed later he had been expecting it so he was already excited by it. Hence the lack of change in emotion.

In comparison, I was shitting my pants.

I rang my sister, and blurted it out to her. Someone had to react with me! I was feeling very, very overwhelmed. Mario and I had talked about having a child sometime, but now that it was happening it felt very surreal.

After that I rang some friends. They all gave me the support and responses I needed. Meanwhile, Mario just stood there giggling at me as I continued to freak out. My head was spinning. I don’t think I calmed down for days.

Over the next few days I kept taking tests. Each time I waited with baited breath, wondering if it would come up negative. It never did. I even took one a month later, just for a laugh. Still pregnant.

This is why my blog has been so quiet lately. It’s all that I’ve had on my mind, and I couldn’t prematurely share the information. This week we just got the results of “low risk” from our chromosomal abnormalities test, and decided we were good to go public. I just hope it’s all smooth sailing from here too.

In secret, I’ve been writing fortnightly posts sharing my experience so far – the good, the bad, the ugly. I’ll start posting those from tomorrow onwards until we catch up to where I am now.

As of today I’m 13 weeks along. The bub is due in October, so looks like we’ll be having a very different Christmas this year! I honestly still can’t believe it, but each scan it gets more and more real.

7 thoughts on “The news is out there – we’re having a baby!”