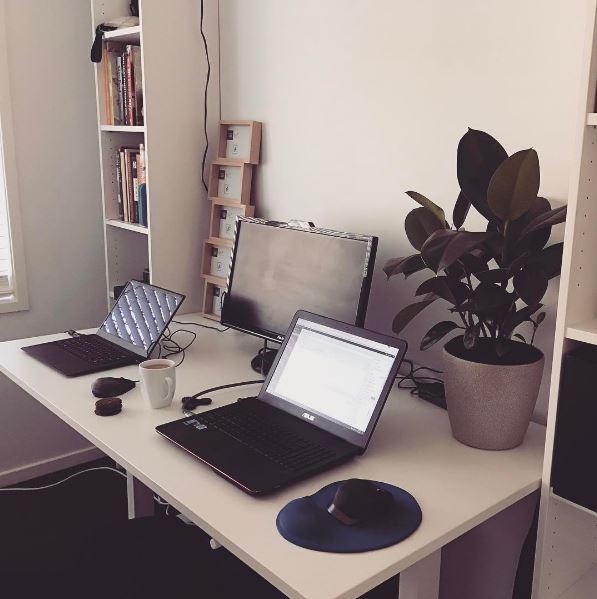 I’ve been a bit slack in posting photos of our new house now that we’re moved in. Truth is, I imagined in my mind posting this beautiful interior design magazine-esque image for each room. It was an entirely unrealistic vision. The reality is that we are saving,  picking a room, and slowly doing the bits and pieces. The study/home office makeover part 1 was the first to begin.

When we first bought the house this room was probably one of the best of the bunch. We think the previous owners must have used this for a fourth bedroom, but for us it wasn’t necessary.

The walls were still the off-pink’ish colour, but the carpet was fine enough. There was an awkward cupboard in there kind of like the ones you would buy from Ikea to bolt into a room that didn’t have a built in. We ended up knocking it down, but used two of the internal shelving bits for our laundry. The walls had a lot of damage to be repaired though (in fact the entire house did).

I’m kicking myself I didn’t get a more effective before photo…I’ve probably got a video or image on the GoPro, but I don’t actually know where in the house that is right now. 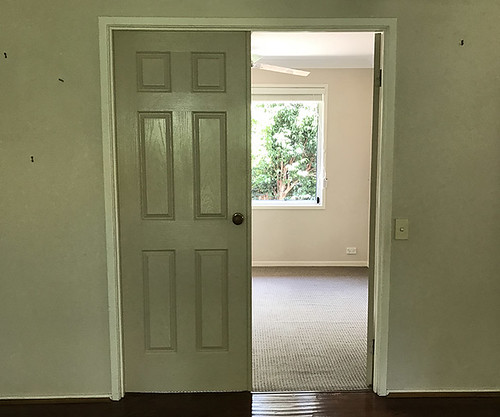 First things first was to rip out the carpet. Once the cupboard was knocked down, we found a hideous aqua carpet in there. I would have loved to see what the room looked like originally with that colour!

During the renovations I was mostly involved with this room, patching the walls as you can see from the white marks in the picture. I took this photo part-way through, by the end of it the walls resembled a join-the-dots picture. You can see I’ve also taped the window frames in preparation for painting.

My father-in-law was the champion of painting in this house. He took over from there, and converted it into a much nicer, fresher room with lexicon from Luxury Paints.

We also redid the lighting. It was extremely important to me that when working in this room that the lighting was bright enough that I wasn’t struggling to see. My eyesight has already deteriorated pretty badly in the last few years, and I wasn’t keen on making it any worse. We have 4 x LED down lights, with a dimmer available as well. It certainly makes the room bright enough! 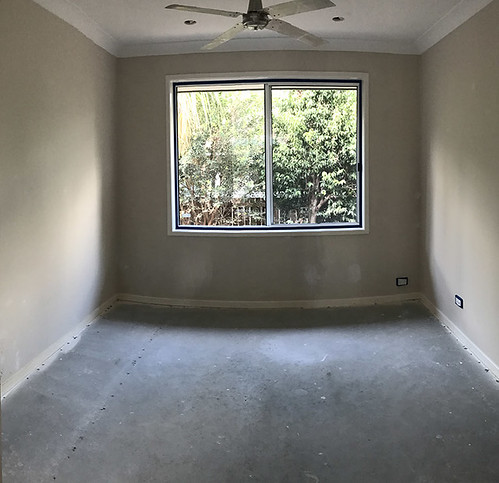 When we first moved in, we were extremely limited in what we could do furniture wise. The bulk of our budget had been taking up with the foundations of the house: walls, flooring, lighting, air conditioning installation, security screens, outdoor removal work etc. The big things. Thus we had to make do with the furniture we already had and worry about the niceties later. 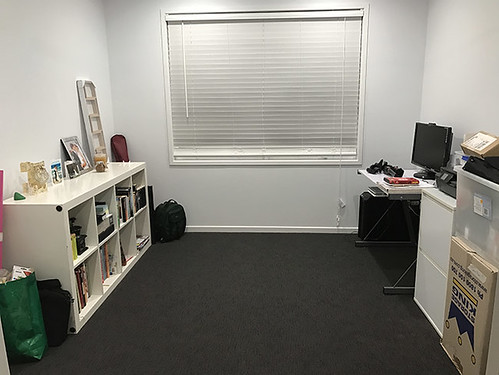 The bookshelf on the left laying down is an old Kallax bookshelf I’d bought from Ikea back in 2011. It used to stand up vertically, hence the black dots that were used to protect the floors. This unit has really stood the test of time, since it’s been moved 5 times in its lifetime. It also used to have the desk combo (although mine had a solid leg on the end rather than two poles). Those pieces are at my in-laws, so whatever we end up doing with this in the long run we may end up putting it back together. The unit has come out of the moves relatively unscathed, with just a few minor scratches here and there. Not bad for a purchase under $200.

You can see from the picture how much of an effect repainting the room has had. It looks blue/grey in that image, but during the day with the blinds open it reflects the greenery from outside, and has a slightly more warm feel to the room.

The desk on the right was Mario’s, and used to live in the cupboard of the spare bedroom. I have no idea how he used to work from it, since:

Since we’ve moved I’ve been working from home a lot recently due to a major project, so it’s been super important for me to have a good working environment. I was trying to make it work, but I was extremely glad when Mario proposed going to buy a new one.

The chair we used to have we tossed during the move. The material was falling off and it just wasn’t that comfortable anymore. As such, in the interim I’ve have to make do with a dining room table. 8 hours on that baby and I had the sorest tailbone I’ve ever experienced. On the plus side it has meant that I have been getting up to walk around every half hour, if nothing but to give my butt a rest!

Everything else was just sort of stock piled in the room just to get out of the way, not exactly pretty.

We still don’t have the budget to do the full room yet, but it became essential to get some of the key pieces. Thus, this is where it stands now (the door is hiding the second bookshelf on the right). 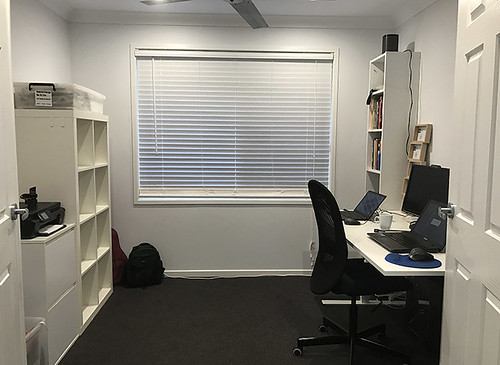 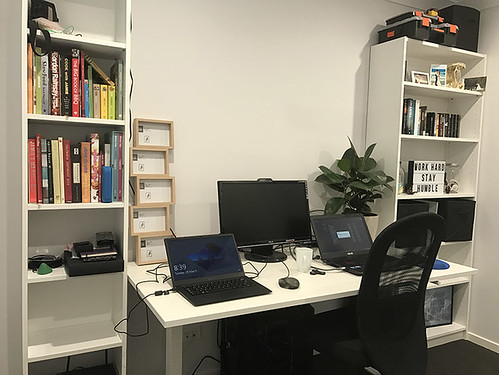 We still have tons that we want to do in this room yet. You can see there’s a photo frame on the table that needs filling, which I’ll have to go get some replacement ink and then start to print out some images. I haven’t decided what ones I want to put in there yet though.

Above the desk I plan on making a custom wall hanging, thank you pinterest. It will basically be a metal mesh frame, which I can then use to peg on any paperwork, images or quotes that take my fancy. Something similar to the following, that I’ve already pinned on my pinterest board.

We’ve really only focused on the right hand-side for now, as that’s the most used side. However we’ve got some grand plans for the left.

First up is my all-time wish for an amazing armchair, and this one has had my interest for a LONG time.

It’s also got a footstool to go with it, which I love.

I’ve got a vision in my head of some sort of coloured throw on it as well just for a bit of brightening. I can’t wait to curl up in this chair and read a good book. I’ve already sat in the chair at Ikea, and it was amazing. Ok I need to confess, I’ve probably sat in it 5+ times so far. Every time I’m there, I jump on this chair when I see it, it’s that good.

It’s always been a dream of mine to have an amazing library filled with books, so we’ll be buying some more billy bookshelves to go alongside the chair. I’m kicking myself for donating some books to try and save on space during the move, I really wish I had just kept them stock piled in a box somewhere. At least now I have some inspiration to buy some more to fill up the shelves. Funnily enough, if you look closely at my books in the existing bookshelf you’ll see my kindle tucked in there – that’s a few hundred books on its own! The wonder of technology hey?

Lastly, more decorative pieces will be required to fill the bookshelves. I’m also thinking a rug on the floor, something to protect the carpet a bit and just break up the grey.

If you have any ideas or suggestions, I’d love to hear them! It will probably be another few months before we get to revisit this, but I’m still super excited for when the day comes. That chair……