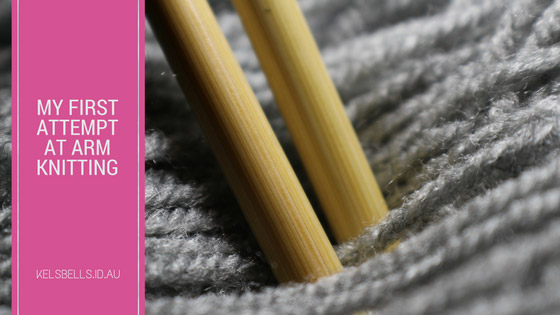 Yesterday was another tough day. I was extremely tired, after having about 3 – 4 hours of sleep total overnight (and broken sleep at that). Mario was the same. I wasn’t sure if Luca had another cold or if it was just the tail end of his last one, with a bit of the cough remaining. Whatever it was, it had us up constantly the night before and we were exhausted.

At one point during the day I reached my emotional limit. I was so drained. If you had asked me to make a decision right there and then I couldn’t have done it. My brain had shut down.

Suddenly I started craving a mindless and repetitive activity. Something that made me feel productive without being difficult, but gave me time to recharge.

Finding what to make

I started looking online for patterns, looking for something other than just a standard garter knit scarf. I wanted to try something new.

Suddenly I saw a tutorial on creating a chunky throw blanket in only 45mins using only your arms (as the needles) and some thick yarn.

It was called “Arm Knitting”.

I read more, and decided I needed to make something that would let me test the waters without it being as big as a blanket. I also had no idea where I’d be able to fit 45mins into my day while Luca was so unpredictable. Maybe after Luca went to sleep, but even then we weren’t sure how much time I’d get before he needed breast milk for comfort (it helps with the sickness after all). I needed to make something smaller and faster. A scarf seemed more suitable.

I’d received a Spotlight voucher for my birthday from my sister, so off we went. I found some yarn and got a couple of balls in pink and a couple in blue. I didn’t exactly have a reason for grabbing two colours other than “I don’t know what colour I want”.

From what I’ve learned from trying to sew, finding a good online tutorial is hard. It’s so easy to become overwhelmed and give up. It’s the exact reason why I still haven’t made my first piece of clothing on the sewing machine yet. I’m still stumped on where to begin

Thankfully I’d sourced a good youtube video for arm knitting before I left for Spotlight. I followed this one from Simply Maggie.

I had to watch it a few times, and also rewind some sections several times over. Then when my husband spoke to me in the middle of it I had to rewind again. But I got there!

I started the project a few times, first trying it with the double strands from the same ball like they mentioned. Then I realised it was too short, so I undid it. Then I tried it from the two balls, still too short. I tried it with one blue and one pink strand, and decided I didn’t like it. Every single time I was unwinding it and starting over. It was starting to get frustrating.

Finally I did it all over again with a single strand of one colour. When I got to the end I tied on the second ball of the same colour and kept going. I was finally progressing!

I had decided I would make the scarf for a friend of mine I was seeing the following day (today). Thankfully she really liked it, and I didn’t mind it myself! 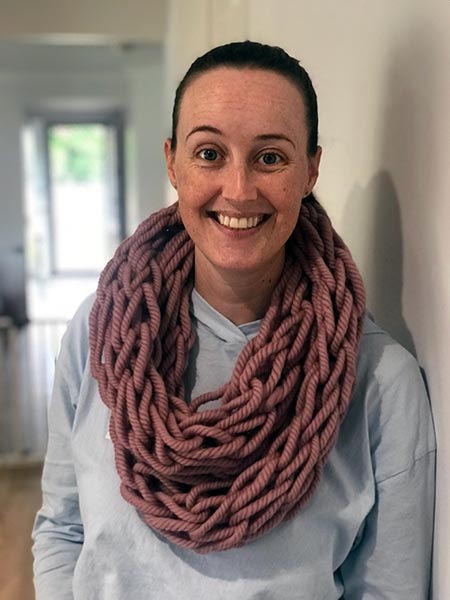 From the time I started with a single strand of one colour, to completing the final product, was about 30mins or so. Once I had the first two rows done and I knew what I was doing I moved through quickly. It’s incredibly easy to do once you know what you’re doing.

It was the perfect activity to do at the end of a hard day. This is exactly why I enjoy knitting – it’s such a nice way to unwind (no pun intended) and almost ignore the world. I can watch the TV,  forget about my problems, and just relax.

If anyone’s thinking about giving it a go I highly recommend it. The yarn cost me about $20 and that’s it. It was wool too, so if you wanted to go acrylic you could get cheaper. It’s not an overly expensive hobby.

I’d love to know what everyone thinks of my finished product! Do you think you’d wear it? Is anyone else going to try arm knitting?