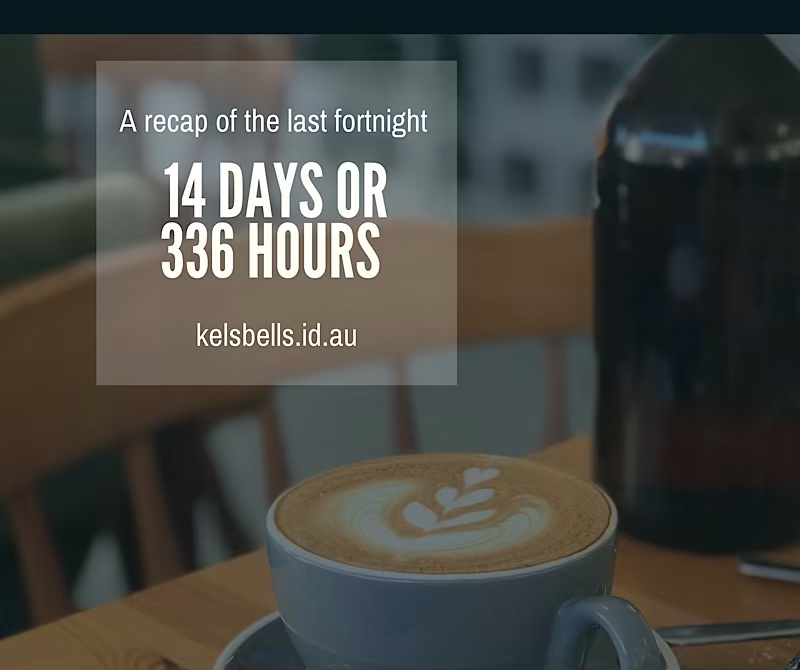 Winter is definitely here! As I write this I have a blanket over my legs and I’m wearing a jacket probably best reserved for the southern states, but I get cold easily, so whatever. Bonus was that it only cost me $20 from K-mart, win!

A lot’s been happening lately in this part of the world! Luca has reached 20 months old, and he’s so super fun. I keep meaning to write an updated Luca letter so I can capture all of the memories. If children were born at this age I would have so many more. He just keeps me laughing and so entertained. Of course, we’re still dealing with some tantrums and testing of the boundaries, but for the majority of the time he’s an absolute sweetheart.

Before we get into the recap, I just wanted to provide you with a visual treat before it’s all about my snotty body.

I meant to go for a walk at lunch today but after eating at my desk I got so focused on what I was doing that I didn’t think about it again until 5pm! I decided to go for a quick walk to get some fresh air and was rewarded with a beautiful sunset over #CottonTree. Just gorgeous. #nofilter #sunshinecoast #sunset #water #silhouette #lovewhereyoulive

Running-wise I’ve had to take a break this past 1.5 weeks again. What I thought was a common cold was either a flu or a respiratory virus. I was blowing my nose repeatedly coughing up gunk so thick that I ended up puking from not being able to breathe.

The worst was on Wednesday morning when I threw up about 6 times. My hubby had gone to work, and was only there for about 15mins when I called him and asked him to come home. It was my usual day off to spend with Luca, but I just felt so flat and unable to muster any energy, and with the throwing up I knew that I wasn’t in a good way.

Once my husband got home I went and saw the doc, he told me it was either of the two (flu/virus) and requested I go to get a nasal swab done to find out. He also wrote me a script for some antibiotics, but asked that I hold off for one more day to see if I start getting better. If I did, then it was viral and the antibiotics were of no benefit.

I went to get my nasal swab done, and when I arrived the waiting area was full. I grabbed a number and sat down, and then coughed….and coughed….and coughed. My coughing was such a deep bark that it was embarrassing to sit there. After 20mins I walked out – I didn’t want to get anyone else sick, and I wanted to go back to bed.

As it turned out I felt better on Thursday and I didn’t need the antibiotics, so that was good. I also didn’t bother to go back and get the nasal swab, so I don’t know exactly what I had. But given that I slept for 11 hours on Wednesday, and was only out of bed a couple of hours on Thursday before I went back for another sleep. Whatever it was, it was definitely more than a cold, that’s for sure!

I sat on the couch the other night and reflected on just how fast time goes. During the week it’s so repetitive. Work, come home, put son to bed, eat dinner, get half an hour of free time, go to bed. Get up, rinse and repeat.

Wednesdays are my day off to spend with my son, and we always make it quality time. Then weekends we try to do something as a family – usually we’re booked up with some kind of event with friends or family. Or we might have organised a day off to spend solo. This weekend just gone I had organised for my husband to have the day to himself, and originally he had organised to go offshore fishing but due to the wind and swell they didn’t head out. Instead he used the time to do some stuff around the house, chores or tasks that he had wanted to do for a while but not had time.

My friend and I had a great day heading around the coast. We first went down to Caloundra for a walk around the markets before taking a ride on the temporary Ferris Wheel they’ve set up for the school holidays.

A couple of shots from the weekend hanging out with @travelling_ness exploring Caloundra with coffee, babycinos, markets and the Ferris Wheel (temporarily there until the 21st of July, perfect for the school holidays). #sunshinecoast #caloundra #weekend #friends #lovewhereyoulive #ferriswheel #eyeofcaloundra #temporary #schoolholidayfun #lucamichaelangelo

It was Luca’s second time on a Ferris Wheel, and he was so excited that it was hard keeping him contained while we waited in line! Once on there he wanted to try and stand up in the gondola, which of course wasn’t happening. Reluctantly he accepted he had to hang out on my lap.

The view from the top was spectacular, and it was such a beautiful winter’s day. I had a total “Love where you live” moment.

It was nice to get to the end of the weekend and feel like it was time well spent.

So that’s me. Tomorrow I’m going to start to ease back into training again. I’ve got 6 weeks left to go until the half marathon (eeeeek) and I’m getting extremely nervous about my preparation. I’m still coughing a ton so I’m not going to run tomorrow morning, but I at least want to get up early and get in some quality treadmill time before work.

6 weeks and I haven’t run further than a 10k still. Arrrggghhhh, someone please remind me I can do this!