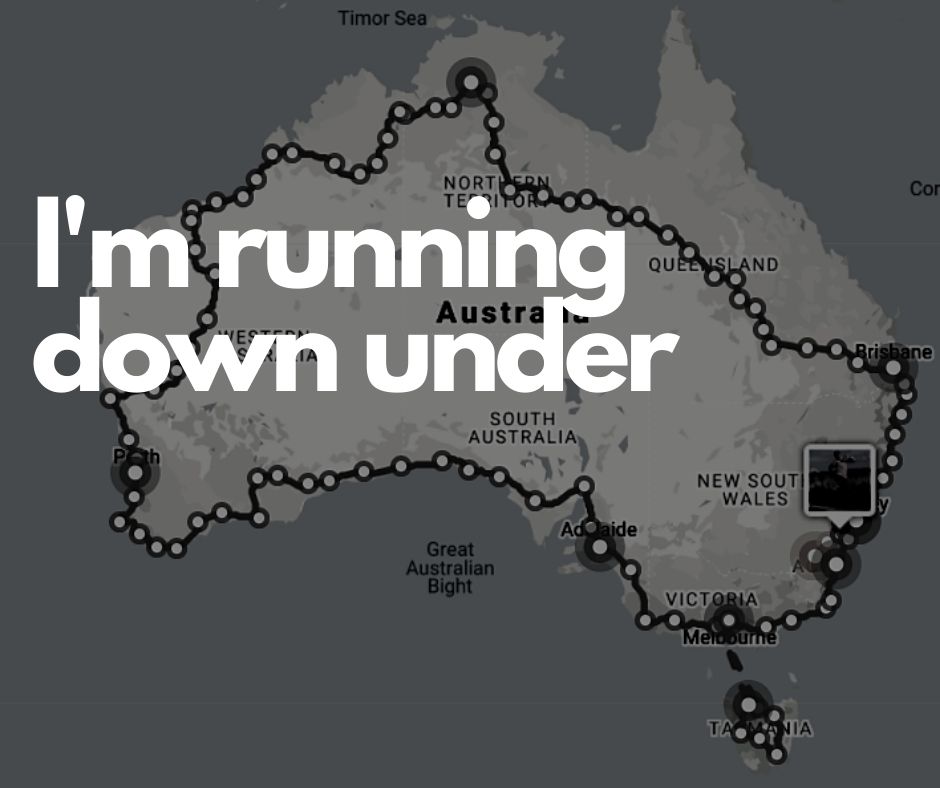 After a couple of days on the weekend of dropping some of my challenges/habits for 75 hard’ish, I’m back on track. I had 100% success today, and I’m so proud of myself for just getting on with it. Not beating myself up, or falling off the rails completely.

Normally I would just screw up, give up and go back to bad habits.

I had a productive day at work today, then went to the gym for a quick run on the treadmill before coming home. I had planned on doing a strength workout too but the gym was getting pretty full by that point. So I figured it could wait until tomorrow instead.

By the way – I haven’t really mentioned what I’ve been running for lately! As in one of the current events I’ve got going on.

I mean, it’s nothing big….it’s only going to take me about 9 years.

Presenting, the Run Down Under.

Runs of the world has a solo event where you pay $60 a year and you track your runs on a map. Eventually you run around Australia.

So why am I doing this? Because I love running, I love challenging myself and I love the motivation. This has been a bucket list event of mine for years, but I just kept putting it on the “one day” list.

I mean, this year has been pretty shithouse for a lot of people. I’ve been really lucky to come out of it as well as I have, mostly unscathed. But still, I wanted something to look forward to. So why not?

I’m doing another event with friends that’s going to take us about 1.5 years (I’ll write about that one later) so if I’m doing the distances anyway then I may as well sign up for this too, right?

The cool thing about this event is learning about different towns as you go, it’s awesome. Plus I got a really gorgeous running singlet! And I’ll keep getting one every year that I’m still going. I tried to find the picture of it but I couldn’t, and honestly, I’m too comfy on the couch to get up and put it on. So, another day.

So in 2029, when I’m finished this event, for shits and giggles, I can run back around Australia the other way. Or I could run New Zealand. Or the UK and Ireland. Or Europe. Or the USA. You get the picture. There’s options.

Anyways, it’s 9.30pm and I’m going to try and get to bed at a more decent hour tonight. Goal – get my habits all done early tomorrow so I can have a movie night with my hubby on the couch. Last night I got hooked on a movie and ended up going to sleep at 11pm. That sucked.

(Side topic – we finished watching the Challenger Disaster documentary on netflix tonight; it’s heartbreaking and infuriating – I cried several times, it’s worth a watch. RIP to the beautiful souls that were lost).

Plus, I have to get up in the morning early and get some mileage on the treadmill. I’ve got a country to run!

1 thought on “I’m running down under”