Oh get your mind out of the gutter…I was talking about a bike! My new bike! 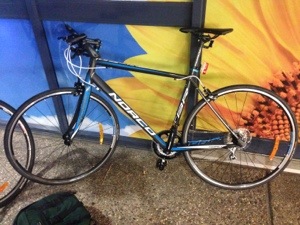 I recently agreed to ride 100km at the end of October with a friend in Melbourne's “Around the Bay” bike ride.

Because I'm in insane.

As part of that, I figured I should maybe look at buying a bike, since its a little bit necessary and all. On the actual day I will be riding my friend's bike so I don't have to fly mine down, but it wouldn't hurt to train so I don't die from the sheer pain of my ass on a bike seat.

My old bike was my old faithful, but I admit I neglected her after a few years. She slept outside in all sorts of weather with no TLC. When I took her for a ride a fortnight ago I found the back wheel was buckled, causing the rear brakes to turn on and off periodically. The front brakes just couldn't be put on at all. It was ok for a social ride (the brakes just helping to get stronger legs) but for training? Hell no.

So I waddled off and kitted myself up with:

I've been riding for a week now and it's fantastic. In a week I've managed to clock up 82km riding to/from work 3 days, one night ride with my friend (30km) and one solo trip yesterday (33km, during which I rode back in headwinds – so painful). This bike requires barely any effort to get some speed happening, I've been averaging 23km roughly without even trying too hard. I don't know if that's good by cycling standards, but I'm happy with it.

There's going to be some serious calories burned with this bike too. Riding to/from work is about 300 – 350 calories, and combine that with either a PT session or my morning run with my dog, then hopefully I should see some major weight loss soon. I've just finished my second week of dieting, and currently I'm down 3.6kgs, which is great.

My bum has been doing better with the bike than I thought, given the seat is not plush by any means. It's quite hard in fact! If I didn't have the lycra pants I think it would be a very different story though – the lycra pants are worth their weight in gold, and I daresay I'll have to buy another pair in the future.

It's exciting that a lot of my friends are getting on board with the cycling now as well. A friend from work and his family enjoy cycling so I've been with them a few times, and another friend has just gone and bought himself a bike as well. I also have a friend that I used to cycle with a bit together on our mountain bikes, and she has indicated that she's keen for a few rides.

Let's hope I get some absolute killer legs from all this working out!