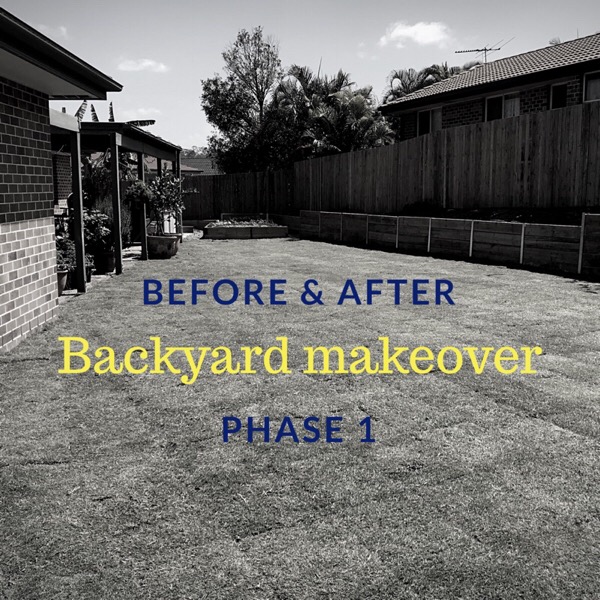 Check out the changes: 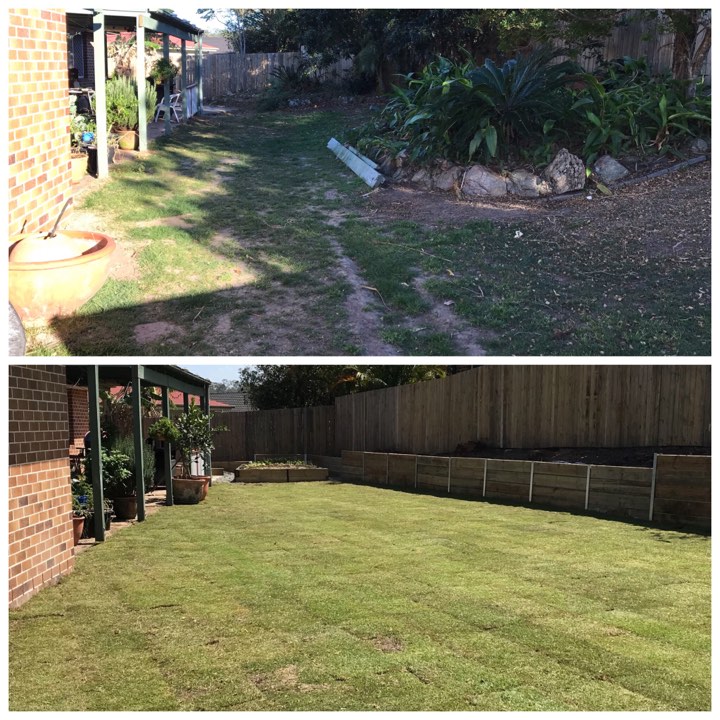 When we moved in we had a sloping yard with only one little bit of flat area. We had a period of super heavy rain earlier this year, and that flat area turned into a stagnant creek with bad drainage and gluggy clay. The garden consisted of a weird, jutting out ledge area with loads of random objects mixed in with weeds. At the top, just behind me out of sight in this photo, was something that we could only assume was a dodgy chin up bar, clothes line or old swing set (we have no idea).

For a back yard, it was pretty useless, and extremely ugly.

Over the last month, Mario, his parents, and one of our good friends, T, have been hard at work. Last week I wrote about the dust bowl our yard had become, and this week we have had the turf laid. Today I spent time watering it, as I’ll have to do each day for the next 4 weeks. Well, until baby comes and then someone will have to take care of it while we’re in hospital. Until then, the lawn is my makeshift baby (behind my fur baby).

On a high level from start-to-finish the process we had the following resources involved:

Missy absolutely loves it. She pranced about in the yard today, alternating between running full-pelt to the far end and looking at me (I’m not sure if she expected me to follow suit), or just doing flips on the spot. Right now her toys have been confiscated, and she’s gutted. When she chases her ball she skids at the end, and the last thing we want is for her to be ripping up the new turf.

I did try to get her to be a model this morning for some pictures, and this was the result:

When she gets too excited or anxious she licks her nose. I happened to snap a picture at the exact moment of asking her where her ball was to try and get her ears to prick up, and the tongue shot was too good not to include in the collage.

We are so overjoyed with the transformation of the yard. All up it cost about 11.5k, money that I personally feel was extremely well spent. We now have a yard that we actually want to spend time in. I’d love to get our real estate agent in as well and get his thoughts. It would be interesting to see what all our work to-date has done for the value of the property, not that we’re interested in selling!

As for right now, I’m just thrilled to have something nice to see when I look outside. The kitchen looks out on the yard, and standing at the sink it’s just a whole other feeling. It’s nice. I’m also thrilled my dog isn’t going to be covered in dust every night. Instead, it’s lawn clippings from her rolling on her back (seriously, she did that about 5 times today).

My only dilemma now – where am I going to put my hammock?!

4 Replies to “Backyard renovations: before and after”