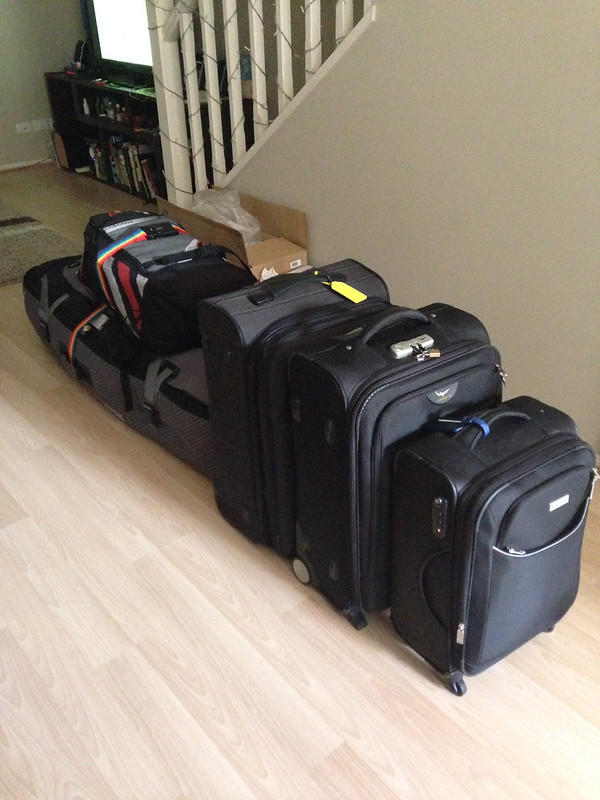 The day started early, rising and driving to the airport just on 6am. Mario’s mother was kind enough to drive us to the airport, and as we had so much stuff we had to take Mario’s car for the roof racks. There was only two of us, but in total we were taking:

Thankfully our reservation with Garuda entitled us to 30kg checked in baggage each, plus 23kg complimentary sporting goods each, then our 7kg of carry on – over 100kg of luggage allowance in total! So you can appreciate that with that much stuff to check in, we wanted to get there early and make sure we had no trouble.

When we checked in, they informed us that while we definitely had a reservation we didn’t have an e-ticket number. Let’s be honest, I didn’t, and still don’t, have any idea what that means. All I know is that we had to go to a counter at the end, give the lady our itinerary, and wait 10mins while she made calls and pressed buttons on the keyboard. Then we were handed the paper back, went back to our original check in desk, and continued to be processed.

The next issue was the weight of our bags. It turns out that there is a straight limit of 32kg per bag – any heavier and it’s deemed too heavy for workplace health & safety. Our big bag? 31.9kg – CLOSE call! It’s quite a big bag when you compare it with Mario who is 194cm tall, and with so much room it’s easy to get the weight up there. 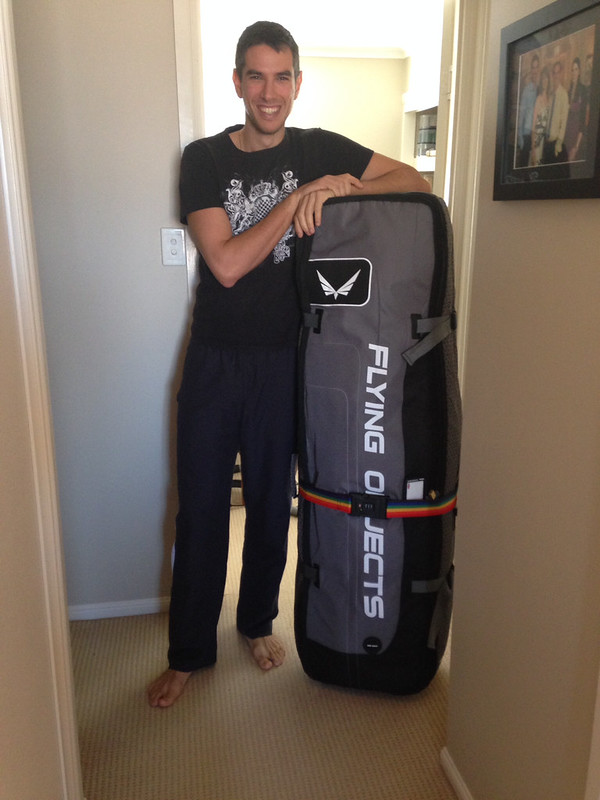 We made a mental note to change up the kite gear distribution for the return journey, then continued with the rest of the bags. Mario’s checked in bag came in at just over 15kg, and my own at just under. Then she turned our attention to our carry on bags.

We killed time until the flight departed, then after an uneventful flight we arrived at Denpasar. We had been told that we needed to pick up our bags there and clear customs, then transfer over to our other flight to Lombok. When we touched down we had just on 1.5hrs until the flight, and I was confident we would make it.

We collected our checked in bags, and waited for the sporting equipment. And waited. And waited. Then freaked out a little, while still waiting. Then we turned around and saw the bags just sitting there in the middle of the room. Completely unattended.

I thanked Mario’s insistence that we get the bags wrapped in plastic wrap. I admit I was a bit nervous about travelling with sporting goods, when you consider the infamous Schapelle Corby story with her bodyboard bag (heh – I accidentally wrote body bag first, but that’s another crime altogether and not the one she was convicted of). Not to mention the sheer value of the items – it was nearly $10,000 worth of equipment. Sure we had travel insurance, but the max value of the specific “high value” items that we could insure was only up to $5,000 so there was still going to be quite a loss if anything went missing.

We grabbed our bags and hurried over to customs. We swore when we saw the line.

It split in two, and we had the skill of choosing the line with the most criminals in it. Meaning that many of the people in our line took forever to be processed, then were lead away to private rooms. I didn’t like the look of that.

My sister plays a game when she gets to customs, in that the first one through wins. On this day, Mario and I were the clear losers. Normally I’m quite patient with the customs lines, but Mario was starting to freak out that we were going to miss our plane, so I felt my heart rate quickening. I reminded him that missing the flight wouldn’t mean the end of the world, to just take a deep breath and be patient – all of it good advice for myself.

After what felt like a thousand hours we were through, and off running through the airport. They had checked us into the flight back in Brisbane, but we still needed to drop our luggage and get to the gate, and we had no idea where we were going. Drew took off running with the kite bag and his checked bag, I wore a kite bag on my back, and rolled the remaining two bags through. Thankfully as we were charging I saw a dodgy printed “Transit shortcut” arrow, which we followed and it paid dividends as I’m sure it cut off a hell of a lot of distance. We got our bags checked in, made it to the gate, boarded a bus and got driven over to the plane. After the shortest flight I’ve ever been on (just over half an hour) we had made it to Lombok. 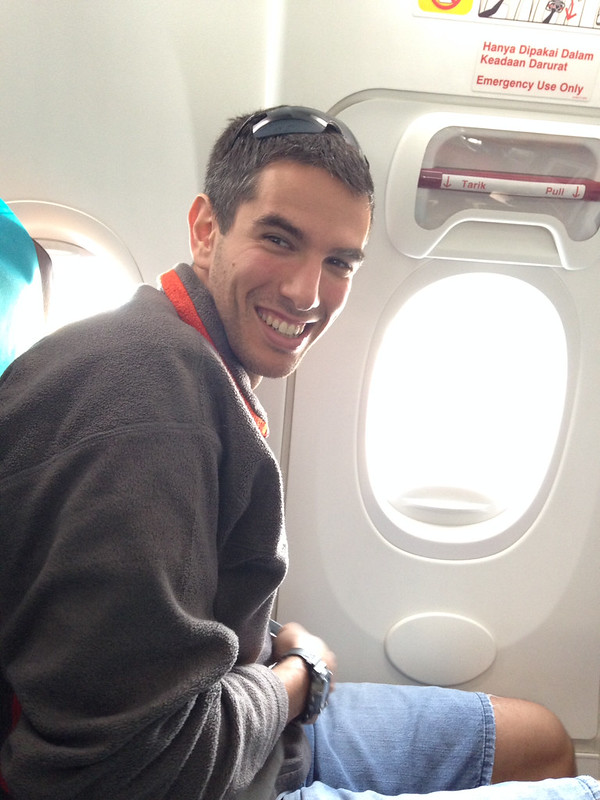 We had organised with our hotel to have a driver meet us at the airport, which I have always found to be a great plan when you’re travelling with a lot of luggage/people in a place you don’t know. We loaded up the car (even the driver was shocked with the amount of gear we had and we had pre-warned them), then jumped in and headed to the hotel.

I’ll go into more detail with how Mario handled it later, as he went through quite a culture shock and it deserves more attention than at the bottom of a summary post. One thing that we would soon learn is just a daily occurrence was the buffalo walking down a main road, as we had to wait for them to pass before we could pull into the hotel.

The buffalo eventually did move on, and we made it into the driveway. We checked in and stashed our equipment, then headed into town to find our friends that had arrived a few days earlier. We started walking in the direction that we thought was correct before giving in and asking some locals where to go. Barely anyone had any idea of where the cafe was and they just seemed to gesture without confidence, so it seemed asking for assistance was pointless. In the end we just walked in one direction to see where it would take us. We got to the end of the road, worried about where we were going and turned around again. We had just reached the road of our hotel when our friends roared past us on their scooters. We yelled out, they picked us up, and we headed to the restaurant to catch up with everyone.

After a standard uneventful dinner (no exciting Asian dishes to report in about) we returned back to our hotel room to pass out. We had a full day of exploring coming up!