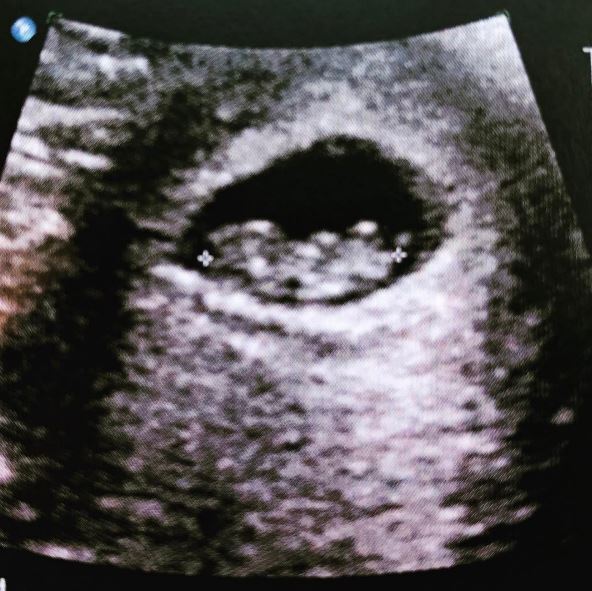 I think I’m finally starting to find my groove a little bit. I’m still eating way too much sugar to try and get through those super fatigue days, but I’m starting to understand my routine a little more. There’s a few tricks I’ve learned that are helping me get through the days. Maybe there’s a light at the end of the tunnel? Everyone keeps assuring me it gets better after the first trimester.

I’ve put on a few kilos now, and I know it’s because I’m not eating the greatest of foods. My sugar intake is too high, but I have no other idea of how to get through these clouds of fatigue. I’ve got some crazy deadlines at work that I need to hit, and I can’t spare a single moment.

I keep praying for the first trimester to be over soon, because people keep telling me it goes after that. Every day is a new opportunity for me to not give in to bad food, but I’m failing at the moment. I just need to keep trying to be optimistic.

It’s so hard not to feel ugly.

We saw the baby for the first time last week in the ultrasound. It was the dating scan where you can see how far along they’ve come etc. At the time we saw them I was 8 weeks on the dot, she estimated it to be more like 8 weeks 2 days, so not far off. It had a heart beat of 170bpm, motoring along!

I expected it to be some big emotional moment like you see in the movies. I also expected it to be harder to find. Instead it was there the very second she touched me with the ultrasound wand-thing. As soon as I saw it, my initial reaction was to utter the lady-like word of “fuck”.

This thing was really there. I am really pregnant. It resembled the pictures in my apps. It was a jelly bean with little arms and legs poking out. OH MY GOD.

We’ve started telling more people, mainly because I am not too good at pretending. This morning at breakfast a friend asked when Mario and I would be looking to have kids. He gave the line of “we’re not preventing”, and “it will happen when it happens”. He looked at me, I was biting my lip, he started laughing, and I said “oh screw it” and we told them.

I know we’re still at a risky phase (more in that in a second), and it means that if anything happens we have more people to tell it wasn’t successful. Having that discussion would be very hard to deal with, and there’s probably a lot of people that wouldn’t know what to say to help us cope (when it’s happened to friends/family of ours I’ve felt completely helpless).

We are blessed to have amazing people around us, and having them there to support us in that time would be something invaluable. I think dealing with it on our own would be a lot, lot harder. I read an interesting comment the other day, where the opinion is that we shouldn’t talk about miscarriage because it makes people feel awkward. In actual fact, maybe what that mother needs to cope? Honestly? I have no idea. I’ve never been in that position so I can’t even guess at what is best. I’ve seen friends and family go through it, and I hope to god I don’t.

I hope this isn’t coming out as insensitive to those that have, and I apologise if that’s the case.

I know we’re still not past the risk phase and there’s a chance that the baby isn’t growing inside me anymore. I know that I could potentially miscarry at any time. Luck is on our side, since apparently if you see a heart beat at 8 weeks you’re at a 98% chance of it continuing. The main issue we have right now is the down syndrome test. This will open up a political can of worms, but if we find out the baby has down syndrome it’s unlikely we will continue. I don’t think it would be the greatest quality of life for the child or us. Having to care for a child is stressful, having to care for a child with special needs is so much more difficult. I will put my hand up right now and say I honestly don’t think I could.

Have your own opinions, but that is mine. I would choose not to continue.

We get that test somewhere in the next fortnight, as well as meet with the ob for the first time. Once that’s done we’ll be able to announce it officially to everyone.

As for how I’m feeling? Still very overwhelmed, still fearful, and still very disconnected from this process.

5 Replies to “The pregnancy diary: Week 9”