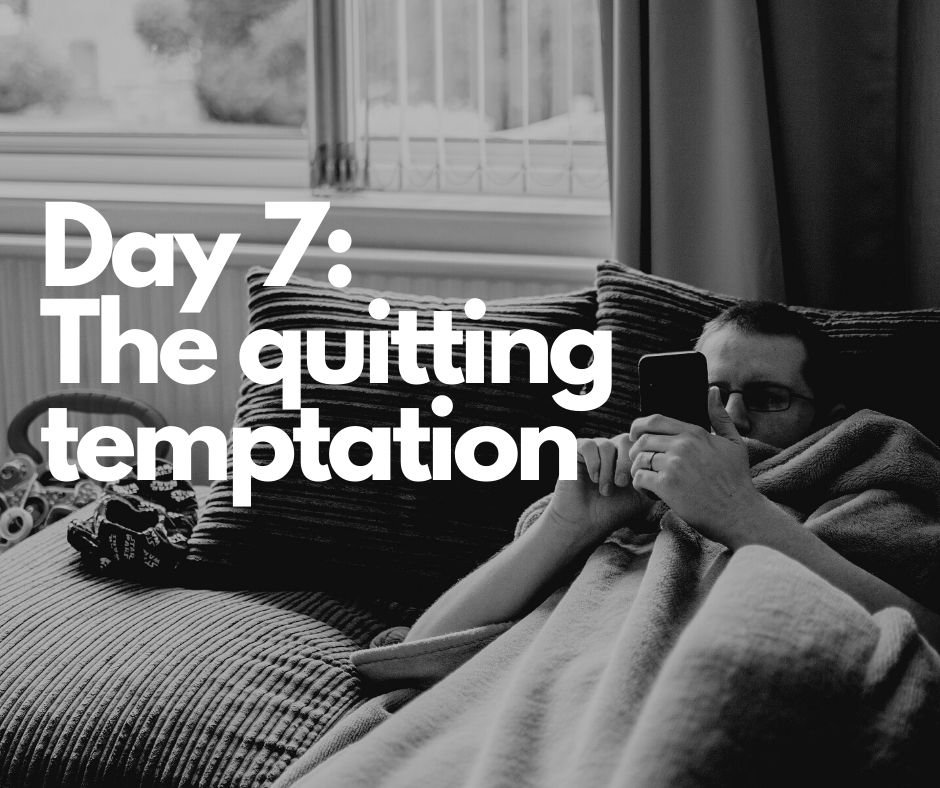 Today I wanted to quit.

I just hit a real flat spot today. I had no motivation or desire to really do much at all, and it took everything I had in me to just push on. Ultimately, I think the fact that I’m blogging this and I’m accountable to everyone is what got me through.

This morning I went to swim class with Luca, dropped him off and came home. I started working, and about an hour into it realised I had left my power cable for my laptop in the office. I had planned on working from home for the day, but that’s not exactly possible when you don’t have power.

I really wanted to just spend the day at home, comfy clothes, just ticking away. I didn’t want to have to put on a social face. So I ended up driving in, grabbing the power cable and coming back home. Then I ended up having a pretty productive day.

Food and exercise-wise was where I struggled. My legs were aching from the gym and doing any sort of walking just wasn’t appealing at all. Every part of my body was saying to just have a sloth day on the couch. I could walk tomorrow. Sure….if I wanted to fail?

Food wise was worse. I’m trying out intermittent fasting for 2 days a week, and today I discovered that having a coffee in the middle of the morning was technically breaking my fast. Shit. So I was drinking water instead, and slowly I felt a headache come on. Likely a caffeine headache.

(Side note – I just googled and it was definitely a caffeine withdrawal headache. Dammit).

I lasted until about 10.30, then I gave in and had a coffee. I had the headache threatening me by this point (sitting just over my left eye), and was debating whether to work from the office or home. I was cranky, and tired. I contemplated calling in sick, something I never do. I contemplated raiding the kitchen for chocolate. I thought about picking up takeaway on my way home from the office with the power cable.

Instead, I had a coffee, I went and got my power cable, I came home, and I had my lunch at 12pm.

The rest of the afternoon wasn’t all that eventful.

By the time the night rolled around I still hadn’t taken my photo, completed either of my workouts, and obviously hadn’t written my blog because here I am now.

I messaged a friend talking about giving it up. I messaged other friends who are doing the challenge to ask their opinion on whether they would classify it as a failure. I whinged.

Then finally, I put on my activewear, dragged myself outside and spent 30mins punching a boxing bag. Then I dragged myself inside, and walked on the treadmill for half an hour. Now I’m writing the world’s most boring blog post. Next I’ll be having a shower, and going to bed.

I need to get my shit together.