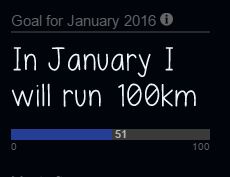 We’re halfway through the month, so I thought it would be fitting to provide an update on how I’m tracking with my goal to run 100km during January (for more information on this goal see my original post here).

51km, with 49km to go! I’m officially over the halfway mark, which is awesome.

I’m not going to lie, it was really hard to get back into it even with the goal in place. At first I started running every second day, with the intention of having a rest day in between, but then I was donating plasma so I had two days off in a row. I realised at that rate that I wasn’t going to make the distance, so I kicked it up a notch. Mentally I hadn’t gotten to the point of wanting to run daily yet.

I had a good run on the 6th, getting my time down to 35mins (not bad given I haven’t exercised in months). On the 7th my legs were pretty sore, so I ended up walking a bit towards the end and it took me 45mins.

On the 9th and 10th being the weekend, I used the opportunity to add a bit of extra distance to make up for the days I hadn’t been out. On the Saturday, Mario and my dog accompanied me so we walked down along the beach front at Mooloolaba (with the pup even scoring a swim in the middle). Given my dog’s ability to pee/poo on everything it was a 1hr 12min walk. On the Sunday it was the same thing, but this time I caught up with my friend for a walk and a coffee; bliss!

On the Monday I clocked my best run yet getting back to 34mins 30 seconds for the 5km, but that night my left shin was aching in a major way. I’d managed to bring on the evil shin splints – bummer! I tried running the following night but I could feel it building up so I added longer walking intervals and ended up clocking 39mins. I gave myself a couple of days off with rest and elevating my leg in an effort to encourage recovery. On the 15th I ran/walked, and on the 16th due to the rain I ran on the treadmill at the gym.

As it stands now my left shin is still aching, but it’s just a dull ache. I can walk without pain so I know it’s not too bad. I also know that the only reason I have gotten shin splints is that I went from barely exercising to suddenly doing 5km immediately, with an extra 10kg of body weight on top of that. That’s a lot for a leg to handle, especially when I have fractured my fibula before.

I still have full intentions of making the full distance this month, I’ll just need to be patient and not push it. I don’t foresee myself running 5km non-stop before the end of the month; not for the reason that I couldn’t but more that I’m afraid of what damage I would do if I did.

There are a few apps I’m using throughout the month to help with my running goal, which I thought may be of some interest: 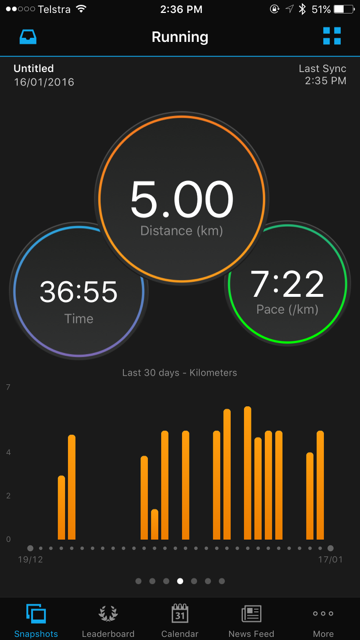 Am I enjoying my challenge?

You betcha! I’m back at the point where going for a run is enjoyable and a way for me to relax. I’ve been running a bit at night after work, which I’m surprised that I’m enjoying as much as I am. I’m not sure that this will be my ongoing routine though, as I know that once I get back into the swing of work and the stress builds that I will just want to come home at the end of the day and crash. I have a much higher consistency rate when I run in the mornings.

I can already feel the difference in my body too. My legs feel like they’re starting to get stronger again, and my resting heart rate has improved.

Ignoring the shin pain (brought on by my being a bit hasty and careless), it’s all been up for me and I’m so proud of how I’m going so far.

Now to finish this thing strongly and claim my biggest running challenge to date!