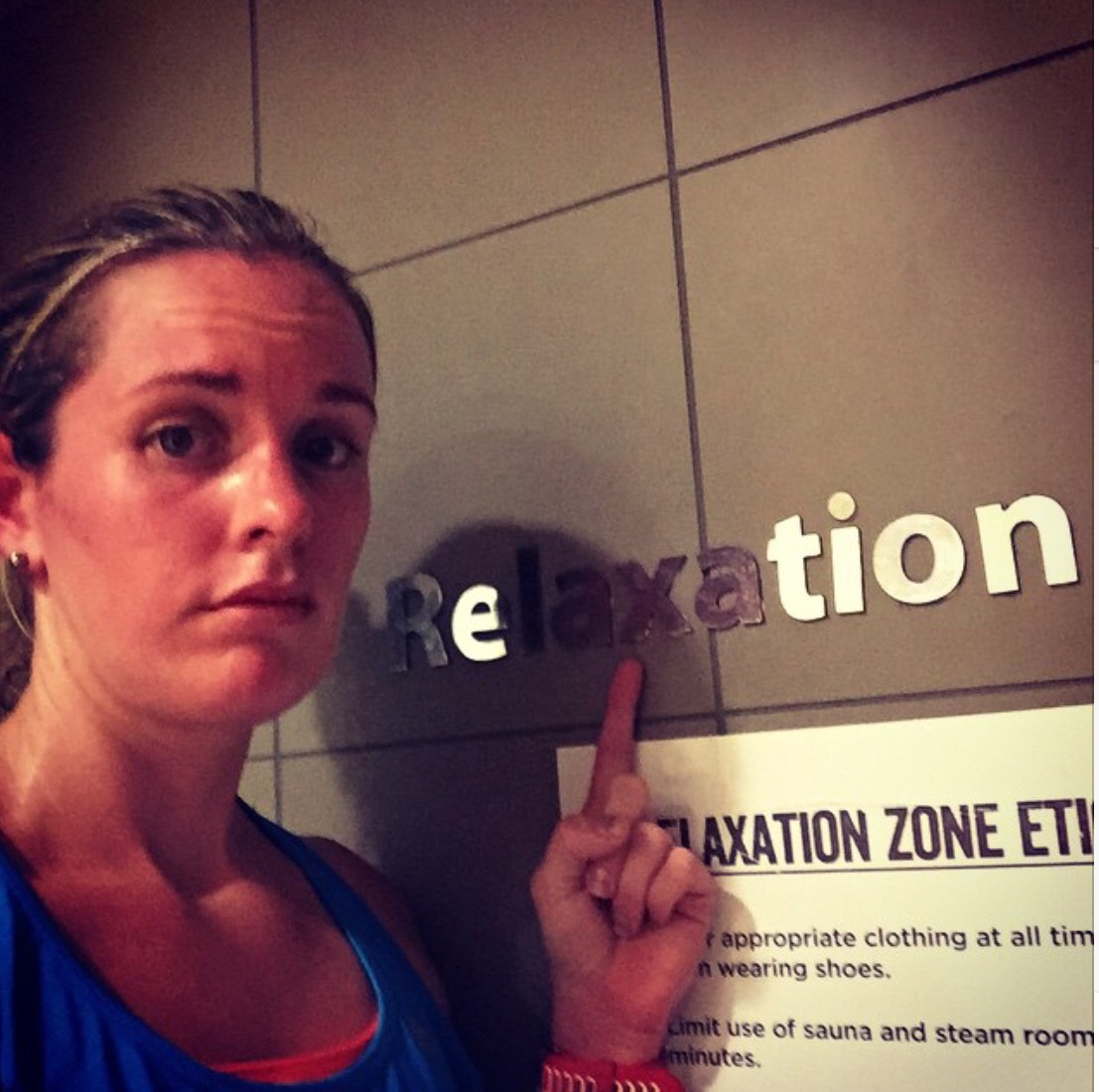 When I wrote this 52 in 52, I had a scenario in mind: holidays, relaxing, nice sauna. Realistically, I knew that it would probably mean that I would use the opportunity to relax in the gym sauna after a workout.

There was no hotel or a holiday in sight when I completed this one.

Tuesday morning I managed a run at the gym, however as my energy levels are still a bit off I was only able to manage 3km before walking the last 2. In saying that, according to my Garmin I was running 5.5min kilometre splits, a full minute faster than my regular pace, so I may just have very well been going too fast. Given the treadmill was at my regular pace though, I doubt it.

Exhausted, I thought I would take the opportunity to use the sauna. I had a quick look, and read the etiquette which said to “refrain from wearing shoes”. I cursed myself for not having thought to bring some flip flops, since it meant I would be putting on gross sweaty socks afterwards, but it was now or never. I quickly snapped the above photo to mark the occasion (being that I had the sexiest gym face ever), put all my gear in a locker and headed on in.

I knew it would be hot, but I just wasn't prepared for how freaking hot.

I took in a bottle of water with me and it was a godsend. Thanks to the outer layer of the bottle it remained incredibly cool the whole time…or maybe I was just cooking and it felt cold when it was probably lukewarm. Whatever, it was awesome.

There was another girl in there as well, and I was amused to see that she was wearing shoes.

At first I sat on the top level, but realised that my facial features were slowly obeying gravity and would soon form a puddle on the floor so I decided to move one level down. It was much better. I leaned up on the wall and stretched my legs out in front of me, closed my eyes and focused on not breathing through my nose so that I didn't lose all my nose hair. Relaxation is focusing on not burning alive, right?

A couple of minutes later the girl left and I was alone. I had previously read an article about another gym member saying how much she enjoys stretching in the sauna after a workout, so thought I would use the opportunity to stretch my legs. I am extremely thankful no one else entered the sauna at that moment. Otherwise they would be shocked, I would feel awkward and say stupid things, and it would just be a prime moment to blog. Sneaking my stretches in, I sat down for a few minutes more before deciding it was enough and it was time to leave.

The temp of the air after I walked out felt like pure heaven.

I'm happy to report that my legs did feel much better that afternoon, so perhaps there's some merit to the sauna stretch. I'll have to try it after I've done a legs day with the weights and see just how much it helps. Given that I haven't done serious leg weights in a while, it is going to hurt.

Does anyone else regularly use a sauna as part of a health & fitness regime?