I love reading blogs, almost as much as I enjoy writing on my own. There’s nothing better than sitting down with a cuppa, putting my feet up and starting to read through the latest (courtesy of Feedly I can subscribe to blogs and just browse through the latest posts on all the different sites, right from one place). There’s something so enjoyable about just observing someone else’s life and learning through their experiences.

Obviously you must enjoy reading blogs too, otherwise you wouldn’t be here!  [...]  read more

Yesterday I was doing a bit of tidy up for my blog, and found links to blog posts I’d written in 2004.

Holy smokes batman! I can’t believe I’ve been writing that long! It made me think of all the times I’ve spent pouring over a computer, or tablet, or phone. So I thought I’d revisit a bit of history, and how my blog has evolved since the beginning.

My sister set me up with a blog way back in the beginning. It was hosted as a page on her own blog, and lacked its own identity.

At the time I was doing a Diploma of Justice course. I figured I could write some articles about what I was studying, and dip my toe into the pool of political writing I guess. I wanted to be a Forensic Scientist, and thought there would be a lot of interesting topics to share.

Instead, I wrote a tongue-in-cheek article about the people in my class.

Back then I was using Moveable Type, a CMS platform for managing my blog. It worked OK. I wasn’t very tech-savvy back then either, so I pretty much did what my sister told me to do. She was also my systems admin, and would update the software as required, and anything else that went wrong.

The move to wordpress

At some point, my sister decided to move to WordPress. As always, I just followed along. She took care of it all for me, and provided me with the login details.

Suddenly, my interest in the CMS system was born. I installed things, broke things, and generally drove my sister crazy.

Themes, install ALL the themes!! That plugin does what? I must install it!

Moving to my own domain

In 2012 my sister’s domain name eventually lapsed, and someone jumped on the opportunity to steal it from her. Thus the blog was gone. By this stage I was blogging maybe once a year, and my interest had really waned. No one was reading it, I wasn’t marketing it, and I was probably writing completely uninteresting and uninspiring posts.

My sister set up her new site, and decided it was time for me to pull on my big girl pants and get my own domain.

Once again, she did all the hard work for me. She created and configured all the accounts and copied across a backup of the old site. The new URL? kelsbells.id.au; where my blog remains to this day.

At the start of 2013 I decided it was time to invest in my blog a little. There was a lot of things going on in my life, and I needed somewhere to write things down.

But first, everything had to go.

All of my posts, 9 years worth, trashed in an instant. I wanted a clean slate.

I struggled with a title, and ultimately decided on Kelly’s World. I’ve toyed with the idea of changing the name of this site so many times, but in the end I always come back to this. It is my world.

As fate would have it, 2013 decided to be quite a big, emotional year for me. I split up with my partner at the time, moved into a new house, took on a new role at work and spent a lot of time “discovering who I am”. I also met my now-husband, and fell in love.

Everything was documented on Kelly’s World.

Going public with my blog

Up until this point only a few close friends knew that I had a blog, and had the link. I had felt a little embarrassed I guess. I felt like it was a bit dorky.

But at the end of 2014  I decided I wanted to share it with everyone. It was about becoming confident in who I am. I didn’t want to have secrets, or hide anything I was passionate about.

My posts began to be automatically posted through to Facebook to my friends and family, and on twitter.

Concerned that maybe people were being bombarded with Facebook posts they weren’t interested in, during 2017 I decided to make a Facebook page. This way, people could opt in to seeing the posts and what was out there.

The Kelly’s World page was born.

This allowed me to start to grow the audience of my blog, while separating it with my personal profile. People that enjoyed my blog but weren’t necessarily a friend on my private profile page could like it. I could write small little updates or share images that weren’t really relevant to my individual profile. I could start to build a little community.

It’s been slowly growing ever since.

In October of 2017, the blog was rebranded. I made a custom header that I felt demonstrated my interests.

I still haven’t finished, but with a baby my time has been minimal. The plan is to eventuallyredesign the site with a new layout, but it will take me some time. First I need to finish my course on front-end development so I can put my skills to good use!

The blog has grown up a little bit too. My sister no longer plays systems administrator, which I’m sure she’s greatly relieved about! That’s pretty much due to my job, where I now work in an eCommerce department. I’m a lot more tech-savy, and understand a lot more about websites. I manage the site myself, and if I break it? We’ll, that’s on me to fix.

On top of that, this week I’ve implemented advertising on my blog for the first time.

My goal is to hopefully make a little bit of money doing what I love. For the last 6 years I’ve been paying for the hosting of this site and domain as a hobby. If this site grows like I plan, there’s a good chance it’s going to become expensive to maintain.

However, I don’t want to be annoying, so I need your feedback. I’ve created a survey below, and would appreciate your honesty regarding the advertising. Tell me what’s annoying, and what’s not. Tell me what your boundaries are. Let me know when the experience of reading my site is no longer enjoyable.

And finally, thank you…

Thank you to everyone who chooses to follow my journey. I’m forever looking at the stats, and feel a sense of pride every time the number increases. This blog is the documentation of my entire life. There’s nothing on here I feel ashamed of. There’s been emotional posts (breakups), joyful posts (marriage and my child), posts with doubt (figuring out how to be a mother) and posts with confidence. It’s been with me through the most monumental times of my life. When I grew up and finally became an adult, Kelly’s world was there with me.

Thank you all for reading and staying with me.

In preparation for maternity leave I’ve started to put more effort into my blog. I want to try and capture as much of these memories as I can, along with the emotional ride that’s going to come with it. I figure it will be my creative output when most of my life will shortly become a combination of feeding, changing nappies and lack of sleep.

When I started this blog (thank you sister), it was an outlet for me. It was somewhere to work through my thoughts. At the time I didn’t care about who was reading it, it was just somewhere for me personally.

As time went on, I realised a number of things: 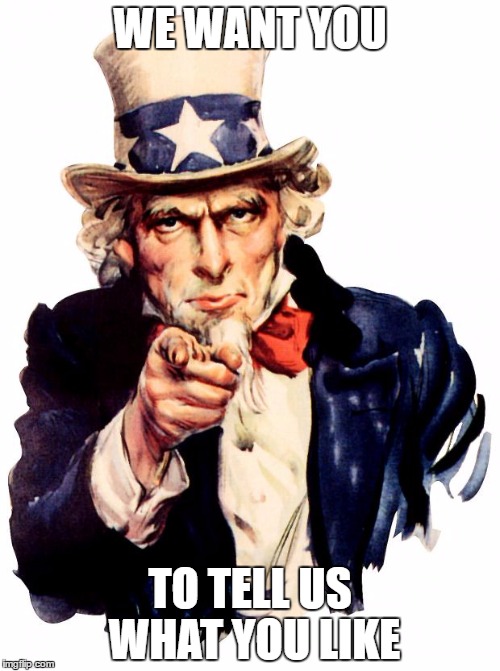 I’m going to stop with the sarcasm here for a minute, and just say a truly heartfelt thank you.

I was blown away by the results of the survey. To be honest, I didn’t actually expect a single response, and was so thrilled when they came pouring in! I genuinely didn’t know why people came to read what I had to say. So many of you took the time to go into detail, which was fantastic. There were so many lovely compliments at the same time (way to make me blush). It was overwhelming in a positive way, so thank you so much for making this motor mouth speechless. Well, for a second anyway.

I thought I would share some of the findings with you: 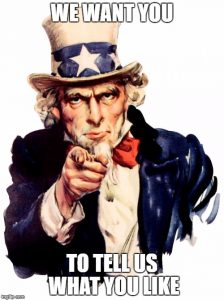 See here’s the thing right. On my blog I do a bit of a brain dump of whatever comes to me on the day. It could be anything, like a story about accidentally falling on a razor and cutting my butt open (seriously happened when I was 15, but I never wrote about it) or just about my latest tech toy that I’m obsessed with. It’s great for me to get the stories out of my head (not great if I had a historical trail of butt cuts), but I actually have no idea what you guys enjoy reading. A large part of this blog is the enjoyment I get from seeing you guys enjoy it.

So…I have a big favour to ask.

Please share with me what you enjoy, what you hate, and everything in between. I’ve made up a survey, it’s only 5 questions so it’s not so bad. I would seriously love you all if you took a minute to share it with me.

I promise I’ll have no idea who you are, so be as brutal as you like. I reserve the right to cry like a baby.